Love Never Dies
Music by Andrew Lloyd Webber, lyrics by Glenn Slater
Additional lyrics by Charles Hart
Book by Andrew Lloyd Webber & Ben Elton with Glenn Slater & Frederick Forsyth
Produced by The Really Useful Company Asia Pacific & Arts Capital Trust
Regent Theatre, from May 28, 2011
Reviewer: Kate Herbert
Stars:****
Simon Phillips’ extravagant production of Andrew Lloyd Webber’s Love Never Dies infuses new energy into the musical with its vivid design, eccentric characters and mystical imagery.
The result is a ravishing, atmospheric spectacle that recreates the fantasy and dark mystery of a 1907 fairground, leaving even a sceptical audience gasping. Even a die-hard Phan may be converted.
The Phantom (Ben Lewis), ten years after his abduction of Christine (Anna O’Byrne), is now a wealthy impresario running Phantasma, a vivacious, Coney Island attraction. He lures Christine, her husband, Raoul (Simon Gleeson), and son, Gustave (Kurtis Papadinis), to Manhattan, tricking her into singing in Phantasma.
Ben Lewis is a formidable presence as the Phantom. With his velvety tones, impeccable vocal control, superb range and consummate acting, his performance rivals former Phantoms. His thrilling opening rendition of ‘Til I Hear You Sing sends the crowd wild and no song that follows meets this level.
Anna O’Byrne’s beautiful soprano is a perfect match for Lewis in their duets, Beneath a Moonless Sky and Once Upon Another Night. Her version of Love Never Dies is affecting.
The Beauty Underneath is a surprising, rock number sung by Lewis, Papaginis and the distinguished ensemble. Sharon Millerchip is delightfully cheeky performing Bathing Beauty as Meg Giry. Lewis and Gleeson’s love rivals’ duet, Devil Take The Hindmost, is powerful and Gleeson’s solo, Why Does She Love Me?, is an emotional moment for this character.
Gabriela Tylesova’s design provides another hero. Soaring gantries, a giant Phantom mask and occult imagery, illuminated by festoon lighting (Nick Schlieper), conjure a timeless, perilous fairground. The period costumes are high gelati in colour, evoking both freak shows and 1900 European elegance.
Phillips saturates the stage with sideshow freaks, acrobats and impish dancers performing Graeme Murphy’s raunchy choreography. Sometimes it’s so busy it’s hard to know where to look.
Lloyd Webber’s score intermittently and elegantly reprises the original Phantom, connecting the two stories. His composition and orchestration, conducted skillfully by Guy Simpson, have some powerful moments.
However, several songs lack punch and some lyrics are trite, with some tunes neither unique nor memorable: Look With Your Heart, Beautiful, Only For You and Dear Old Friends. Placing two love duets (Beneath a Moonless Sky, Once Upon Another Night) back-to-back is unnecessary and unsuccessful.
The big problem with this sequel is the muddled, unsatisfying story that lacks dramatic tension and a clear narrative arc. The stakes are not high enough and keep changing, there are unnecessary red herrings and too many villains. The central character, the Phantom, is now ordinary, lacking menace and mystery. The final tragic scene loses impact without a clear narrative structure leading to it.
Raoul’s role and his relationship to Christine are seriously underwritten. There is little evidence of the history of their love and a duet for the couple is sorely missed. Madame Giry’s (Maria Mercedes) role in the story keeps changing and Meg’s final jealous rage is surprising, if not unlikely. The child, Gustave, could be in greater danger and the centre of bitter rivalries but this thread unravels.
While this musical spectacle sets a new, visual design standard that will be difficult to surpass, it is disappointing that its narrative and music fail to reach the same lofty heights.
By Kate Herbert
Posted by Kate Herbert at 12:30 No comments:

Macbeth
MACBETH, Australian Shakespeare Company, Shed 4, Docklands, until May 28, 2011
"THIS place is too cold for hell," slurs the drunken Porter (Ross Williams) in Shakespeare's grisly play Macbeth.
He's right. The Docklands location for Glenn Elston's winter production is colder than a Scottish castle. But if this makes for an uncomfortable evening, the harsh environment evokes Macbeth's primitive world.
The audience is herded around the cavernous warehouse to stand (or sit if you hire a chair), and on elevated stages we witness bloodthirsty Macbeth (Doru Surcel) and his soldiers and lords -- all bare-chested, tattooed, bloodied and costumed in leather and fur.
Surcel has the ferocity and dark looks for the title role, but his delivery of the language is often laboured with misplaced emphases in the verse.
Terri Brabon, as Lady Macbeth, is passionate and sensual. However, the balance of the narrative is askew and the trajectory of the psychological collapse of both Macbeth and his wife feels awkward. Williams’ Porter provides welcome comic relief in this relentlessly gloomy and violent play.
Brendan O’Connor gives a consummate performance as Macduff, performing the verse with truth and skill. His portrayal of Macduff’s grief at the murder of his wife and babes is profoundly moving.
Stars rating: ***
Posted by Kate Herbert at 12:35 No comments:

In our country and in this generation we take for granted safe childcare, single parent’s benefit and child protection laws. However, in 1892, circumstances were different for young, single mother, Amber Murray.
Amber advertised for a carer for her baby, Horace, so she could work to support him. The respondents, Agatha and Charles Makin, proved to be a parent’s worst nightmare. What followed was a landmark court case.
Although it is an unlikely topic for music theatre, The Hatpin is a new, Australian musical based on Amber’s tragic story. The tale certainly has dramatic potential and some of this is realised in this production. The singing voices are the strongest element with some powerful vocal performances. Gemma-Ashley Kaplan as Amber has a pretty voice and Samantha Morley as her supporter and friend, Harriet, has great passion and expressiveness in her singing.
However, the acting style and the direction by Shaun Kingma tilt too far into the melodramatic and histrionic. The scenes show an awkward balance between tragedy and comedy, the characters are thin and the dialogue often clumsy.
There are some rousing songs by Peter Rutherford and James Millar with strong chorus work by the support cast. Rutherford’s score has some successful moments but the arrangements at times have an imbalance between percussion, string and wind instruments.
We are crying out for Australian musicals so give this a look if you are keen to see new developments in local talent.
Stars: **1/2
Posted by Kate Herbert at 19:31 No comments:

Review: Next to Normal, MTC
Next to Normal, Melbourne Theatre Company, Arts Centre Playhouse, until June 4, 2011
NEXT To Normal is not your normal musical.
Its subject matter is distressing, its characters are dysfunctional and the ending is not necessarily happy. But this Tony-award winning show, while exhausting, is exhilarating. A sensational show that breaks plenty of rules.
Next To Normal is about Diana (Kate Kendall), a suburban mother with manic-depression and delusions, and the impact her illness has on husband Dan (Matt Hetherington) and daughter Natalie (Christy Sullivan).
Tom Kitt's songs about grief and drug treatment are wrenching, but often funny and uplifting, while Brian Yorkey's book tells Diana's grim story without lapsing into sentimentalism.
Director Dean Bryant sets a cracking pace for this Melbourne Theatre Company production, while musical director Mathew Frank leads the six-piece, on-stage band.
The cast of six is consistently strong, creating credible characters, thrilling harmonies and moving relationships. Their impeccable articulation makes the lyrics and the story supremely clear.
Kendall plays Diana with great sensitivity and grace, investing the role with dignity and singing with great expressiveness, though her voice lacks some dynamic range and vibrato.
Hetherington is exceptional as Diana's beleaguered husband with his rich, warm, thrilling voice.
Sullivan, Bert LaBonte, Benjamin Hoetjes and Gareth Keegan all provide fine voices and strong characterisations.
You may feel overwhelmed if you're close to someone with a mental illness, but this is a challenging and unusual musical.
Star rating: * * * *
Posted by Kate Herbert at 14:16 No comments:

Source: Supplied
The Laramie Project: 10 Years Later, Red Stitch Actors Theatre, until May 28, 2011
THE Laramie Project: Ten Years Later revisits the docu-drama by Tectonic Theater about the 1998 murder of young gay man Matthew Shepard in Laramie, Wyoming.
The theatre company, as with the first play, constructs this script from interviews with the Laramie community. This second play not only researches attitudinal changes 10 years later but also investigates the conventions of rumour.
It uncovers the way people reframe memory, adapt stories, jettison unpleasant facts and abandon truth to make the retelling of history more palatable.
Nobody wants their town to have the reputation of being a home to bigots, racists and hate crimes, but this play is didactic and educational.
We witness attitudes from blinkered, racist bigotry to radical activism, but are not emotional participants --
kept at an arm's length from the pain, guilt and grief.
Performances from the cast of nine, directed by Gary Abrahams, are unembellished, powerful and clear, using direct audience address. Cast members play multiple roles as both theatre company researchers and Laramie residents.
The style is reminiscent of 1980s political theatre in Australia, UK and Canada. The US took time to catch up. The tiny, restricted stage, unfortunately, is cluttered with large screens that are constantly moved by actors. The play cries out for open space, different levels and a deep, panoramic view to allow characters to observe and be observed.
This claustrophobic quality, though intentional, does not serve the play.
Star rating: * * * 1/2
Posted by Kate Herbert at 14:18 No comments: 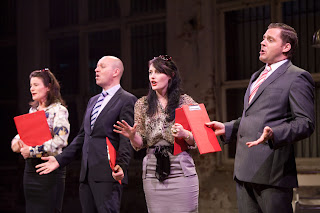 Gabrielle Quin, Michael Dalley, Sharon Davis, Lyall Brooks in Urban Display Suite
Do you have contact with real estate agents, inspect houses, drool over interior design magazines, dream of a “renovator’s delight” or laugh at garish McMansions? Michael Dalley’s satirical, musical cabaret, Urban Display Suite, is just the ticket for you.
The cast of four (Dalley, Lyall Brooks, Sharon Davis, Gabrielle Quin), dressed in slick, corporate gear, carrying clipboards and mouthing platitudes, sing Dalley’s scathing and hilarious lyrics. The opening number says it all: “It’s the white collar job for the blue collar brain.”
The jokes come thick and fast in sketches and songs about Australians’ obsession with buying property, “our national drug of choice”.
Dalley and Brooks are particularly funny and engaging. The songs range in style from latin beats, to sultry ballads and blues numbers accompanied by John Thorn on piano and accordion. The titles include: If You Bought Before the Boom, Upmarket Woman, Downmarket Man, One Day This Will All Be Mine and New Money.
There are gags about the fact that you can’t buy taste, that crummy houses cost the earth now, the cool suburbs, lifestyle choices and marketing ploys. Get along and enjoy this “tribute to the little capitalists we’ve become”.
Posted by Kate Herbert at 12:38 No comments: