The Maids: Images by Joe Calleri
Images only, as I did not see this production, KH 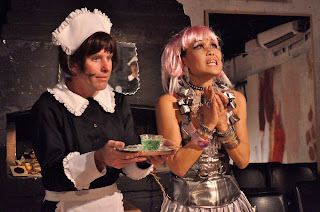 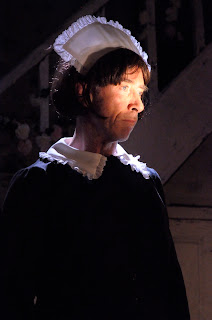 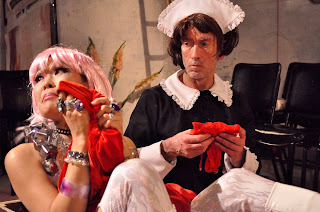 Posted by Kate Herbert at 12:28 No comments:

Circle Mirror Transformation, Melbourne Theatre Company *** 1/2
CIRCLE MIRROR TRANSFORMATION, MTC Theatre, Lawler Studio, until September 17
IF YOU run a drama class designed to make people unzip and reveal their innermost secrets, be sure you and they are equipped to manage the ensuing exposure and trauma.
Annie Baker's play Circle Mirror Transformation peers voyeuristically into such a community drama class in a fictional American town.
The class starts innocuously and hilariously with amateur teacher Marty (Deidre Rubenstein) leading a disconnected group in a series of banal exercises in storytelling and self-awareness.
Drama can be used for personal growth, but lives can be immeasurably and irrevocably changed - and members of this group unravel before our eyes.
Director Aidan Fennessy balances comedy with drama, and a fine cast - which includes Roger Oakley as Marty's husband and Brigid Gallacher as a teenager - sensitively portrays characters at a watershed in their lives.
.


The short scenes and episodic structure become repetitive and the ending is somewhat incomplete, but this is entertaining with strong performances.
Star rating: *** 1/2
Posted by Kate Herbert at 13:54 No comments:

Review: Namatjira, at Malthouse Melbourne ****
NAMATJIRA, Malthouse Theatre, until August 28
This production provides us with a window into his life as a famous indigenous artist and Australia's first Aboriginal citizen.
His story is both uplifting and heartbreaking and Trevor Jamieson charms us, playing Albert himself and embodying the myriad characters that populate his world.
Namatjira - created by Scott Rankin with the Namatjira family - has heart, and its impact is increased tenfold by the presence on stage of several of Namatjira's grandchildren who quietly complete an enormous chalk landscape on the rear walls.
A striking, life-size portrait of Jamieson as Namatjira takes pride of place, and portrait artist Robert Hannaford intermittently adds touches of paint.
Derek Lynch is delightful playing multiple characters and his duet with Jamieson, singing Can't Get Enough of Your Love, was a comical highlight.
The lighter first half - peppered with tongue-in-cheek jokes about liberal, white, urban Australians patronising the indigenous and appropriating their culture - makes way for the tragic latter part of Namatjira's life.
Star rating: ****
Posted by Kate Herbert at 13:56 No comments:

Kismet, The Production Company ***
KISMET, The Production Company, State Theatre, until August 21
KISMET is a musical cheekily perched on a fence between musical genius and racist parody.
Written in the politically incorrect 1950s, it fearlessly satirises Arabic culture and glorifies Baghdad as the cheeriest town in Mesopotamia.
The score, adapted from Alexander Borodin's soaring, classical style, paints an exotic landscape, as does the parade of Arab emirs, sultans, poets, beggars, criminals and belly dancers wearing vivid costumes.
Terence O'Connell's production has some uneven acting and is a little coy, perhaps unwilling to emphasise such blatant, racial parodies; there is an imbalance between the Arabian Nights exotica and the modernity of the choreography (Alana Scanlan).
Gary Rowley's rich, velvety, classical voice is a fine fit for Hajj, the street poet, singing Fate among others. He captures some of Hajj's cheekiness. Janet Todd's soprano is clear and bright, bringing warmth to Masinah, Hajj's daughter.
Kismet features two enchanting romantic duets, Strangers in Paradise and This Is My Beloved, and Todd's voice is thrilling in both. There is plenty of colour and choreography and some fine music played by Orchestra Victoria.
However, the show lacks a cohesive style and chooses to take no risks with the politics of the Middle East that are embedded in the script.
Star rating: ***

Posted by Kate Herbert at 13:55 No comments:

Romeo and Juliet, Bell Shakespeare ***
ROMEO AND JULIET, Bell Shakespeare, National Theatre, St Kilda. Touring. bellshakespeare.com.au
BELL Shakespeare's production of Romeo and Juliet is adroitly edited to 90 minutes and specifically tailored to engage wriggly, high-school audiences with its sassy romance about two adolescents split by a family feud.
Director Damien Ryan sets the play in the 1950s, in a location that is a blend of a village in Italy and a small town in country Australia.
The characters play, sing Italian peasant songs, dance and brawl in a pit filled with red Mallee sand, while overhead clothes dry on washing lines reminiscent of those in Italian alleyways.
Some of the cast are pushing it vocally and are sometimes inaudible in a big theatre, and some songs are not connected to the text or Shakespeare's imagery.
But this is a fun, accessible and youthful production that is ideal for those new to Shakespeare and obsessed with love.
Star rating: ***
Posted by Kate Herbert at 14:01 No comments:

Review: Rising Water, by Tim Winton, for Melbourne Theatre Company ***
RISING WATER, by Tim Winton, for Melbourne Theatre Company. Arts Centre Playhouse, until September 10
THE three main characters in novelist Tim Winton's first play Rising Water live aboard their rocking yachts in a Fremantle marina.
They are avoiding not only the rowdy, boozy Australia Day celebrations, but their own lives and past sins.
Winton's dialogue is a collision of Aussie vernacular and dense, image-laden lyricism, but though his writing balances comedy and poignancy, the play lacks a dramatic arc.
The inner lives and public relationships of the trio, the capable acting of the three leads and Kate Cherry's imaginative and deft direction are the most successful components of this production.
John Howard is controlled and sympathetic as the quiet, melancholy, middle-aged Baxter, who hides from his grief and shame aboard his permanently moored boat, a metaphor for his stagnant life.
Geoff Kelso is a rare treat as Col, a scrawny, boozy bloke who uses blunt ockerisms to tease Baxter, while making no attempt to fix his mangled mast or launch his own yacht.
By contrast, Alison Whyte plays a refined, elegant Jackie, who may be booze-free but is as damaged and secretive as her neighbours.
British backpacker Dee (Claire Lovering) acts as the catalyst for Baxter's watershed experience and for the three boat-dwellers to share their secrets, but she is unlikeable.
Christine Smith's design is visually compelling with real yachts teetering on their moorings, but without a coherent dramatic structure, the script lets down the production.
Star rating: ***
Posted by Kate Herbert at 13:56 No comments:

SLAP on your dinner suit and Omega Seamaster, leap into the Aston Martin, cue theme music and prepare for James Bond overload in Bond-A-Rama.
Unless you've lived in an extinct volcano or underwater lair for 40 years, you know Bond movies, their ever-changing lead actor, treacherous villains, secret hideaways and whiz-bang gadgetry.
Bond-A-Rama is a clever spoof performed by Michael Ward, Stephen Hall, Emily Taheny and Lawrence Mooney playing myriad roles.
Director Russell Fletcher sets a cracking, car-chase pace, particularly for the first 20 minutes as the cast tries to recreate 22 Bond movies in one hour before the theatre explodes.
The low-budget opening credits are a hoot. Hall is a riot as Sean Connery playing 007. Mooney is a good villain and alarming as a bikini-clad, Bond girl while Ward plays a suitably tetchy M.
Taheny is a gem singing satirical Bond parodies and as panting Miss Moneypenny and various tough Bond broads.
The second half is bumpy, needing more movie parody and less chatter, but the show has plenty of laughs.
Star rating: *** 1/2
Posted by Kate Herbert at 14:04 No comments:

Silent Disco, by HotHouse Theatre **** 1/2
SILENT DISCO, presented by HotHouse Theatre at the Arts Centre's Fairfax Studio, until Aug 13, 2011
SILENT Disco, Lachlan Philpott's comic-tragic play about teenage angst, shines a harsh light on adolescents, teachers, parents and a society that has no clue how to deal with its troubled youth.
Lee Lewis's direction of Philpott's script manages to be both slick and raw. The pace is rapid, like a teenagers' party or a pop song, the dialogue has the rhythm of youth and the structure imitates the split focus of a 15-year-old unable to concentrate in class.
Philpott's writing incorporates realistic dialogue, impeccably observed characters and balances broad contemporary comedy with pathos and near tragedy. Scenes move quickly and Philpott intercuts smart dialogue with asides and the inner thoughts of the characters.
The cast give consistently passionate performances and are fully immersed in this production and committed to its story and characters.
Sophie Hansser is vivid and totally credible as Tamara, the wild and angry teen rejected by her mother and forced to live with her depressed, incompetent father.
As her bad-boy boyfriend, Squid, Meyne Wyatt shifts effortlessly and believably from bemused, confused adolescent to terrifying rage. Kirk Page is dangerous as Dane, Squid's imprisoned brother.
The versatile Camilla Ah Kin has impeccable comic timing and crisp delivery in multiple roles. She plays the caring teacher, Mrs. Petchall with warmth and honesty. Then shifts to comedy as Dezzie the checkout chick.
Philpott's play peers into the world of high schools and the fraught relationships between teachers and students, teenage lovers and siblings. He tells their stories sympathetically but with brutal honesty and no sentimentality.
Star rating: **** 1/2
Posted by Kate Herbert at 14:03 No comments:

Observe The Sons of Ulster, Hoy Polloy *** 1/2
OBSERVE THE SONS OF ULSTER MARCHING TOWARDS THE SOMME, Hoy Polloy, Brunswick Mechanics Institute, until August 13
WE are surrounded by wars all over our globe, but Irish playwright Frank McGuinness confronts us with a moving snapshot of eight young men who face the prospect of death in Flanders during World War I.
His play, Observe the Sons of Ulster Marching Towards the Somme, is a slice of tragic realism with splashes of comic relief.
These young soldiers from different classes and trades are all, it seems, Protestant, and most are bigoted against Catholics, despite the writer being Catholic.
We anticipate their bloody fate because the play opens with a long lament by the only survivor of the battle, the aged Kenneth Pyper (Ian Rooney) who is haunted by his fallen pals.
Although the acting is uneven and the accents slip occasionally, the cast and director Steve Dawson bring these doomed young men to life in an intimate way and we cannot help but think of other young men ruined by war or killed in pointless battles.
This is a play about friendship, love, survival, Irish identity and the futility of war.
Star rating: * * * 1/2
Posted by Kate Herbert at 14:02 No comments: