You may be interested in the return of When I Fall in Love: The Nat King Cole Story, starring Bert Labonte.  3 nights only at the Chapel off Chapel from March 8 to 10, 2012 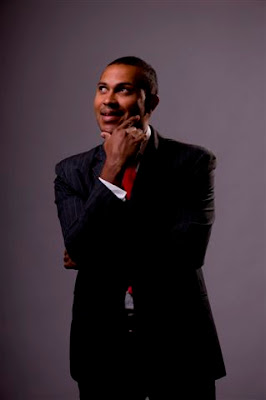 Bert LaBonte in When I Fall In Love: The Nat King Cole Story


Excerpt from my review of the first Melbourne season, December 14, 2011

BERT LABONTE launches a charm offensive on us with this homage to legendary, black singer, Nat King Cole, who attributed his silky tones to the three packs of Kool cigarettes a day that eventually killed him.

When I Fall In Love is a musical journey through Cole’s life from his humble, Alabama childhood as the son of a preacher, to playing jazz piano and singing in bars, his television show and rise stardom, his womanising and failed marriages.... 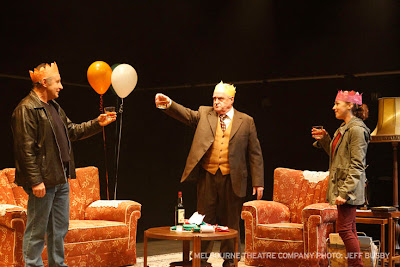 There is theatrical potential in The Seed, Kate Mulvany’s play about her investigation into her Irish-English-Australian father’s experiences as a Vietnam veteran and her rabid Irish grandfather’s anti-English, pro-IRA sentiments.

There is some very funny dialogue in the first half, particularly from Gillies as Grand-Da, and we are interested in the family’s secret history, fraught relationships, personal wounds and Danny’s PTSD.

However, there are significant problems with both Mulvany’s script and Anne-Louise Sarks’ production.

This self-referential play constantly reminds us that it contains details from Mulvany’s life, but it is unclear whose story it is: Rose (Sara Gleeson), her father, Danny (Tony Martin) or her Grand-Da, Brian (Max Gillies).

The structure of the play is awkward, the through-line is unclear and Rose’s ‘step-out’ narration, inserted uncomfortably between the scenes featuring all three characters, does not advance the story or illuminate issues in any significant way. 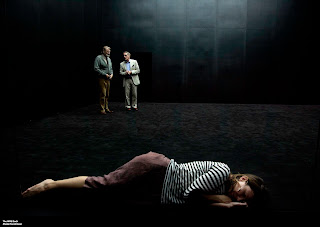 The great strength of this adaptation of Henrik Ibsen’s five-act play, The Wild Duck, is the exquisitely balanced, sensitively wrought performances.

The script (Simon Stone, Chris Ryan) condenses the action, sets it in the contemporary world, reduces the number of characters and uses colloquial, accessible dialogue.

It is about the damage wrought by a long-held secret being revealed to a family that cannot handle its repercussions.

Gregers (Toby Schmitz) returns to his father, Werle (John Gaden) to find that his old friend, Hjalmar (Ewen Leslie), is married to Gregers’ father’s former lover. Gregers believes that by exposing this secret he will set everyone free. Wrong!

The multiple short scenes are cinematic and the extreme naturalism of dialogue and acting is heightened by the stark emptiness of the set (Ralph Myers).

Stone’s abstract staging removes specific locations, dropping actors into an austere, carpeted room surrounded by walls of glass through which we peer like voyeurs.

The direction is slick with a balanced pace and, although the audience may initially feel alienated from the action, we are slowly drawn through the glass walls as the characters’ tragedy unfolds.

This is a family drama of the kind we see on television, with intimate relationships exposed. However, short scenes and idiomatic quips interrupt the dramatic tension of Ibsen’s escalating tragedy so that, although we are touched by the final catastrophe, the drama is less affecting.

This tragedy lacks that desperate juggernaut of inevitability inherent in a story about a poor choice that sets uncontrollable events in motion.

The adaptation loses the elegance and intensity of Ibsen’s language and replaces it with more mundane, middle class banter.

We all recognise the devastation wrought by Black Saturday but in Christine Croyden’s play, A Fallen Tree, that cruel blaze could not burn away the secret horror hidden by young Hannah’s (Libby Gott) family.

Croyden approaches the aftermath of the fires from an acute angle by not exploring the actual bushfire, but revealing the emotional fragility of Hannah and her younger sister, Lily, who is a constant presence despite  never being seen on stage.

The revelation of the shocking truth of family abuse provides dramatic tension in the latter half but Croyden’s dialogue in the first half is sometimes rambling or banal.

The acting, however, is uneven. Dyer looks uncomfortable as John, Gott plays on one emotional note throughout but Burton gives a more nuanced performance. 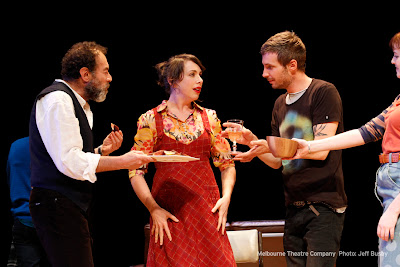 
THE DEAF COMMUNITY MAY BE VIEWED as a separate, sometimes ostracised tribe in the broader community but, in Tribes, Nina Raine also explores the hierarchical, discriminatory internal relationships inside the Deaf tribe.

Raine’s play, directed capably by Julian Meyrick, features dynamic, hilarious or moving scenes and cunningly written, witty dialogue but the play in its entirety is unbalanced, various narrative threads do not converge coherently and the incessant conflict is exhausting.

Raine underscores rather too heavily her point that our world is riddled with multiple, valid languages – speech, books, digital media, radio, opera, signing, semiotics – and with the endless repetition of this notion, she seems to be shouting, ‘The Deaf have a valid language too!’

The play is about a dysfunctional family that spends its time in verbal warfare, defending opinions, hurling criticism, firing insults and protecting intellectual positions and individual life choices.

Silent amongst this seething pot of family conflict is youngest son, Billy (Luke Watts), the deaf boy who is left out of conversations despite, lip-reading, speaking and wear hearing aids.

When Billy meets Sylvia (Alison Bell) who is slowly losing her hearing but is fluent in sign language because her entire family is all deaf, he not only falls in love with her, but with the Deaf community.

The repercussions are overwhelming for the family, who are confronted by Billy’s new independence and his rejection of their unintentional treatment of him as an outsider. 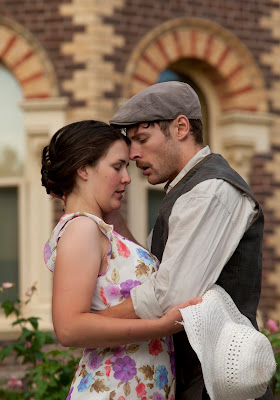 D.H. LAWRENCE'S NOVEL LADY CHATTERLEY'S LOVER, was scandalous in its time and Glenn Elston’s adaptation captures its boldness, sensuality and dense, passionate prose in this outdoor romp staged in the grounds of our grand Rippon Lea mansion.

This 2012 production has more comedy than last year’s, with more cheeky winks at the audience, broad characterisations and playful interactions between characters that work well in the outdoors.

I would argue that there is still too much of Lawrence’s prose used as narration between scenes and that some of it could be converted to dialogue. The long, opening scenes that provide narrative background for Connie and Clifford could move more quickly to Connie and Mellors affair, the core of the play.

Caldwell’s Mellors is youthful and muscular, played with a fine balance of sullen, Derbyshire workingman, playful, seductive lover and mischievous taunter of the ruling class.

Nicholls, starting as the sexually unfulfilled Connie, shifts from prudish and cool to full-blooded, confident sensuality and rebelliousness.


LA VIE IS THE THIRD SHOW I’ve seen by Montreal circus company, Les 7 Doigts de la Main, (7 fingers of the hand), and the programme of acts certainly embodies the dexterity and absurdity of a 7-fingered hand.

This black comedy does not features all of the company’s 8 original artists, but it boasts some spectacular acts, although this version could be more effective and cohesive without a few of the later routines.

The sadistic, almost demonic Master of Ceremonies, Philippe Trepanier, wielding an elaborate cane, introduces us to his cosmic waiting room. It is Purgatory for those newly dead who arrive on the cheerfully named La Vie (Life) Airlines because La Mort (The Dead) Airlines would not fly with customers.

For the entire show, the MC torments Adam Kuchler, the newest arrival, and initiates him into the afterlife by confronting him with case studies of other deaths presented as circus acts. Case # 73, however, is an unsuspecting audience member.