PURISTS CRAVING CAT STEVENS’ (AKA Yusuf) distinctive voice may be disappointed with his musical, Moonshadow, but its repertoire of his classic songs will satisfy many nostalgic Baby Boomers while its fantasy narrative and Tim Burtonesque design will delight their grandchildren.

On the imaginary planet Alaylia, the inhabitants live in cold darkness without sun or birdsong and with only the moon and precious balls of manufactured Ember to light their lives.

Young hero Stormy, played with youthful exuberance by Gareth Keegan, embarks on a quest to find a mythical world of light and joy, leaving his childhood sweetheart, Lisa (Gemma-Ashley Kaplan).

It’s is a classic hero’s journey combined with a Romeo and Juliet love story, with universal themes about overcoming adversity, good versus evil and light versus darkness.

However, the story, particularly on his journey is incoherent, the expository and laboured dialogue needs slashing, the attempts at humour are feeble, the pace and cueing are slow, and the capable actors sometimes look uncomfortable.

Yusuf’s original, timeless melodies and poignant lyrics provide the heart and soul and the glue for the narrative. The problem is that, there are too many songs (41) and many are only fragments that do not advance the story or characters. 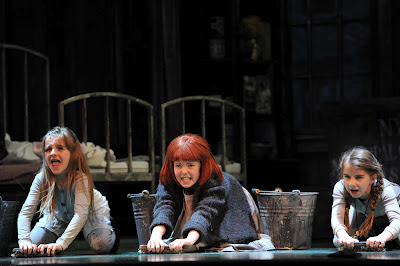 ROBERT REID'S FAST-MOVING, EPISODIC PLAY, On The Production Of Monsters, hurtles off on a tangent from the political and media scandal that surrounded Bill Henson’s photo of a nude girl.

When cool, inner-city couple, Ben (James Saunders) and Shari (Virginia Gay) unwittingly forward a revealing photo of a naked girl to a keen, young journalist, they are catapulted into a national media scandal and police investigation.

Reid challenges the audience, making us experience vicariously the horrors of being accused of a crime that we have not committed but, meanwhile, forcing us to address our own opinions, prejudices and actions.

Occasionally, Reid’s smart, swift repartee has the whiff of sketch comedy, but his script has a clever dramatic arc, gritty narrative and witty dialogue.

Gay and Saunders provide exceptional performances, playing multiple roles and peopling the stage with a parade of diverse, recognisable, urban types, victims and villains, the powerful and the helpless.