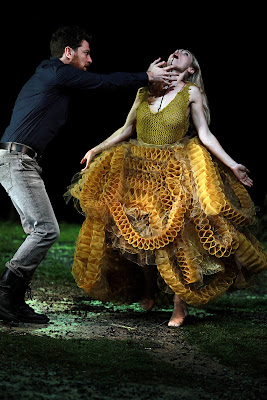 In Shakespeare’s Macbeth, the title character murders his King, driven by his insatiable desire for unbridled power that is fuelled by the witches’ prophesy and by his ambitious wife’s goading.


Peter Evans’ production of The Scottish Play strangely lacks the overwhelming sense of menace and horror essential to this play.

He overlays stylised, slow motion movement (reminiscent of Japanese Butoh) that distracts the eye and interrupts the narrative, rather than illuminating Macbeth’s inexorable journey into violence.

Dan Spielman’s Macbeth begins as an ordinary man returning from the battlefield, but gradually morphs into a crouching, contorted, grimacing, spidery creature with a bloodlust.


However, Spielman’s permanent, half-crouching position weakens the character’s physical presence and his vocal delivery reduces the dynamic energy of the poetry, leaving Macbeth with a less than palpable power.

Spielman is a capable and interesting actor but is miscast in this role and would perhaps be better suited to playing a feisty, young Malcolm.

Kate Mulvany is a passionate Lady Macbeth who burns like a hot flame initially, manipulating her mercurial husband with her sexuality then emasculating him with her harping criticism.

Mulvany enlivens Shakespeare’s famous speeches, particularly in the first half, and her early scenes with Spielman resemble prowling tigers circling each other before they pounce.