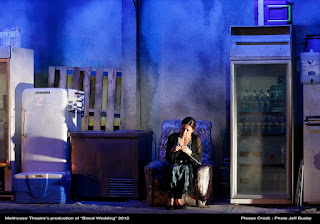 PICTURE A SPANISH WEDDING where the bride runs off with her married, former boyfriend, and you have Blood Wedding by early 20th century Spanish playwright and poet, Federico Garcia Lorca.

Marion Potts directs his bloody revenge tragedy and poetic dialogue in this bilingual production that features Australian and international actors.

Some of Lorca’s poetry is lost in the updated dialogue but the translation of his longer speeches captures his lyricism and the expressive use of Spanish language maintains his impassioned tone.

The sweltering Spanish heat is palpable in the cavernous space with its dusty floor of golden gravel (The Sisters Hayes) and pools of hazy light (Paul Jackson) evoking the arid, blasted landscape that provides a mocking background to the doomed marriage celebration.

The performances are uneven, but standouts include the dignified Mariola Fuentes as the forbidding widow, mother of the groom, whose pessimistic warnings predict the catastrophic wedding and ensuing blood letting.

Irene del Pilar Gomez as the Sister-in-Law and Beggar Woman is wild and provocative, while the compelling Ruth Sancho Huerga as the servant is vivacious and funny. 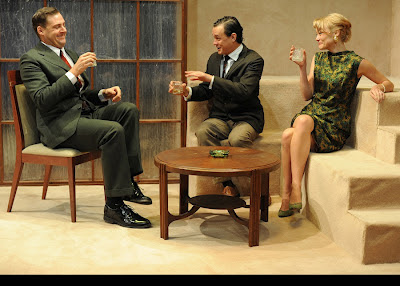 THERE IS A SURPRISING SHIFT from cleverly wrought comedy to grim, menacing drama during The Pride.

In the second unrelated and contemporary story, another Oliver (Geuerens), who is addicted to anonymous sex, scrambles to rescue his relationship with his lover, Phillip (Brooks), who cannot accept Oliver’s repeated promiscuous dalliances.

The stories, separated in time, both raise the fraught issues of infidelity, lovelessness, denial, the dark underbelly of human sexuality and the growing acceptance of homosexuality.

Brooks has impeccable comic timing and delivery and also a firm grasp of the dramatic, playing with sympathy both the closeted, conservative 1950s Phillip and his modern, warm and loving counterpart.

Geuerens’ 50s Oliver is open and generous while his modern Ollie is entertainingly pettish, indulgent and manipulative, although occasionally Geuerens’ articulation and accent loses clarity.

The Marriage of Figaro is one of Mozart’s most popular operas and, although this production has some accomplished singers and a polished orchestra, Jean-Pierre Mignon’s direction is conventional and unimaginative, lacking the shifts in comic and dramatic tempo that characterise this opera.

Richard Gill deftly and assuredly conducts the lively Ludovico’s Band, a baroque ensemble that lends authenticity by playing Mozart’s complex orchestrations on instruments known during his period, providing a different tone from that of a contemporary orchestra.

The action takes place in 24 hours when Figaro (Andrew Collis) is to marry his sweetheart Susanna (Jacqueline Porter) but his master, Count Almaviva (Brett Carter) asserts his ‘droit du seigneur’, a rule permitting him to bed Figaro’s bride.