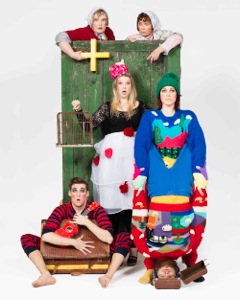 One great advantage of seeing Short and Sweet Theatre, a festival of ten-minute plays, is that if you don’t like one of the plays, there’ll be another drama or comedy starting in ten minutes.

Fortunately, this first week of the Top 30 boasts a thoroughly enjoyable and diverse program of nine short scripts, all of which are well structured with simple narratives, clear dramatic development, quirky characters and interesting concepts.

In some of the productions, the acting or direction is uneven and the characters and dialogue are less fully developed, making some pieces more successful than others.

The highlight is In the Parlour (Jenny Lovell, Anna Renzenbrink), a fully improvised, genuinely hilarious piece featuring two 19th century women obsessing over the minutiae of their sheltered lives in the parlour.

Another successful piece is 50 Guns by Alex Broun, in which a girl (Hayman Kent) recites a shocking litany of gun crime statistics and victims, until finally she reveals her own childhood involvement in an accidental shooting.

While Rowan’s play has a strong premise, some well-observed dialogue and credible characters, its potential is not fully realised, the dialogue is wordy, the staging too static, the pace slow and the acting frustratingly uneven.

Summers captures some of the vulnerability and resentment of Johnny, as he struggles to overcome his nerves and confront the prejudices of the new comics who treat him as a nobody, and the old guard who consider him a pariah.

Jeremy Kewley is puppyish and hilariously annoying as Graham, a doctor who thinks he is funny and, being the only non-comedian back stage, ironically gets the biggest laughs.

Although it craves some script editing and tightening of the performances, Death of a Comedian is a diverting glance into the secret lives of comics.

Posted by Kate Herbert at 13:53 No comments:

The play begins with satirical backroom scenes between a make-up artist (Anna Samson) and a sozzled talk show guest who we later discover is the dead Judy Garland played with wry, jaded elegance by Belinda McClory.

Scenes and characters bleed together as the make-up room slips into a T.V. studio, a soap opera rehearsal, a film set, an L.A. apartment and, finally, a car crash site.

Movie directors, stage hands, actors, medics all blur into each other as we try to make sense of this bleak, angry, confused, sometimes annoyingly abstracted world.

From the clues in the dialogue and action, we determine that someone, clearly a man, is injured. It is also obvious from all the clues that this injured person is a former child star.

Then finally, in one long, slow, silent and agonising scene, a battered car crouches in the centre of a huge, open space as police forensic officers and medics collect evidence at the accident site.
Read more »
Posted by Kate Herbert at 10:16 No comments:

The capable cast, directed by Pip Mushin and accompanied by Peter Sullivan on piano, work like Trojans to make the flimsy narrative, two-dimensional characters, flabby dialogue and cheesy songs entertaining.

However, Howson’s script lacks dramatic development, there is no dramatic or character conflict, and the gags are wordy, predictable and often unfunny.

Mark Mitchell is the comic highlight as Mac, the retired mechanic who loves a beer, and he gets the biggest laughs for his physical, visual gags: sliding awkwardly off the couch while pedalling his foot exerciser and wrestling hilariously with his oversized, red pants.

Mac’s craving for his youthful sex drive features in his two songs: The House Where I Get None and Take Viagra.
Read more »
Posted by Kate Herbert at 12:16 No comments: