This show looks like a riot.
Opens Jan 9.
Puppets with attitude. This is a puppet version of The Golden Girls. Part of Midsumma.
Apologies. I did not see this show to review it. KH

Posted by Kate Herbert at 18:28 No comments: 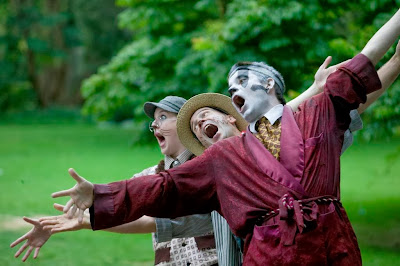 Slap on a hat and some sunscreen, pack a picnic and pile the littlies into the SUV for a peppy family outing to The Wind In the Willows amidst the lusciously cool greenery of the Botanic Gardens.

The children adore the gentle, playful participation that invites them to waggle their ears, wiggle their noses, sing along with “Quack Quack Quackady Quack”, and go on a dangerous mission into the Wild Wood to rescue little otter, Portly (Tamalyn Davies).

Roscoe Mathers is an institution after 21 years as Head Chief Rabbit, and he never fails to entertain kids and parents with his cheerful banter, perky songs, and cheeky nicking of picnic food.

The Weasel is Rabbit’s nemesis and Jim Dunlop plays him with a sleazy cunning that makes this sneaky Weasel the villain that the kids love to hate.

Andrew Dunne, even after 200 performances in the role, plays with relish the egotistical, toffy-nosed twit, Mr. Toad, and Nicholas Dubberley is suitably patriarchal as gruff but wise old Badger.

Jack Beeby is charmingly boyish as Ratty who introduces shy, little Mole (Andi Snelling) to life by the Big River, and Nicholas Renfree-Marks, as practical joker, Otter, deserves a special mention for his resonant, operatic singing.

There are plenty of witty contemporary allusions and groan-worthy puns for the adults, including references to Bunny’s Warehouse, Mylie Cyprus, Justin Beaver, Ron Weaselly, Harry Otter and Frogwarts’ School.

The comical insults fly when Toad is arrested for dangerous driving then is sentenced to 19 years of hard labour after calling the copper “a fat-faced goon” and the Judge “a cloth-eared, old goat”.

In the finale, children and parents delight in cheering and booing as the invading Weasels fire water pistols at the friends, attempt to cook Mr. Toad for dinner and are finally tossed out of Toad Hall on their weaselly ears.

This show never ceases to entertain young families so get down to the Gardens and enjoy year 27 of The Wind In the Willows. 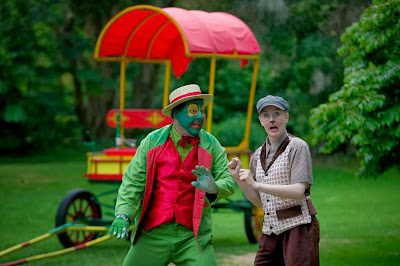 Article also published in Herald Sun online on Dec 23 2013 and thereafter in print. KH
Camille O'Sullivan in The Rape of Lucrece
A SLEW of polished local productions set the bar high on stage this year, but it was the top international imports that took out all of this year's five-star ratings.

Home grown work earned an unusually high number of four and 4½ stars reviews, though only one of the shows that I awarded five stars was an Australian production - of an American musical.

2.     Never work with animals goes the old adage, but the Canadian production, Cavalia, was an exuberant, elegant, thrilling celebration of the beauty and muscularity of horses and humans.

3.     We were privileged to witness the faultless performances of Hollywood royalty in Driving Miss Daisy, with Angela Lansbury as the cantankerous Daisy and James Earl Jones as her jovial, dignified and velvet-voiced chauffeur.

4.     The return of Jersey Boys was heart stopping, with its rags to riches story, witty script, unforgettable songs and spine-tingling, four-part harmonies. Of course, only the production and most of the cast were Australian.

5.     Another return season and the highlight of Theatre Works’ year, was No Child, a US show featuring the phenomenal theatrical skills of Nilaja Sun, who left audiences gob-smacked by her portrayal of an entire class of troubled New York teenagers and all their teachers.

6.     I need to sneak in a 6th 5 star show, the inspired Arena production of Jesus Christ Superstar that catapulted Lloyd Webber’s 70s rock opera into the 21st century with the urgency of a youthful, political revolution complete with tweets, graffiti and a chorus of dread-locked ferals as Jesus' followers.

Beaten by a nose – or half a star – were a handful of shows on 4½, including two smart, Australian political comedy shows: Rod Quantock’s First Man Standing and Charlie Pickering and Waleed Aly’s The World’s Problems Solved.

The inimitable Caroline O’Connor sparkled in Gypsy (The Production Company), Bert LaBonté was a passionate Martin Luther King in The Mountaintop (MTC), and Kate Kendall deserves another season of The Lover.

The gargantuan creature in King Kong warranted 5 stars for its masterly design and manipulation, expressive face and imposing physicality, but the unmemorable music and overwrought production style let Kong down.

While the MTC had some successes, our other major company, the Malthouse had a decidedly lacklustre year.

More power to the local product in 2014. 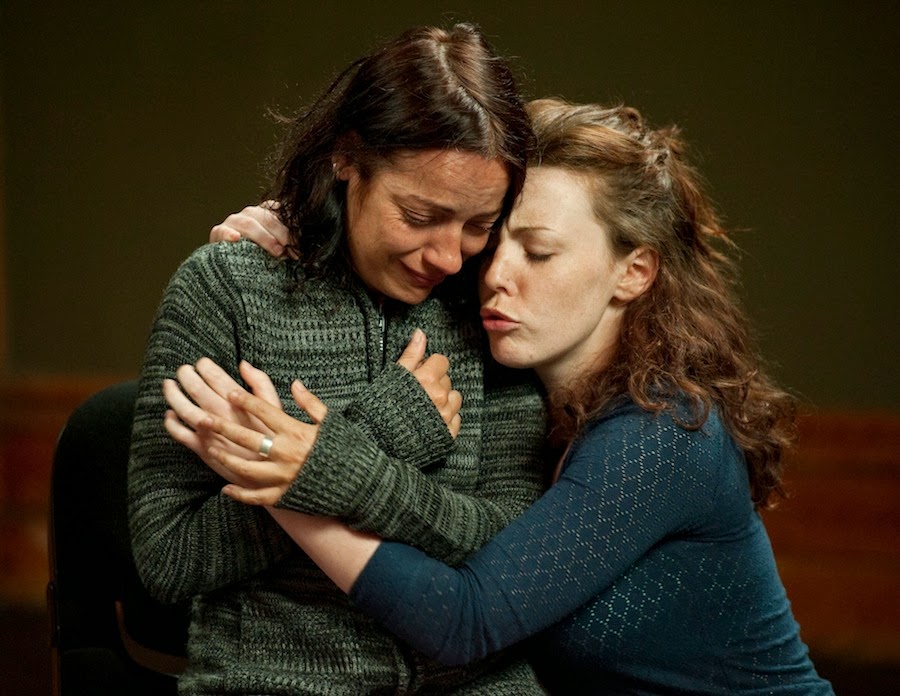 Uncle Vanya is a snapshot of a family in crisis on their estate in rural Russia; when the lazy, self-indulgent Professor (Scott Gooding) visits with his beautiful, young wife, Yelena (Zoe Stark), everyone fawns on them and the family estate falls into disorder and slothfulness.

The actors start off playing broad angst, move to rough clowning and bad mime, then to shouting and, finally, to overplayed despair.

Much of the casting is inappropriate, with a youthful Stephanie Osztreicher playing the ancient Nanny, and Ruth Sancho Huerga, a capable actor in her native language, being incomprehensible as Sonya with a thick, Spanish accent.

Joseph Sherman lacks nuance as the lovelorn Vanya, playing him as a whining child with a fixed grimace, a distant gaze and no balance of the tragedy and comedy inherent in the character.

Stark lacks the subtlety, grace and elegance of Yelena, playing her on one note, while Gooding works hard to make the Professor entertaining.

However, the strongest performance is from Eric Myles who makes the old duffer, Waffles, the only credible and diverting character, while Chris Bolton’s charming, off-stage, live music should be featured on stage.

There is certainly an attempt to capture the comedy that is embedded in Chekhov’s drama, but it is clumsily wrought and Leslie Simpson, using some overwrought mime, turns the dignified but despairing Dr. Astrov into a ridiculous caricature of a drunk.

The simple set of black boxes is littered with giant Lego pieces that, initially, promised to be a metaphor about the characters’ childishness but, when the actors started chewing and sucking on them as food and drink, it became absurd.

Being a fan of Chekhov, I wanted to like this production, but it left me irritated and sent my overseas guest running from the theatre at interval. 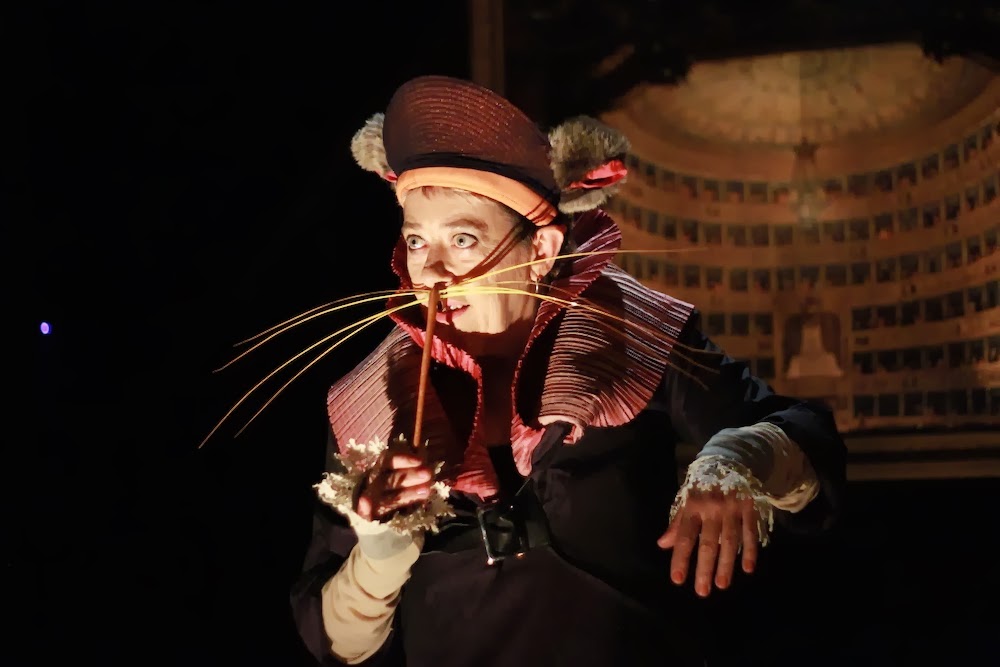 Margaret Cameron’s performance work is the epitome of eccentricity and defies description – but here goes!

Josefine’s shattered persona is both tragic and comical, and her pale tears, absurd distraction and inspired poetic musings are often undercut by puns, wry glances or squeaks as she squeezes little squeakers hidden in her sleeves.

She hides away from artistry and artistes, exploring the meaning of art and language, searching for “the audible fruit of meaning” as she nibble on a tart lemon.

Cameron’s every action as Josefine is compelling and unexpected: she playfully taps her toe on a bell to provide a “footnote”, picks out a tune on a tiny grand piano, hauls on a huge bell-pull that emits a lion’s roar, or parades like a queen around the confining circle of her Edwardian salon.

But it is Cameron’s expressive, clown-like face and distinctive vocal quality that make her performance indelible, even if you miss the subtle permutations of language and meaning.

She exudes the poignant grief of a demented, wild-eyed soul, with a despairing glint of grief in her watery eyes, and her rich, resonant, velvet tones are counterpointed by bright, piping, mouse-like notes as she twitters, “Pipe!”

Rather than being a linear narrative, her text is an elaborate collision of ideas and images drawn from diverse sources and performed with lyrical, fluid language that organically shift the location, content and meaning.

This idiosyncratic performance by the consummate artist, Cameron, may have greater appeal for connoisseurs of contemporary theatrical performance, but it is a delicacy that can be savoured by all. 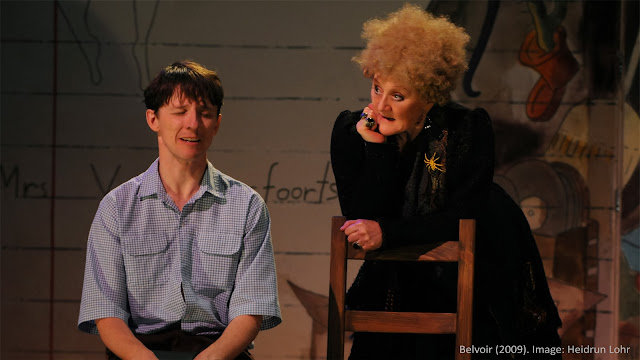 The Book Of Everything is a challenging and entertaining family show that balances light and darkness, choosing not to underestimate children’s capacity to cope with tough issues such as fear, violence and bullying.

Eccentric nine-year old, Thomas Klopper (Matthew Whittet), deals with his fear of family violence by escaping into a private, fantastical world that he records in his Book of Everything.

Thomas lives in 1951 post-war Amsterdam where, to combat his isolation, he conjures his own magical world in which he sees tropical fish in the Dutch canals, a frog plague in his street, and even chats with Jesus who is vague but friendly.

Thomas’s emotive story of facing his fears, confronting bullies with a wall of happiness and never surrendering, echoes the Dutch Resistance to Nazi Occupation that is remembered by his parents (Peter Carroll, Claire Jones), sister (Alison Bell) and neighbour (Julie Forsyth).

Thomas is an odd kind of anti-hero, who wishes biblical plagues upon his violent father to protect his vulnerable mother, then, in a poignant moment, defies his father by asserting that his single ambition is to be happy when he grows up.

He breaks the ‘fourth wall’ by having Thomas and other actors directly address the audience, delivering narration and characters’ personal observations.

Armfield’s ensemble production displays the mechanics of theatre, with actors perching on stools when not in scenes, providing sound effects, and changing scenes by moving the pages of the enormous picture book (Kim Carpenter) that replicates Thomas’s Book of Everything.

Whittet is playfully awkward and introverted as Thomas, embodying the geeky outsider who seeks solace in his imagination, and friendship in a disabled teenage girl (Andrea Demetriades) and the quirky, old neighbour (Forsyth).

Carroll is compelling and brittle as Thomas’s severe and self-righteous father, a misguided religious fanatic and control freak who feels justified in hitting his mild-mannered wife and son when he cannot control them.

Genevieve Picot is feisty as rebellious Aunt Pie, John Leary is cheerfully casual as Jesus, and Claire Jones is gentle and resilient as Thomas’s long-suffering mother.

This play provides no trite solutions to social or family problems but is simultaneously confronting and funny – but maybe it is best suited to kids over 8 or 9. 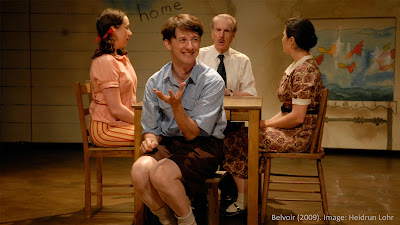