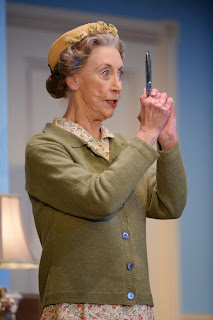 IF YOU love an Agatha Christie murder mystery, this stage adaptation of A Murder Is Announced, her fourth Miss Marple novel, will be just your cup of tea - or cup of poison.

This Australian production has all the crucial Christie elements: an isolated country house, a parade of quirky or pretty suspects, a couple of bloodless murders, oodles of red herrings, a brusque detective, and the inimitable Miss Marple: elderly village spinster and amateur sleuth.

Miss Marple is fortuitously visiting the village of Chipping Cleghorn for her rheumatism treatment when a disturbing notice appears in the local rag: "A murder is announced and will take place on Friday, October 29th, at Little Paddocks at 6.30pm."

By another marvellous stroke of luck, sweet old Miss Marple is acquainted with Letitia Blacklock (Debra Lawrance), owner of Little Paddocks, so she pops in for a cuppa just around the time of the murder. Yes, there's a murder at 6.30pm.

This Miss Marple is not as fey and distracted as she is often portrayed; she does less knitting and does not indulge her habit of judging criminal behaviour by comparison with naughty characters in her own village of St Mary Mead.

Lawrance's Letitia is the epitome of stately gentlewoman, Deidre Rubenstein's Dora Bunner is enjoyably batty and mercurial, while Victoria Haralabidou is hilariously bouncy and bonkers as Mitzy, the Hungarian maid with a persecution complex.

Robert Grubb is likeable as the brusque, business-like Inspector Craddock, Carmen Duncan is suitably dim and decorative as Mrs Swettenham, and the remaining cast play appropriately pretty young things who are all suspects for various reasons.

A Murder Is Announced is light-hearted fun that will appeal to Christie fans and those who like a good yarn rather than an avant-garde, theatrical assault on the senses.

Posted by Kate Herbert at 17:24 No comments:

Although the style and form of Minsk 2011 Belarus Free Theatre is old-fashioned, episodic, political theatre that harks back to the 70s and 80s, it has something compelling to say.

In this insane despotism, citizens of Minsk are arrested, abducted or beaten on the street – by police or skinheads – for attending peaceful gatherings, gay pride marches or simply meeting in groups of more than three persons.

The performance depicts individuals attempting to speak into a microphone then retreating in silent fear, only to be abducted by skinheads while old women quietly sweep away any evidence. 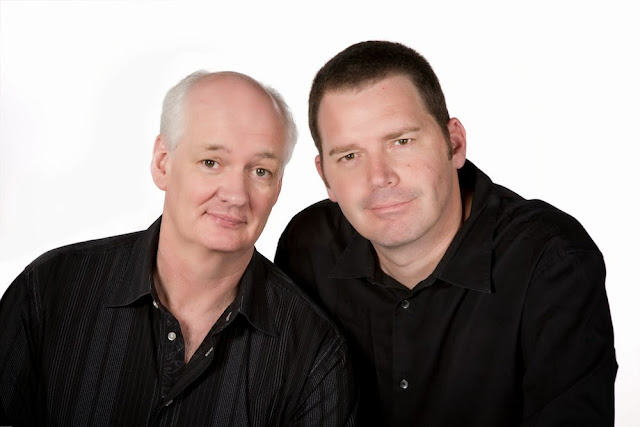 If you are a late adopter of the US TV comedy show, Whose Line Is It Anyway, you’ll know Colin and Brad and the improvisational games that are the basis of their chaotic and hilarious stage show. You’ll recognise a lot of stuff if you’ve ever seen Theatresports on stage – or done a beginner’s drama class.

It is delicious to witness two razor-sharp minds whirring as they conjure characters, stories, dialogue and gags from thin air. This may look like goofing around, but Colin and Brad’s skill and spontaneity are exceptional.

Every show is totally different and Colin and Brad – who are dead charming and totally engaging – don’t know what the content will be, even if though know which formats/games they will use.

As Colin says at the start, “Let’s make some crap up!”


You need to be prepared for, or to love theatre that is arduous, formalistic and repetitive to make it through Episode 1 of Life and Times by Nature Theater of Oklahoma, let alone all four episodes over 10 hours.


During All That Is Wrong, Anna Jakoba Ryckewaert confronts a litany of uncontrollable, incomprehensible problems that surround her: war, hunger, capitalism, fear, religion, sex, environment, and more.

If we allowed every awful event in the world to penetrate our skin, the existential pain could be brutal and overwhelming – but 18-year old writer-performer, Ryckewaert (AKA Koba), pursues such discomfort during her performance.

The production highlights the internal, psychological struggle of one young woman facing adulthood with trepidation, trying to understand her place in the world and what she believes or values.

Armed with only white chalk, she fills an expanse of blackboards on the floor with agitated, urgent scribblings, creating a chilling mind-map of words, ideas and obsessions that fan out from the central word, “I”.

Although she speaks little, she reveals to us a visual version of her identity, her relationship to her immediate environment and the wider world, and her youthful search for meaning and understanding.

“I think too much – I don’t sleep well – Skinny – Not anorexic”, she scrawls in shorthand about herself.

Michael Kantor’s reimagining of King Lear depicts a bloody battle for mining royalties and power, and a violent collision of wills in an indigenous community.


The translocation of Shakespeare’s wrenching tragedy from an ancient, white man’s world to a remote desert setting gives new resonance to the story of Lear (Tom E. Lewis), an aboriginal elder, who hands over all his land rights, property, power and wealth to two greedy, cruel daughters but disinherits his youngest and most loyal. 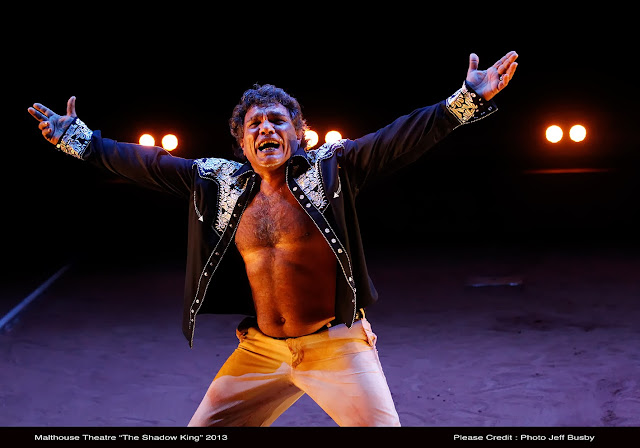 Lewis translates Lear into an old man who trusts the old ways and mistakenly believes that his older daughters value him more than they do his wealth. This error of judgment leaves him and his mob (the band) homeless, penniless, disillusioned and finally delusional as he roams the desert with his Fool (Kamahl Djordon King).

Lewis finds some poignant moments, particularly in Lear’s reunion with his exiled Cordelia and as he grieves over her body in the final scene. Perhaps his most moving moments is in a silent filmed scene where his distraught face and naked chest simply portray Lear’s vulnerability and grief.


The dialogue merges English, indigenous language and creole with snatches of Shakespeare’s Elizabethan text to create a rich vocal landscape that makes the indigenous characters vivid.

The Arnhem Land locale is captured in projections of hot, red desert sunsets and colorful footage of remote communities, houses and roving dogs.

Directed by Alexander Devriendt, it is the second of a trilogy by Belgian company Ontroerend Goed, and the title of the first play points to this show’s content – “Once and for all we’re gonna tell you who we are so shut up and listen”.

Eight tearaways shut themselves inside a small, grungy cell (or huge cupboard?) where they indulge their obsessive self-absorption by filming the ultimate Youtube-style “selfie” that is projected onto the outer wall for us to witness.

If your teenagers’ behaviour and secrets scare you, this show will send you screaming to the doors because they do all the irksome, dissolute, dangerous things that we suspect adolescents get up to in the absence of adults. 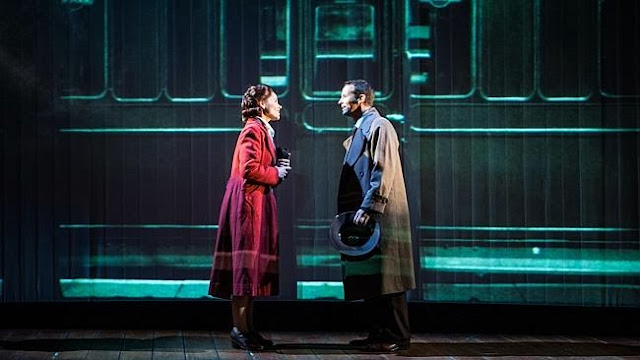 
Fans of Noël Coward’s Brief Encounter, a romantic movie about an illicit affair, may think this stage version dilutes the poignant drama with too much playful comedy – but it is hearty entertainment.

Alec and Laura are both married with families, but their first, chance encounter in a railway station cafe during 1938 leads to weekly meetings and then to a burgeoning, passionate, but impossible love.

Nightingale and Sturgeon replicate the studied, elevated acting style, refined vowels, romantic dialogue and very English social reserve of Trevor Howard and Celia Johnston in the film, as they step warily around each other until they are helplessly in love.

Rice’s production cunningly creates the illusion of Laura and Alec crossing from stage into film when they step through the projection screen to magically appear inside the on-screen train (film design: Jon Driscoll, Gemma Carrington). 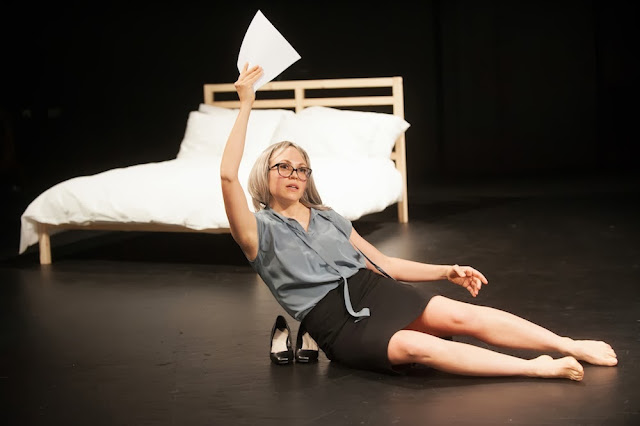 
I’m always a little bit excited before a Nicola Gunn performance because she invariably surprises and entertains me.

If you think artists are self-indulgent idiots justifying incomprehensible work with impenetrable psycho-babble you’ll love In Spite of Myself, in which Gunn satirises performance art in irreverent, funny, eccentric and unexpected ways.

With her brazen parody, Gunn takes the mickey out of art, ironically making the inaccessible more accessible – and funny.

After giggling at her living sculpture installation in the foyer, we enter the theatre where Gunn launches into her acerbic satire, “Exercises in Hopelessness – Nicola Gunn (1979 to present)”, a fictional retrospective about fictional art work created by her fictional self.

Dressed with absurdly elegant formality and wearing a silver-grey wig at a perilous angle, Gunn introduces the exhibition/lecture as Susan Becker, the absurd epitome of gallery curator/bureaucrat who doesn’t quite understand her subject.