Michael Kantor’s reimagining of King Lear depicts a bloody battle for mining royalties and power, and a violent collision of wills in an indigenous community.


The translocation of Shakespeare’s wrenching tragedy from an ancient, white man’s world to a remote desert setting gives new resonance to the story of Lear (Tom E. Lewis), an aboriginal elder, who hands over all his land rights, property, power and wealth to two greedy, cruel daughters but disinherits his youngest and most loyal. 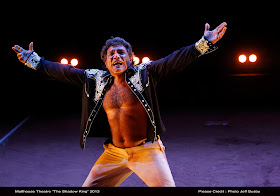 Lewis translates Lear into an old man who trusts the old ways and mistakenly believes that his older daughters value him more than they do his wealth. This error of judgment leaves him and his mob (the band) homeless, penniless, disillusioned and finally delusional as he roams the desert with his Fool (Kamahl Djordon King).

Lewis finds some poignant moments, particularly in Lear’s reunion with his exiled Cordelia and as he grieves over her body in the final scene. Perhaps his most moving moments is in a silent filmed scene where his distraught face and naked chest simply portray Lear’s vulnerability and grief.


The dialogue merges English, indigenous language and creole with snatches of Shakespeare’s Elizabethan text to create a rich vocal landscape that makes the indigenous characters vivid.

The Arnhem Land locale is captured in projections of hot, red desert sunsets and colorful footage of remote communities, houses and roving dogs.

Frances Djulibing gives an authentic and touching performance as Edmund’s much-abused mother, and her blinding at the hands of Lear’s two daughters followed by her reunion with her disguised son, Edgar in the desert, and her attempted suicide are rich moments.

Jada Alberts and Natasha Wanganeen are suitably heartless and selfish as Goneril and Regan and Rarriwuy Hick is as sweetly naive Cordelia. Kamahl Djordon King is engaging as Lear’s adviser, the Fool, and Damion Hunter is a callow, youthful Edgar.

Music underscores the story but the strongest sound is the unaccompanied, amplified voice chanting in pain as Lear’s mind disintegrates and Djulibing’s solo lament as she faces death.

The production has some interesting elements that illuminate the tragic journey of a deluded old man from ignorance to wisdom, a dysfunctional community that has lost its way, and its relationship to country when it is infected with white man’s greed.

However, the tragedy is not fully realised in the production and the trajectory of old Lear’s mental downfall is not sufficiently emotionally connected to make him the centre of this modern, indigenous tale of woe. 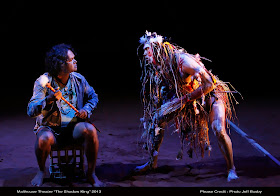 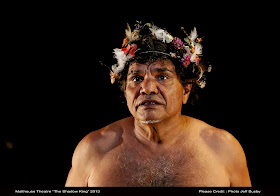