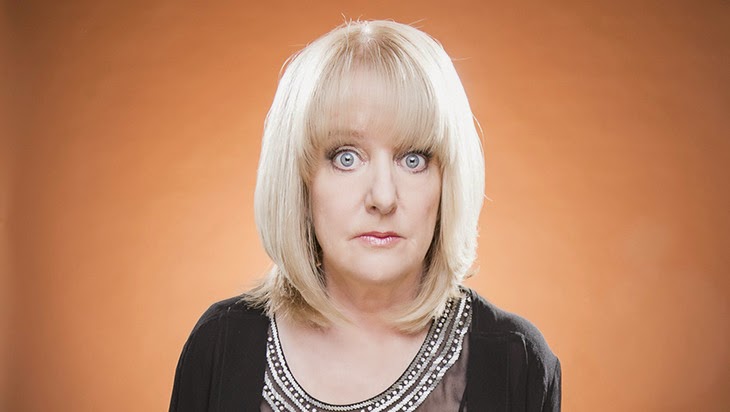 She is absolutely unembarrassable (Well, it’s a real word now!) so she can talk with alacrity about her dodgy, heart-shaped uterus, her bosom squashed into a too-tight evening gown, or her failed gig at Parramatta decades ago.

With just a crooked smile or a mischievous grin, she unashamedly admits to boozing and smoking while breast-feeding or secretly resenting her partner not pursuing his career as a doctor – correction – a rich doctor.

She mines her dysfunctional parenting style for jokes that allow her to embarrass her children, firstly as bright-eyed tiny tots, then disdainful teens and finally as successful adults. 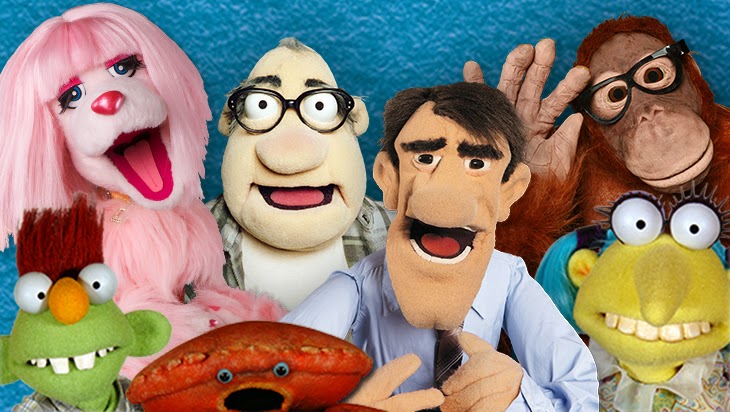 Think of The Muppet Show and Whose Line Is It Anyway? colliding with an X Rated movie in an enormous accident of improvisational comic puppetry and you have Puppet Up! UnCensored.

These provocative, Henson puppets get away with murder – or, rather, with lurid language, sexual innuendo, graphic action and swearing to make Kermit blush.

The 60+ puppets include aliens, animals, humans, plants, sea creatures and a horde of hotdogs on sticks.

Six dexterous, hilarious puppeteers not only animate these creatures but also improvise stories, characters and songs.

We see onscreen puppet action while simultaneously watching the puppeteers below with hands held high, manipulating their creatures to create the onscreen illusion. 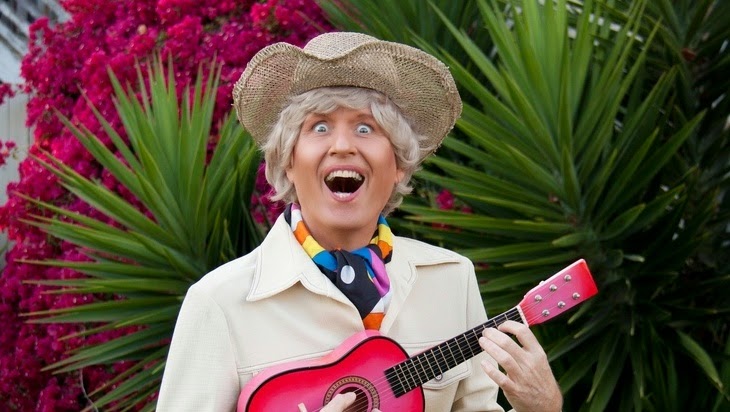 He’s tightening up his limp wrist, ditching songs that smack of gayness (anything by Elton John and I Am What I Am from La Cage aux Folles), and replacing them with butch numbers such as Wanna Be In My Gang with Skinhead dancing.

He can’t sing Me And Alan Jones anymore, because he is now a committed, metrosexual bloke who goes to a men’s group run by Frankston politician, Geoff Shaw, retrieves repressed straight memories, and pervs at an over-sized poster of a girl’s bottom.

Fortunately, this new, ‘straight’ Bob is not averse to singing a medley or three and, accompanied by his super-tight, three-piece band (John Thorn, Sam Lesky, Holly Thomas), to match his three-piece, white safari suit, he delivers a hot, top 40 list of tunes. 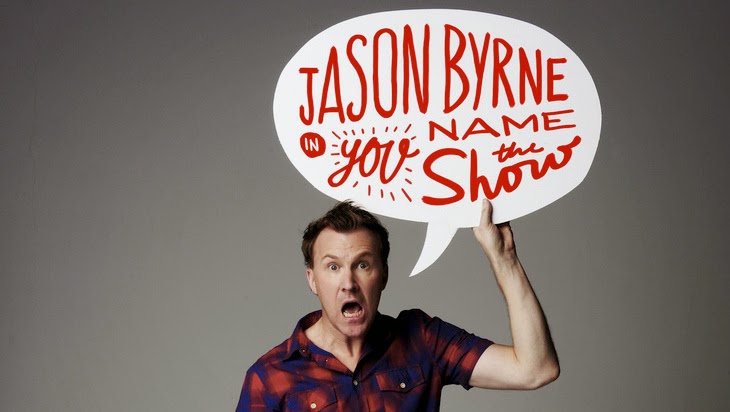 His improvised work with the crowd provides the funniest material as he teases the caravan-builder and his tiny girlfriend, the teens who can’t survive an hour without their phones, and the video gamers who shout out “Head Shot” which has Byrne scanning for a sniper. 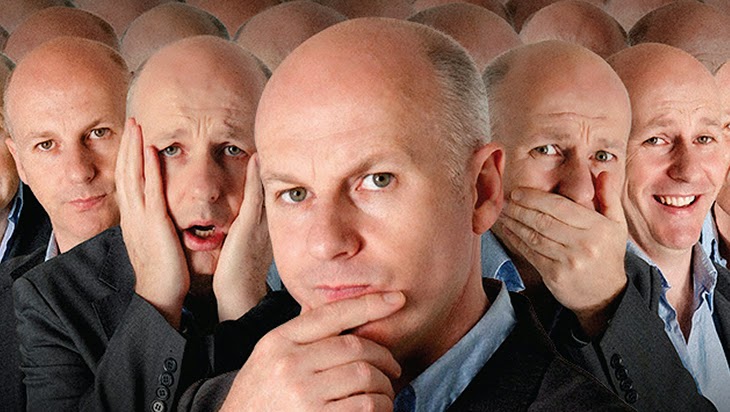 Paul McCarthy is a consummate impersonator and character comedian who is better recognised as his subjects than as himself.

When total strangers call him “Kochy” in the street, is it any wonder he’s talking about an identity crisis?

In this solo show, Identity Crisis, McCarthy courageously steps away from the protection of his characters most of the time and back into his own skin to explore his youthful identity crisis and his eccentric mother’s role in it.

But the most compelling story is McCarthy’s shocking revelation of her adultery with – well – an unexpected man – and this story is so gob-smacking that it deserves more time. 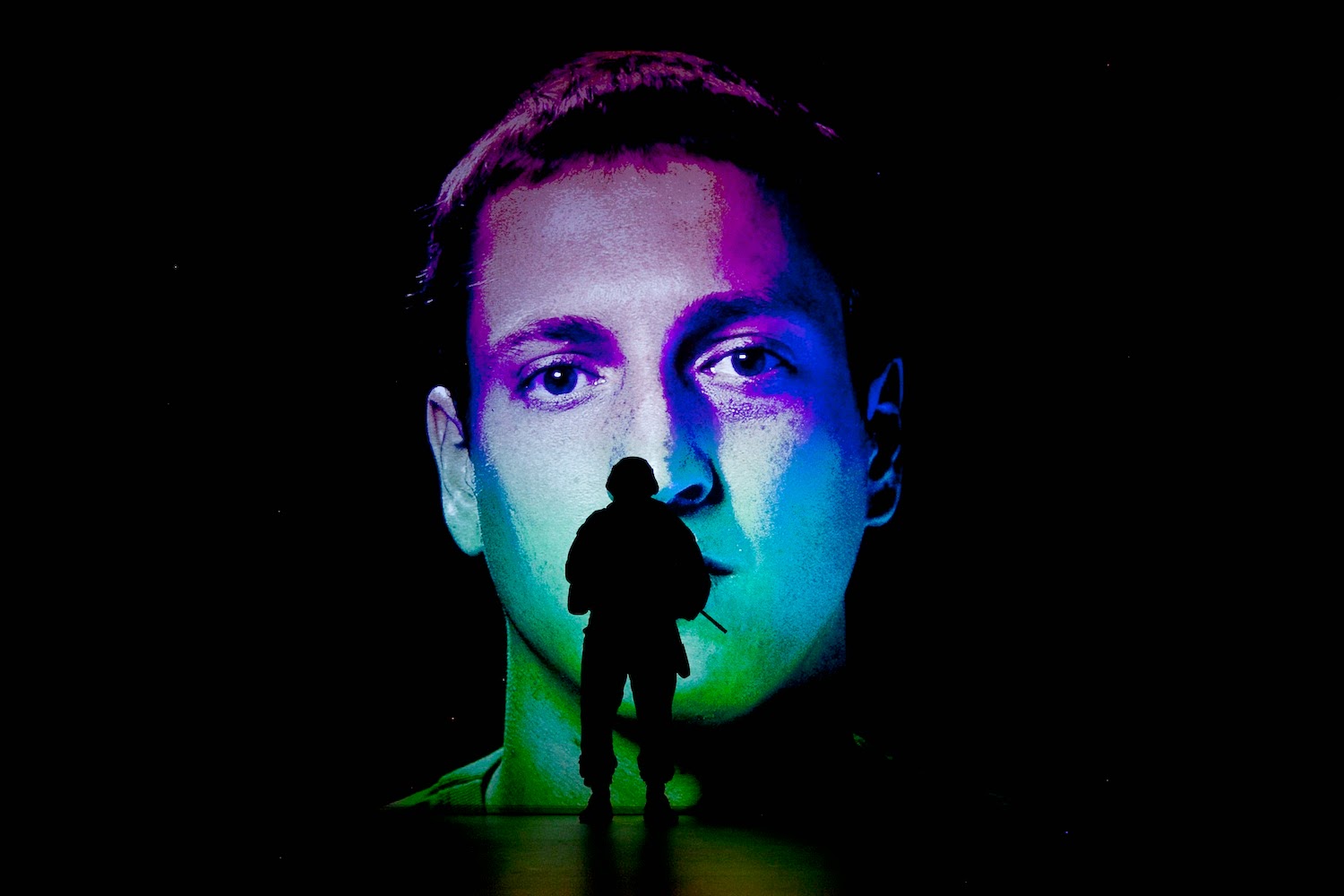 In The Long Way Home, the true stories of injured Australian servicemen and women merge with Daniel Keene’s incisive writing to create a moving and gritty play.

Real stories told by real people have a resonance and truth that actors can only dream of, and seeing 12 service personnel performing their own and others’ painful stories is compelling, provocative, sometimes funny and often heart-rending.

Supported by 5 professional actors, the 12 service persons play a parade of characters based loosely on themselves and others, tell stories about the aftermath of war, the aching experience of recovering from injury and facing ongoing physical, emotional and psychological trauma.

Director Stephen Rayne, based this show on his UK production and, with Keene as writer, they ran a five week workshop with a group of participants, exploring ideas and experiences, and developing acting skills which led to Keene’s script and a period of rehearsal. 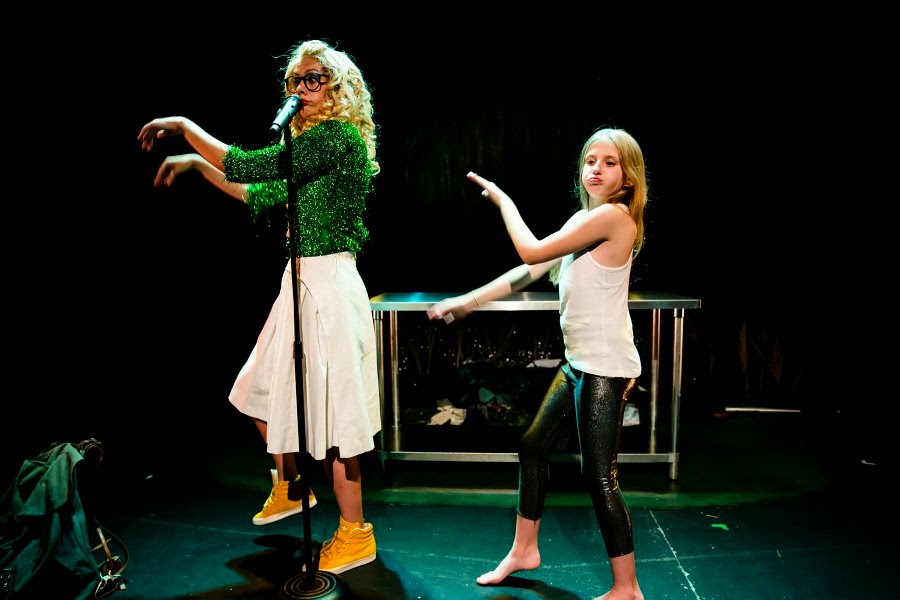 
If you are alarmed about your 9 year-old daughter’s choice of role models and the rampant sexualisation of children, do not despair – Catherine Bennett is here.

Just like the title of Bryony Kimmings’ show, Catherine is a Credible Likeable Superstar Role Model, but she is a fictional character, created by Kimmings with her 9 year-old niece, Taylor Houchen.

UK performer, Kimmings devised this performance with Taylor in an attempt to determine what makes “tweenies” (7 to 12 year old girls) tick, what preoccupies and fascinates them and who their role models are.

The show flips between deliciously charming and fiercely confronting as we watch the pair dance with joy and abandon to Jessie J, enact fantasy stories, become knights-errant to fight invisible enemies and share secrets about each other with the audience.

I did not see this show but here are some pics. KH 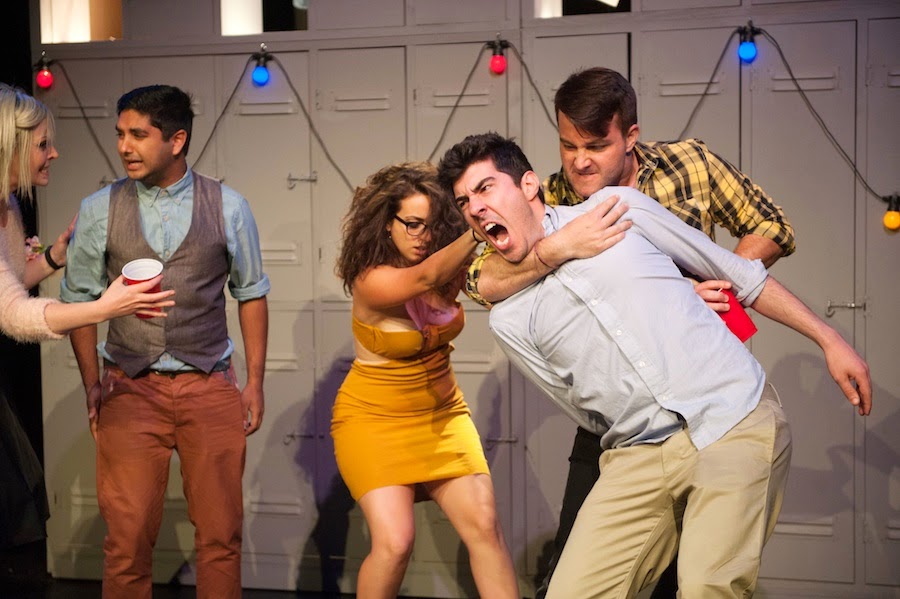 Posted by Kate Herbert at 10:29 No comments: 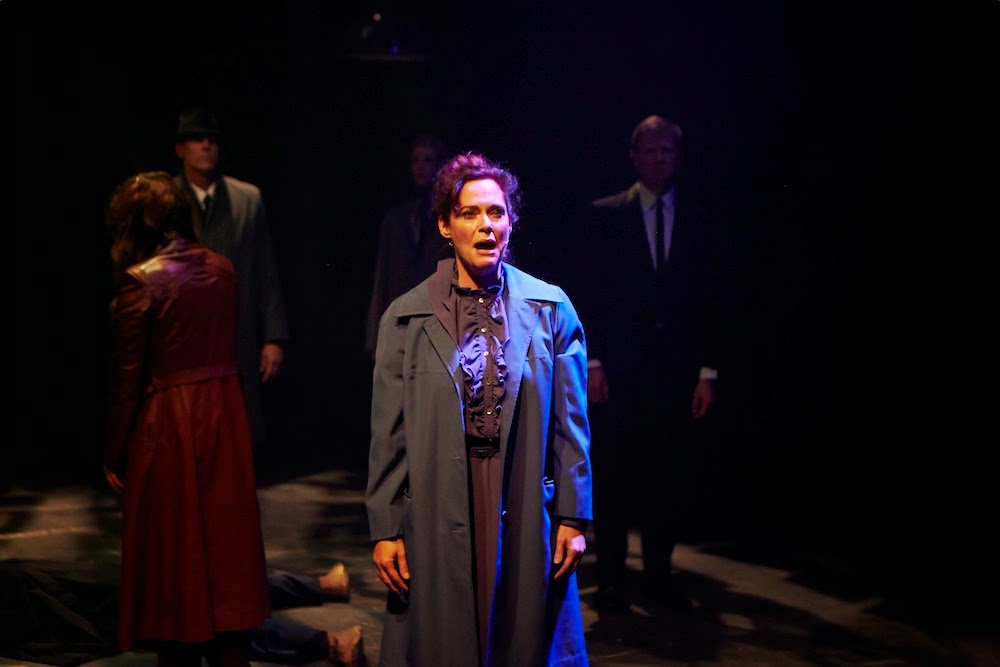 
Blood Brothers, Willy Russell’s 1983 comic-tragic musical about twin boys separated at birth, is a scathing social commentary on the British class structure and nature versus nurture.

The musical elements are enormously successful in this production, not only because of Russell’s memorable tunes and gritty, witty lyrics, but also because of the accomplished three-piece band and assured musical direction of Andrew Patterson.

In the slums of Liverpool in 1958, Mrs. Johnstone (Chelsea Plumley) discovers that she is expecting twins after being abandoned with seven kids by her husband.

Her fatal error is to give one twin to her childless employer, Mrs. Lyons (Glenda Linscott), who is desperate for a baby, but superstition dictates that the boys must never know that they are brothers or they will die.

This combination of primitive superstitions and Mrs. Johnstone’s Faustian bargain with the devil sets in motion events that ultimately end in tragedy. 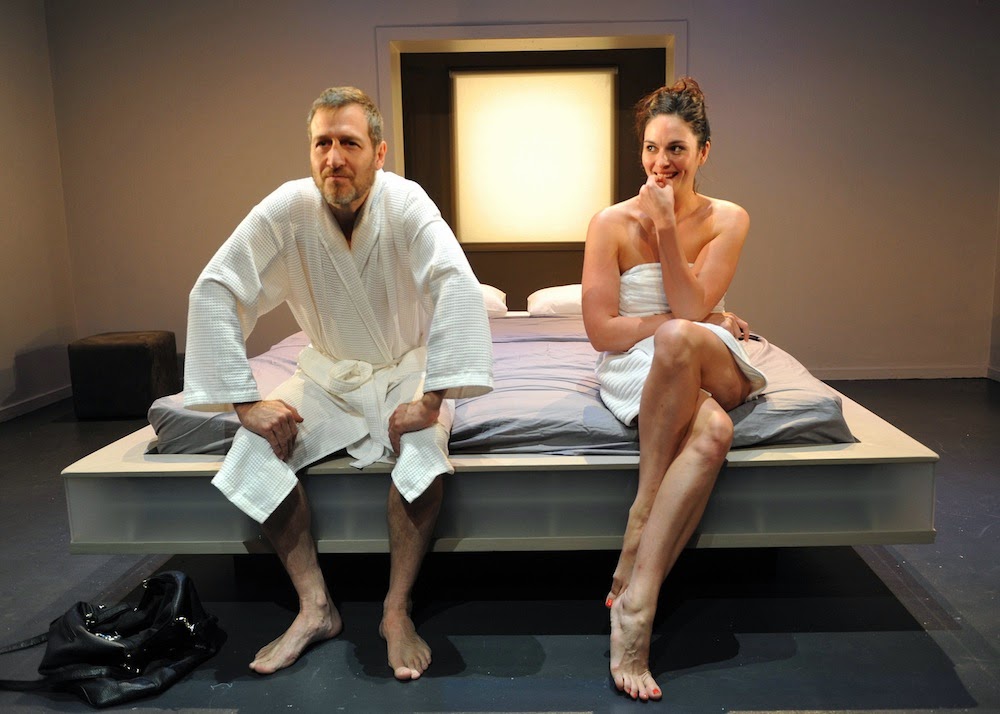 
The early scenes of This Year’s Ashes, Jane Bodie’s play about a woman’s self-destructive response to grief, showcase both Bodie’s crackling dialogue and an impressive cast.

Despite Bodie’s witty writing and well-observed characters, the second half of the play, directed by Tim Roseman, is less successful because it becomes repetitive and has several false endings.

Ellen (Rosie Lockhart) is 30-something, lives in inner-Sydney surviving on vodka and frequent, anonymous, sexual encounters with men.

When her father (Jeremy Stanford) arrives unannounced after an unexplained, two-year absence, Rosie absents herself from her marketing job to watch The Ashes with her beloved dad – in the discomfort of her chaotic studio flat.

Lockhart balances vulnerability and toughness as Ellen, shifting from drunken harridan to demanding child as she negotiates the unpredictable terrain of her relationships with her father and the men she seduces in the over-sized bed that dominates the stage.

The entire cast delivers Bodie’s whip-sharp dialogue with commendable comic timing, but Daniel Frederiksen relishes playing Ellen’s assorted lovers and is hilariously goofy as warm-hearted, hopeful Tom who is determined to coax Ellen back into the world. 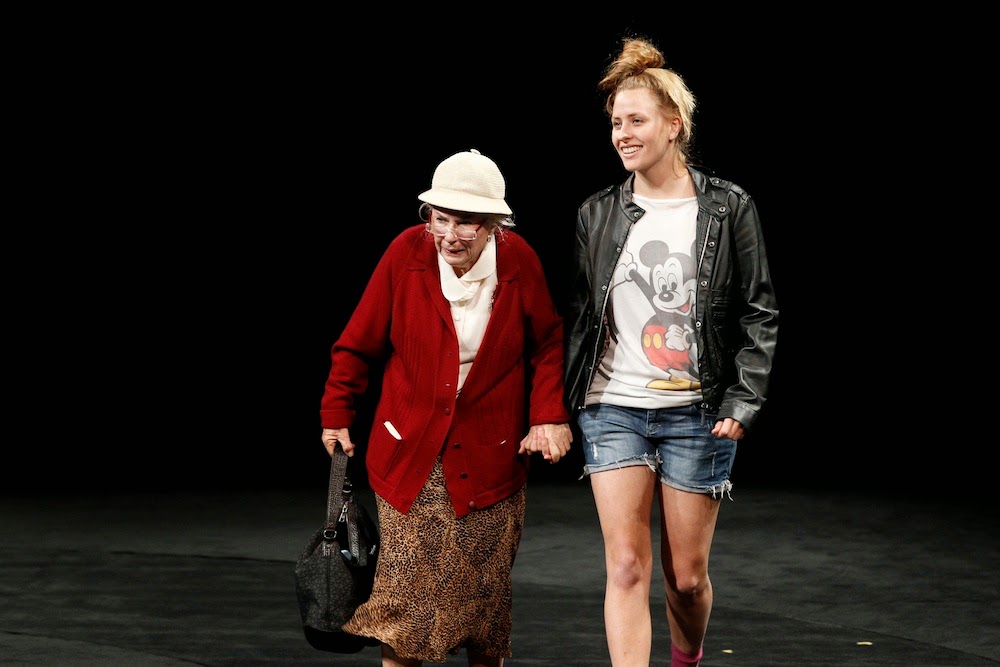 The play, directed by Simon Stone, is a tale of an unlikely relationship between two women from different generations and vastly dissimilar life experiences.

Catherine (Megan Holloway), an aimless, young, unemployed actor, is befriended over the rubbish bins by her eccentric, old neighbour, Ana, and then becomes dependent on Ana’s bizarre wisdom and enamoured of her life stories.

Although there is dramatic potential in the women’s relationship, the play lacks cohesion because its two narrative threads – Ana’s past and Catherine’s 21st century dilemmas – are not effectively dovetailed.

The primary thread of the play, and its most successful scenes and dialogue, are built around Ana’s stories of love, war, refugee camps, and her life in Hungary, all of which Nevin tells in hilariously broken English interrupted by insults and unsolicited advice.

Ana is maddening, perverse, rude, generous, paranoid and old as dirt, and Nevin fully inhabits her, creating a complex, credible character that makes one want to slap her – or hug her.

Fortyfivedownstairs
March 13 to 23, 2014
I am not reviewing or seeing this show but I love this team so here is some info. KH

From Media release:
"The Long Pigs is a profound, stylistically and visually arresting performance rooted in physical and black comedy devised and performed by renowned and leading Australian theatre artists: Clare Bartholomew, Derek Ives and Nicci Wilks and directed by Susie Dee." 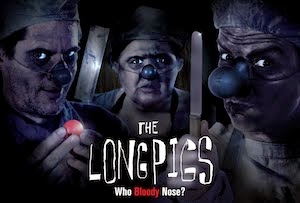 Posted by Kate Herbert at 15:54 No comments:

From March 11, 2014
I am not seeing or reviewing this show but here is some info. KH 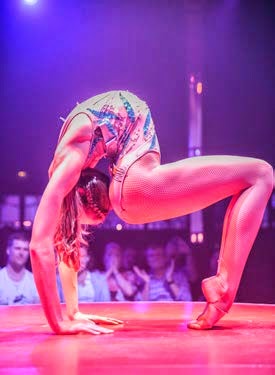 From Media Release:
Since EMPIRE was last in Melbourne, several new artists have joined the cast. Contortionist Lucia
Carbines has taken over the role of Miss A in a Bubble, performing the iconic aerial sphere act as well
as a brand new, specially-created contortion act. Growing up in Queensland, Carbines is the only
Australian performer in the international cast. American singer Victoria Matlock has taken over the
role of Miss Purple, while Ukrainians Vlad Ivashkin and Aiusha Khadzh Khamed are now
performing the beautiful hand-to-hand adagio act in their roles as Carrot Man and Lime Green Lady. 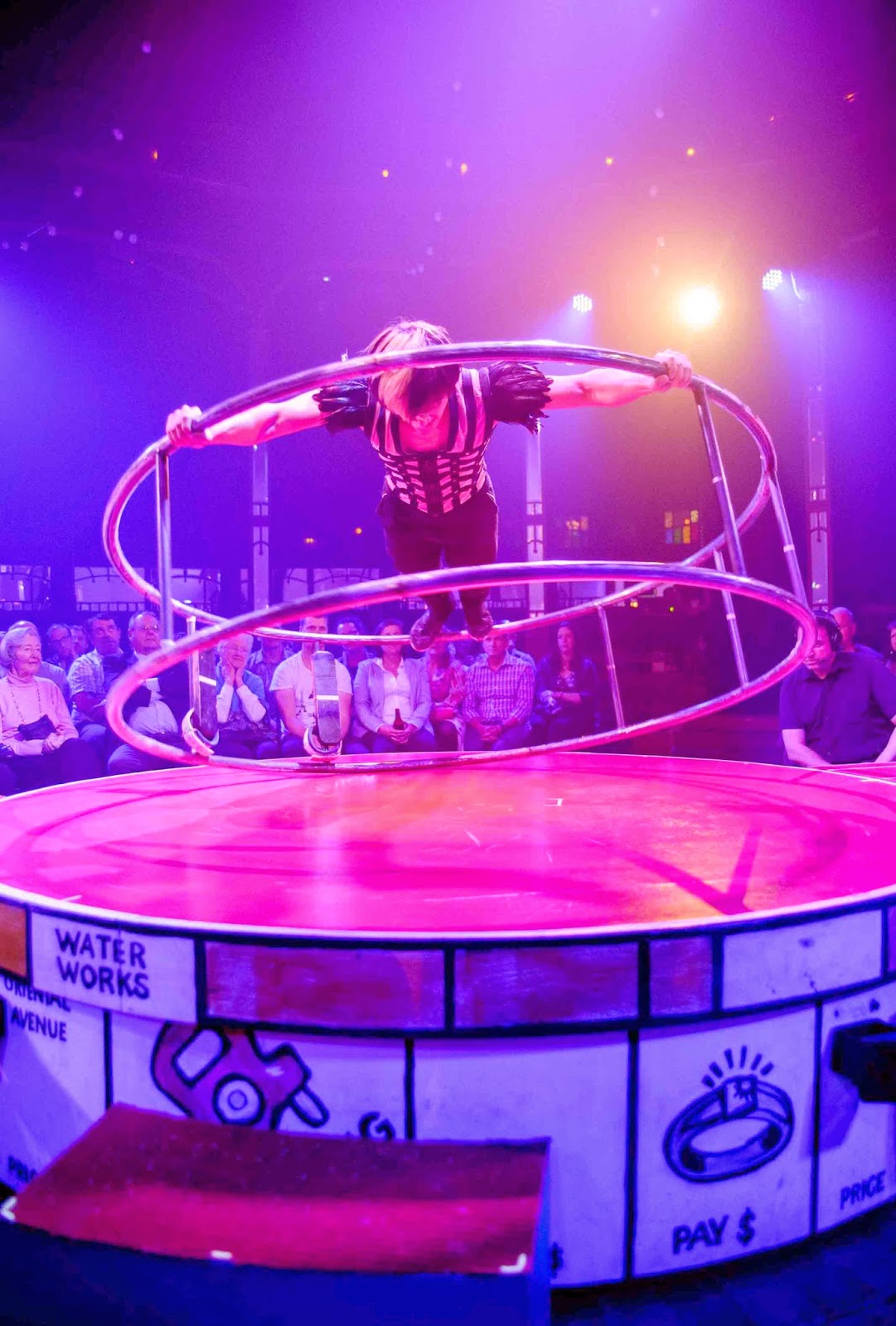 Posted by Kate Herbert at 15:50 No comments:

By Giuseppe Puccini
Melbourne Opera
Atheneaeum Theatre, March 21 to 24, 2014
Alexander Theatre, Monash, May 3 only
I am not seeing or reviewing thisproduction but here is some info. KH 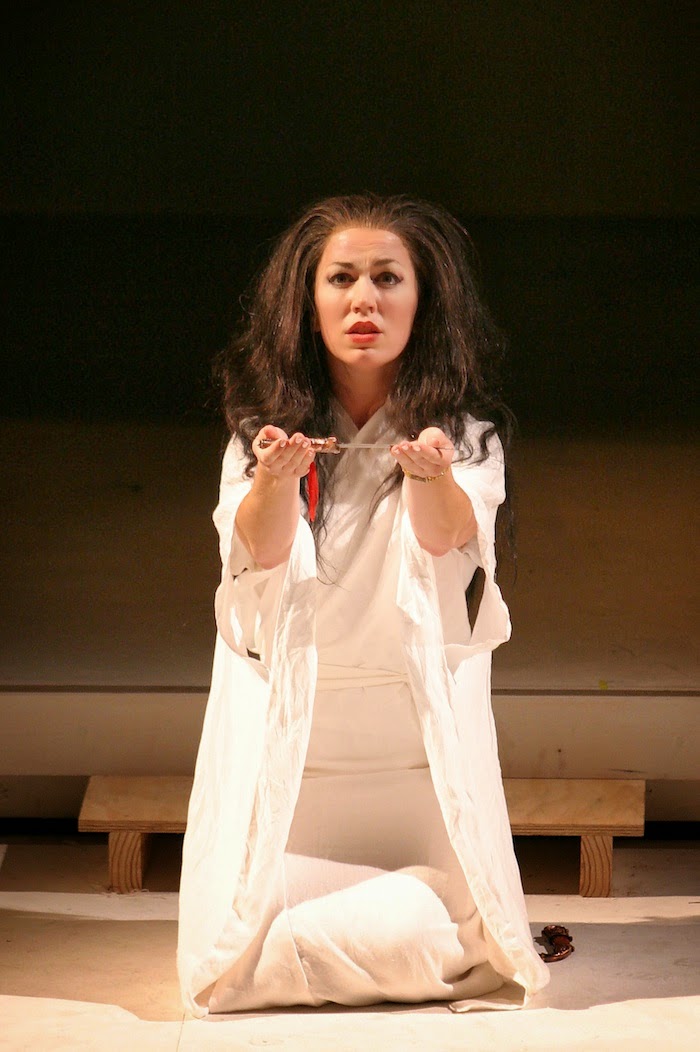 "Madame Butterfly tells the moving tale of Cio-Cio San, a young Japanese geisha tricked into marrying cynical American Lieutenant Pinkerton. After the marriage of
convenience he departs, promising to return soon. When he finally does, it is with
tragic results. The opera features some of the most moving and beautiful music
composed by Puccini, including the famous aria One Fine Day.

Posted by Kate Herbert at 15:43 No comments: