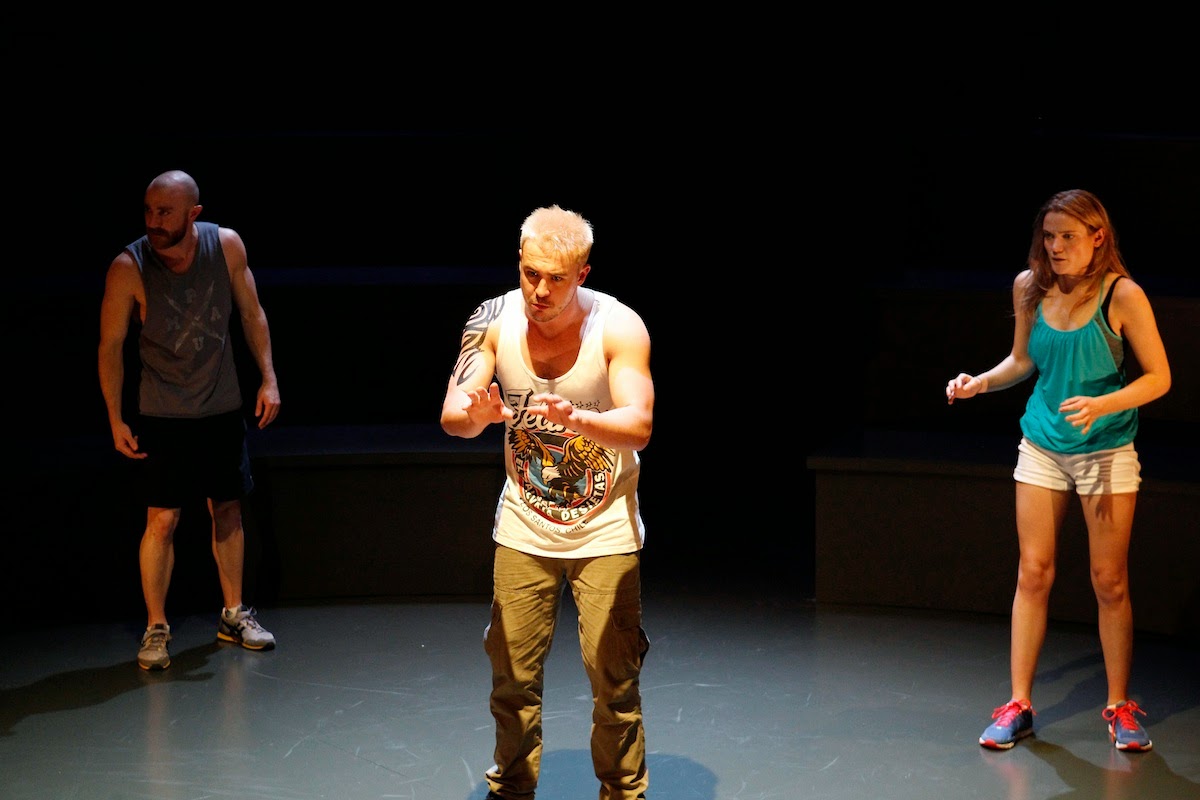 
What happens in Thailand stays in Thailand – or so the rowdy footy players believe when they go on their alcohol-fuelled, post-season trip in Brendan Cowell’s play, The Sublime.

When Dean foolishly agrees to take ambitious, teenage athlete, Amber (Anna Samson), and her friend on the trip, he unwittingly triggers a disastrous series of events, the repercussions of which are far-reaching.

At the centre of the plot is an alarming, sexist culture that permeates the football codes and this is most evident in the unrestrained, sexual debauchery and explicit language that may offend some patrons.

What is even more ominous is the pattern of behaviour that not only covers up sexual assault and violence, but also tolerates it as boyish high spirits or, even worse, encourages it as a team-bonding activity.

The Sublime is a disturbing story that is made more distressing because it begins in a light, playful and comic style that contrasts starkly with its grim and disquieting later scenes. 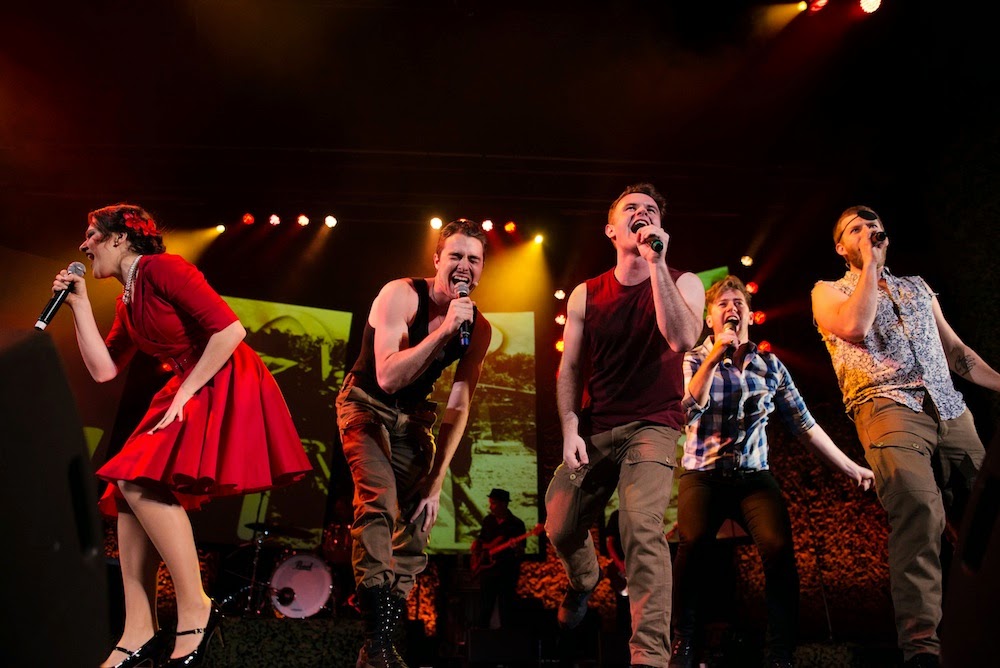 The Vietnam War and the vehement, anti-war protests that surrounded it inspired a flood of unforgettable rock songs that defined the politics and culture of the younger generation during the 1960’s and 70s.

This impressive concert drama, Rolling Thunder Vietnam – Songs That Defined a Generation, threads these classic songs amongst personal stories about Aussie and US soldiers and their loved ones to create an outstanding depiction of the times.

The band is tight and hot under Chong Lim’s musical direction and the singers are bold and harmonious, but the added emotional layer of four characters’ diverse experiences of conscription, war and homecoming makes this show both a musical and dramatic triumph.

At the heart of the narrative is country boy and newly conscripted soldier, Johnny, played with naive patriotism, courage and warmth by Tom Oliver.

As his digger mate, Andy, Wes Carr is loyal and tough-minded and the two are living examples of a Vietnamese girl’s quoted description of Aussies as, “funny, nervous, rugged and kind.”

Matthew Pearce is compelling and statuesque as Thomas, Johnny’s pal who was an exchange student in Australia before becoming a US Marine. Pearce’s singing is powerful and his depiction of the committed Marine’s disillusionment with his country’s warmongering is heartbreaking.

Written by Lucy Prebble, by Melbourne Theatre Company,
At The Sumner, MTC Southbank Theatre, Aug 21 until Sept 20, 2014
Reviewer: Kate Herbert
Stars:***
This is a short review that is NOT for Herald Sun and will appear only on this blog. KH 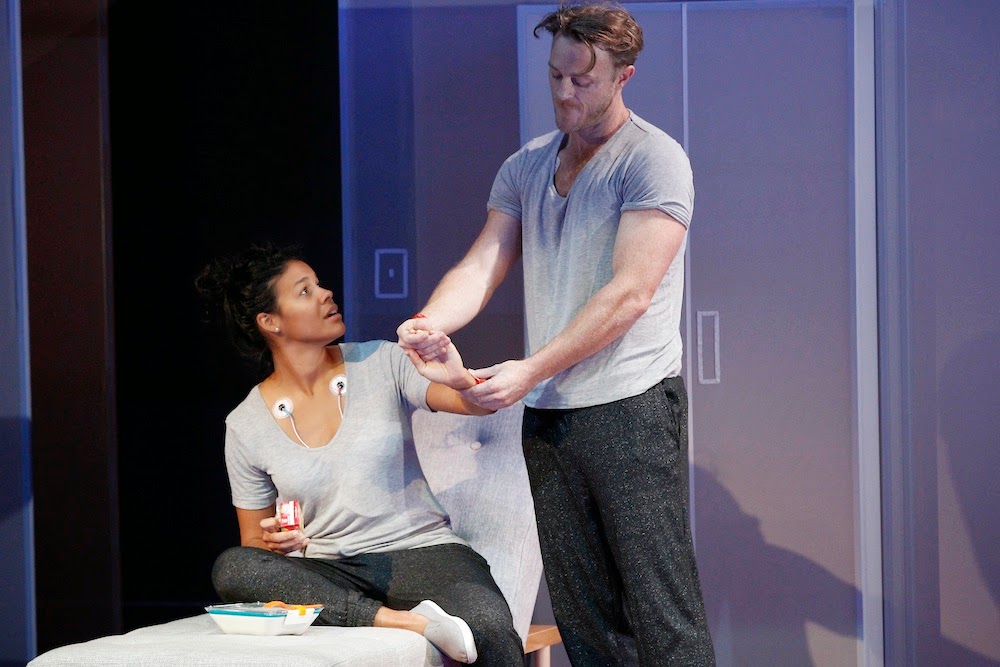 
The themes in Thérèse Raquin, Émile Zola’s 1867 novel, have much in common with soap opera – lust, murder and madness.

Thérèse (Elizabeth Nabben) is unhappily married to her cousin, Camille (Paul Blenheim), a whining hypochondriac who is pampered by his controlling mother, Mme. Raquin (Marta Kaczmarek) who treats Thérèse as a servant.

When Camille brings Laurent (Aaron Walton), his self-serving work colleague and former childhood friend, to the flat, Thérèse and Laurent begin a torrid love affair that leads them to plot and carry out Camille’s murder.

Thérèse and Laurent lurch from one emotional disaster to another, leading to their mutual demise – which again resembles a soap opera plot.

The early scenes resemble Chekhov’s naturalistic “scenes from life”, but the production rapidly and disconcertingly shifts from restraint to bursts of florid dialogue, the characters lose depth, becoming two-dimensional, and the acting loses any subtlety. 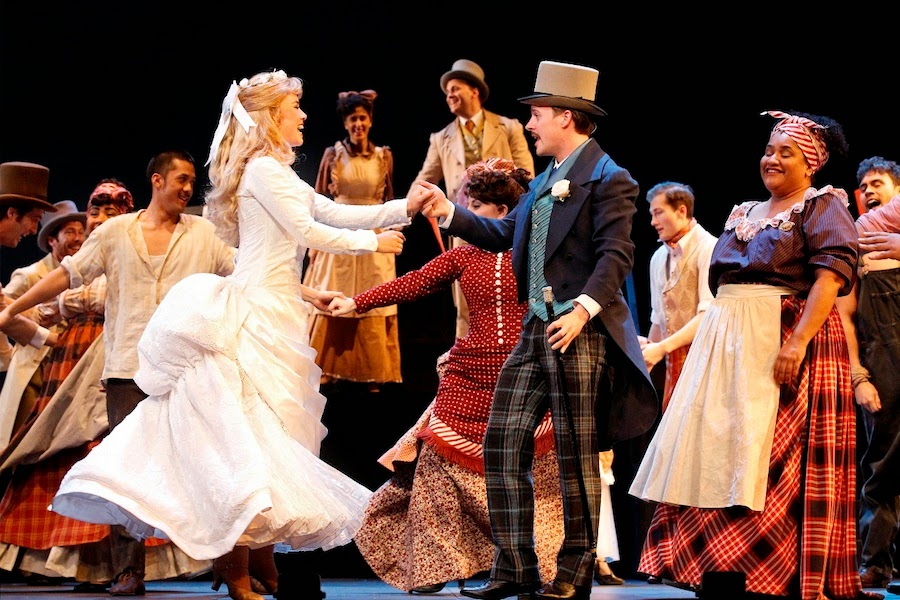 Show Boat may have hit the musical theatre stage in 1927 but it echoes compelling, 21st century issues including racial intolerance, family breakdown and the desire for fame and a quick buck.

It features some of the most memorable and singable tunes by Jerome Kern and Oscar Hammerstein II, but Show Boat also broke boundaries by successfully weaving serious themes into a perky, musical theatre spectacle.

The story spans the years of 1887 to 1927 and tracks the lives of the Hawks family, owners of the Mississippi show boat, Cotton Blossom, and its performers, stage hands and dock workers.

The vivid, cheerful veneer of this floating world of melodrama and music hall acts, masks an underbelly of prejudice and doomed love.

This production, directed deftly by Roger Hodgman, uses a pared down version of Show Boat that effectively narrows the breadth of the original, expansive show.

The result is a taut, captivating production with accomplished and versatile leads, a balance of operatic and musical theatre voices, sassy choreography (Dana Jolly), a nimble orchestra and tight musical direction (Kellie Dickerson).

Perhaps the most recognisable tune in Show Boat is Ol’ Man River, made famous by Paul Robeson, and Eddie Muliaumaseali’i, as Joe, delivers it with his rich, velvety bass and the stevedores’ accompanying harmonies are sublime.

The Girl Who Forgot To Sing Badly ****

Engaging an audience of children in the theatre is a delicate art and Louis Lovett’s solo show, The Girl Who Forgot To Sing Badly, does it with style and humour.

Lovett, an award-winning performer visiting Melbourne from Ireland, populates the stage with eccentric characters in this bittersweet, adventure tale about Peggy O’Hegarty and her parents.

Peggy and her shrill, deaf mother and patient father, run a business as packers; they pack small stuff into bigger stuff, such as putting foxes into boxes.

This production, directed by Lyne Parker, is deceptively simple, but Lovett’s skills are complex and include vivid storytelling, goofy clowning, bold characterisation, melodic singing and evoking an elaborate landscape through mime.

One of his exceptional skills is to effortlessly and imperceptibly draw the children into unexpected participation so that they automatically fill in the blanks in his dialogue, remind him to finish the play, call out helpful hints or clap a rhythm for his dancing without any prompting.
Read more »
Posted by Kate Herbert at 09:15 No comments: