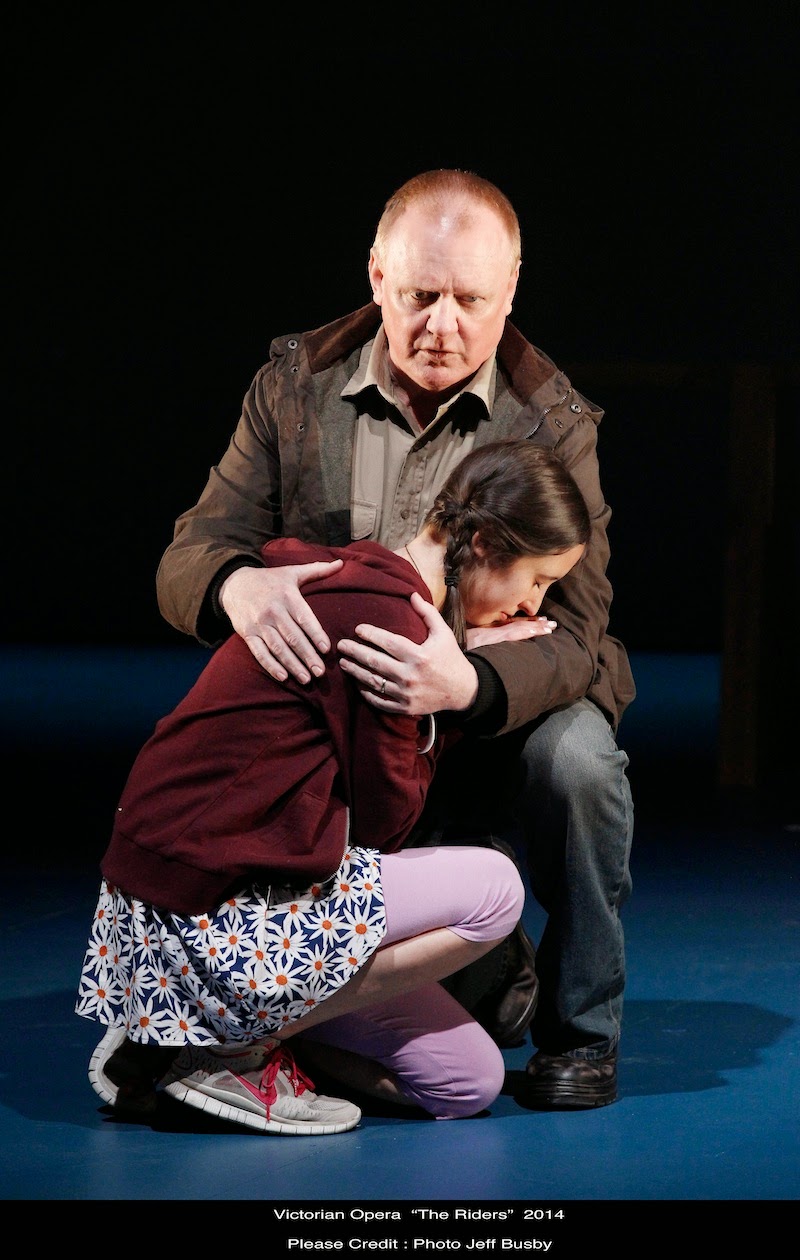 This operatic interpretation of The Riders is a totally different animal from Tim Winton’s award-winning novel upon which it is based.

There is a haunting quality to the music (Iain Grandage), libretto (Alison Croggon) and style of this production (Marion Potts) that captures the grim tone of Winton’s novel, but the narrative is necessarily condensed to fit into 100 minutes of stage time.

After renovating their dream cottage in Ireland, Scully (Barry Ryan), awaits the arrival from Perth of his beloved wife, Jennifer (Jessica Aszodi), and 7 year-old daughter, Billie (Isabela Calderon), but is shocked when a traumatised, silent Billie arrives alone on a plane.

Driven by his obsessive love and with Billie in tow, Scully trawls familiar European locations, searching in vain for his wife who has vanished like smoke leaving only “the wounds of absence”.

This is an emotional story about a man’s consuming love and devotion that smothers his wife and almost pushes him to “fall off the edge of the world” in his grief, loss and isolation.

Grandage’s eclectic composition, conducted by Richard Mills, resonates with folk music of Ireland, Greece and France as well as referencing Modernist, Romantic and Serialist styles. The music shifts from dreamlike ripples to surging oceanic waves of brass and strings or pounding percussion.

Croggon tells Scully’s story simply and evocatively, through poetic lyrics and rich metaphor that heighten the mournfulness and confusion of Scully and Billie as they struggle to comprehend Jennifer’s abandonment of them and to fill the void caused by her absence.

Rod Quantock-Invitation to a Revolution
At Lithuanian Club, From Sept 24, 2014
Melbourne Fringe Festival
You know I love Rod Quantock but I can't see or review this one. Go see him doing his revolt against Abbott. Vive La Revolution! KH 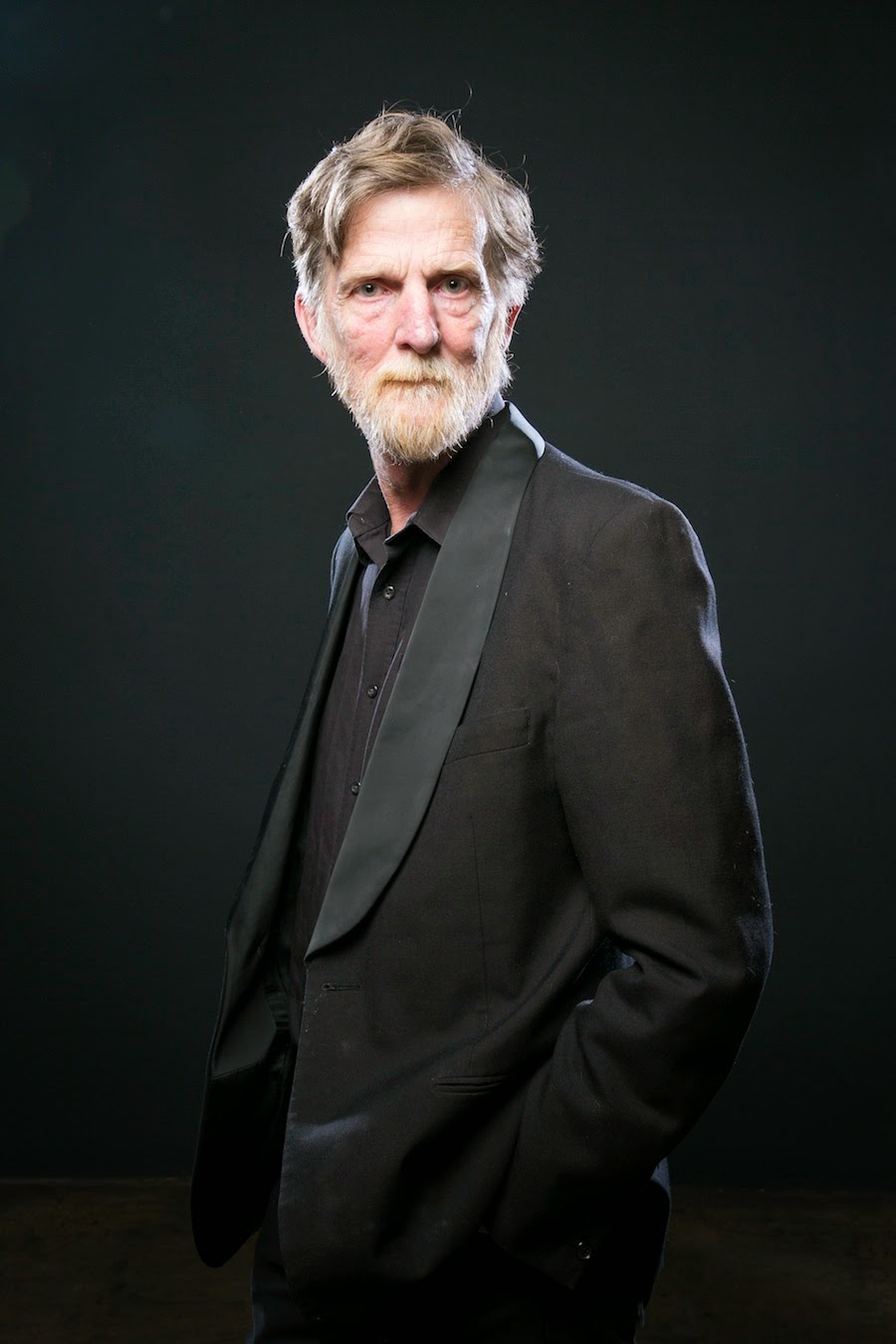 
Fringe. September marks the first anniversary of the election of the Abbott Government and what


better way to celebrate than an evening with Sir Rod (because he loathes the Liberals too).

"Each night, Sir Rod will recruit the audience, train them as operatives, assign them to Sleeper


the Glorious Revolution begins? You’ll have to be in the audience to find out.


Fringe after a near 20-year absence. “The Liberals are torturing refugees as a warning to others.


"That’s what the Mafia do,”  said Sir Rod. “But Big Tony and his Gang of political thugs (or Big Ears


and The Noddies as I call them) are mere tools of the Dark Lords and Lady Reinhardt. If this were


France they’d be donning their berets and dusting off the guillotine!”.

"Quantock is one of the reasons that Melbourne is the live comedy capital of Australia. As a


pioneer of stand up comedy, Quantock’s brilliance is in his ability to evolve. He is relevant and


Howard. In 2014 he’s back to take on Abbott and his speedos. In a bold (and possibly


treasonous) move, Sir Rod has announced The Revolution. “The Forces of Evil must be


conquered and, in the absence of an actual Australian Opposition, I will start the revolution ! Viva


la Revolution! Viva, el Rod! ”. Don’t miss one of our very own national treasures in his triumphant


Collingwood-Carlton match. DISCLAIMER: Should the Abbott Government collapse before The


Fringe starts, Mr Quantock reserves the right to do a show about living in a share house in the 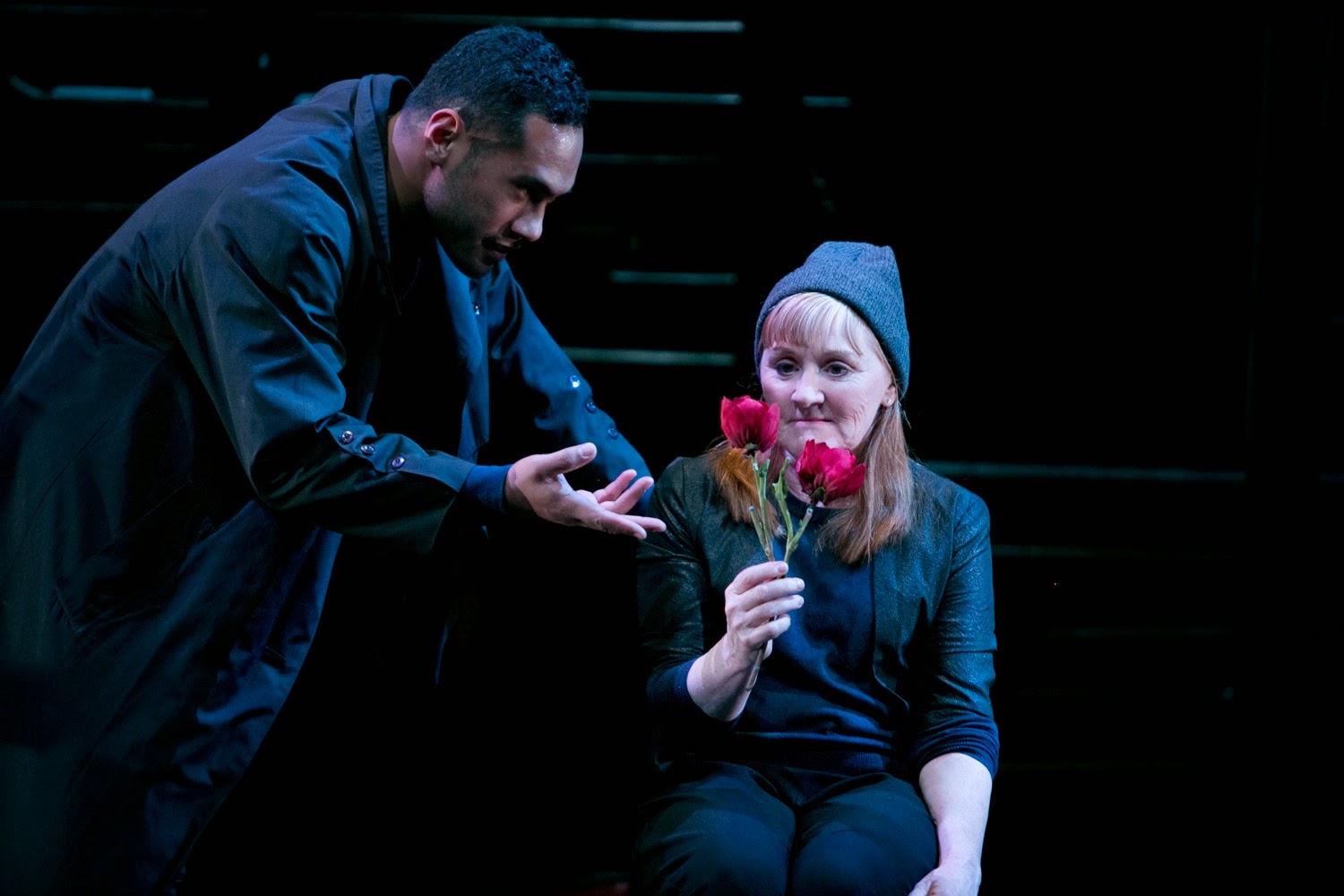 If Julie Forsyth did an ad for soap powder I’d fall over myself to see it, so it is theatrical bliss to see her play the mischievous Puck in Peter Evans’ riotous production of The Dream.

In Evans’ abbreviated, 90 minute version of Shakespeare’s A Midsummer Night’s Dream, Forsyth is accompanied on stage by a versatile cast including Richard Piper, another gifted performer of both comic and dramatic roles.

With an evocative slatted, wooden design (Teresa Negroponte) and swift, seamless scene changes, the stage is transformed and we are transported from the court of the Duke (Ray Chong Nee) to the forbidding, enchanted forest inhabited by Fairy King Oberon (Chong Nee) and his Queen Titania (Janine Watson).

Evans transposes Shakespeare’s first scenes, opening with the inimitable comedy of the amateur actors/tradesmen (known as the Mechanicals) planning to perform their unwittingly comical version of the tragic-romantic tale of lovers, Pyramus and Thisbe.

In this dynamic, inventive, deftly directed production, the actors play multiple roles, transforming themselves physically and vocally as they shift swiftly between characters.


An unauthorised satire of Death of a Salesman
Presented by Darebin Arts’ Speakeasy and SeeSault
Northcote Town Hall, Studio 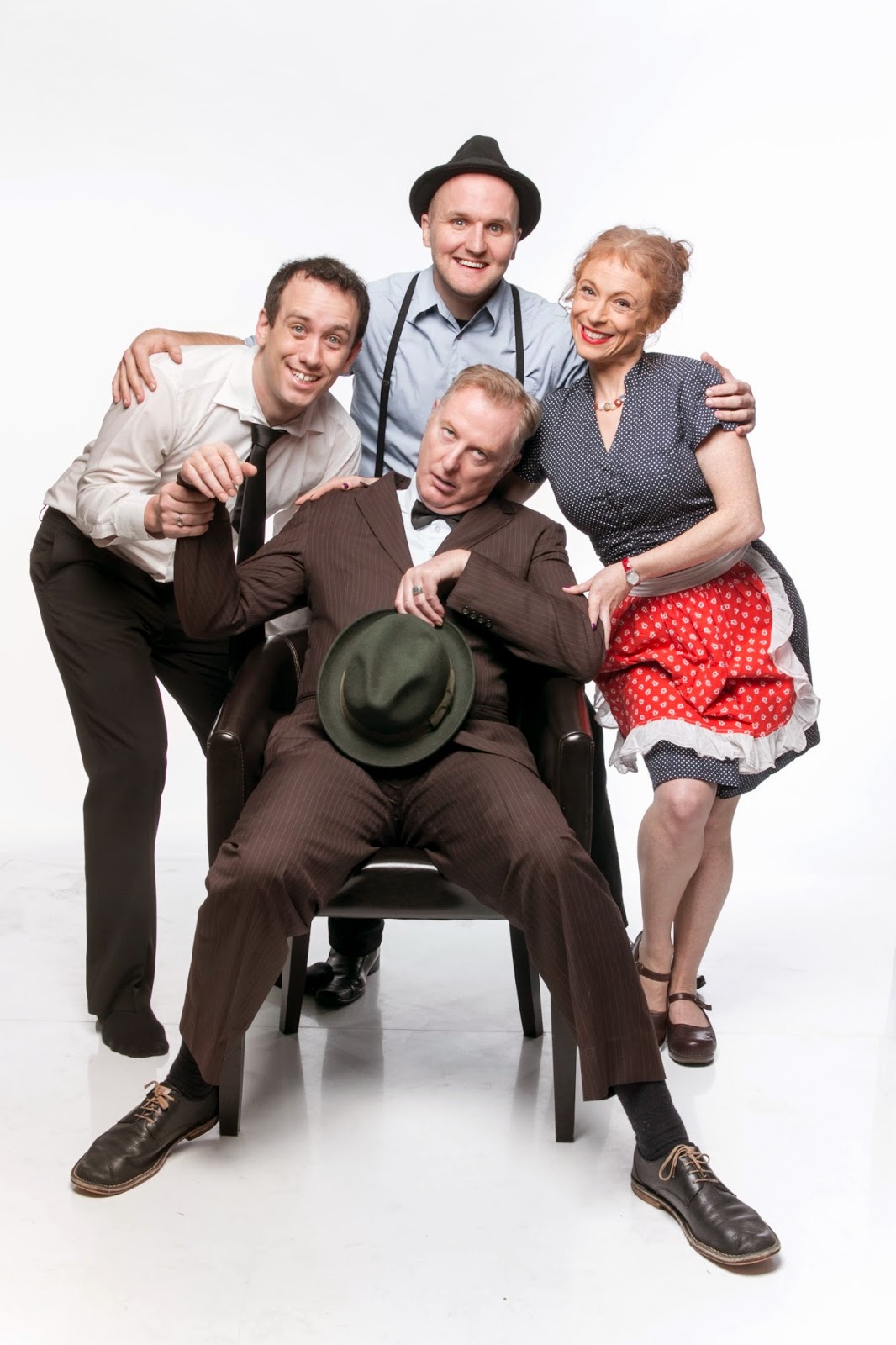 Posted by Kate Herbert at 15:48 No comments:

I am not seeing or reviewing this show but you may be interested. KH 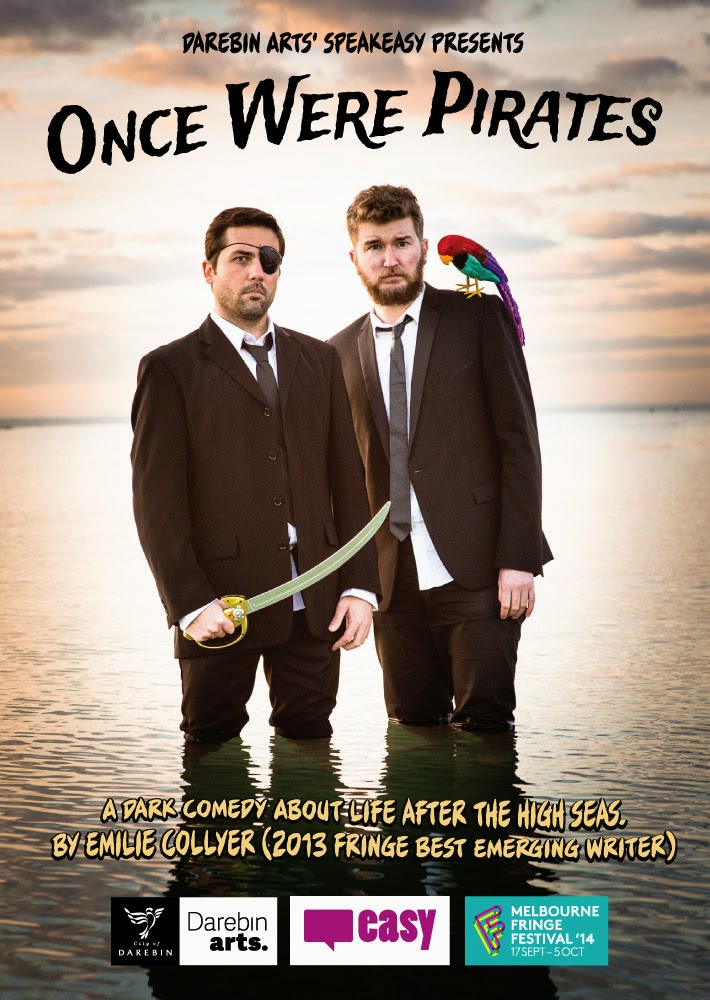 From Media Release
"Shane and Gareth used to be pirates. Now they are stuck in the real world, trying to figure out how to live. A tale of two bad men trying to make good." 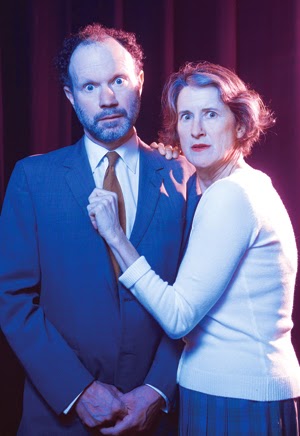 
If you’re a teacher who dreams of being a poet, a composer or a painter, Dead Set will ring some bells for you.

Life partners, Sue Giles and Ian Pidd, now reputable directors, last performed this gentle, quirky show 20 years ago when, as comedy duo Shaken and Suspicious, they toured with their young children in tow.

Verity and Lionel write The Great Australian Musical called Humping My Swag, with its lead characters Mary, a widow with two children, and the Stranger she loves who faces hanging for a crime he did not commit.

The show is warm, sweet and funny but also bumpy and charmingly shambolic, with the highlights being the goofy songs with witty lyrics, Giles and Pidd’s wry humour and the ever-so-slightly demented but recognisable characters that they inhabit on stage. 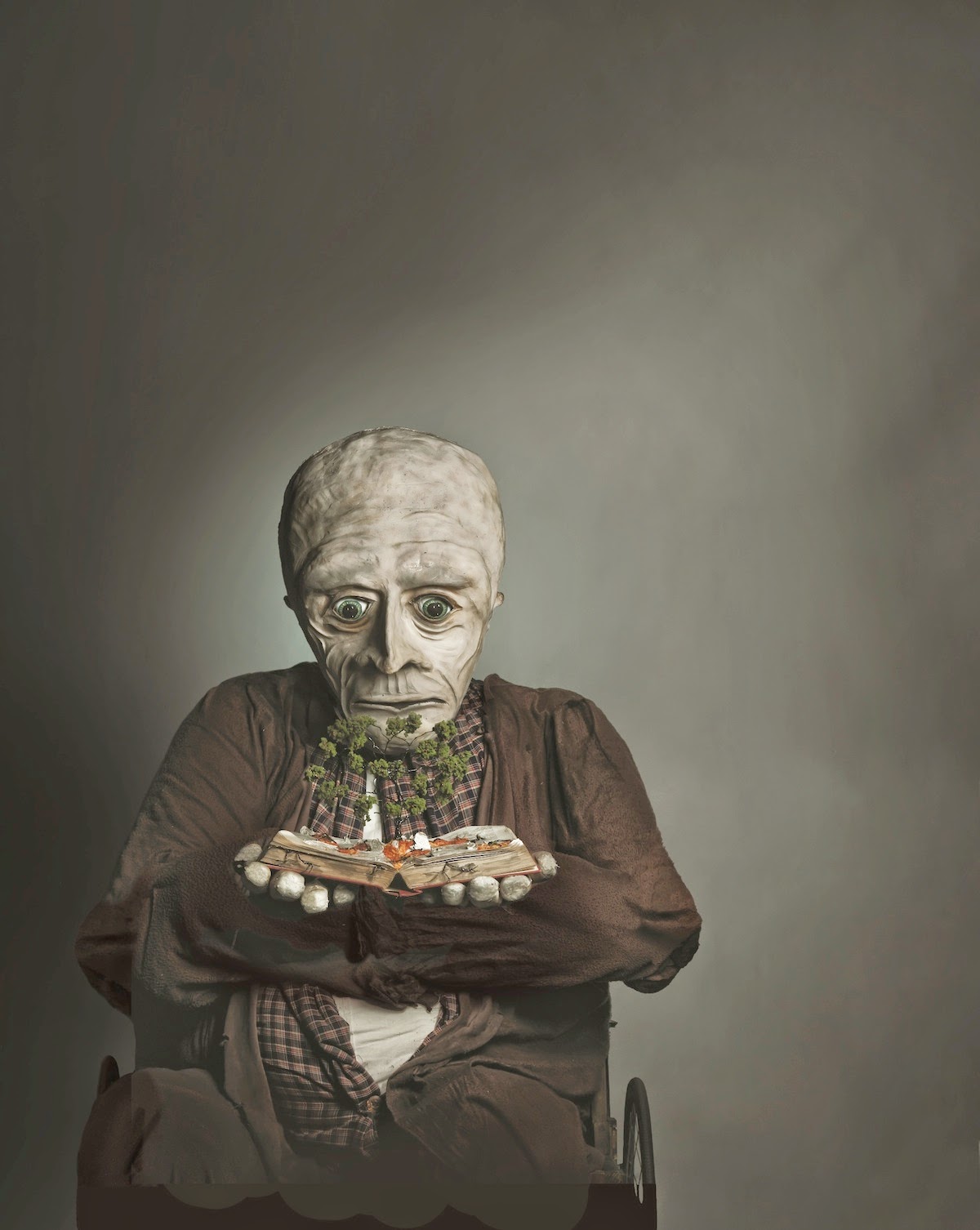 Posted by Kate Herbert at 17:25 No comments: 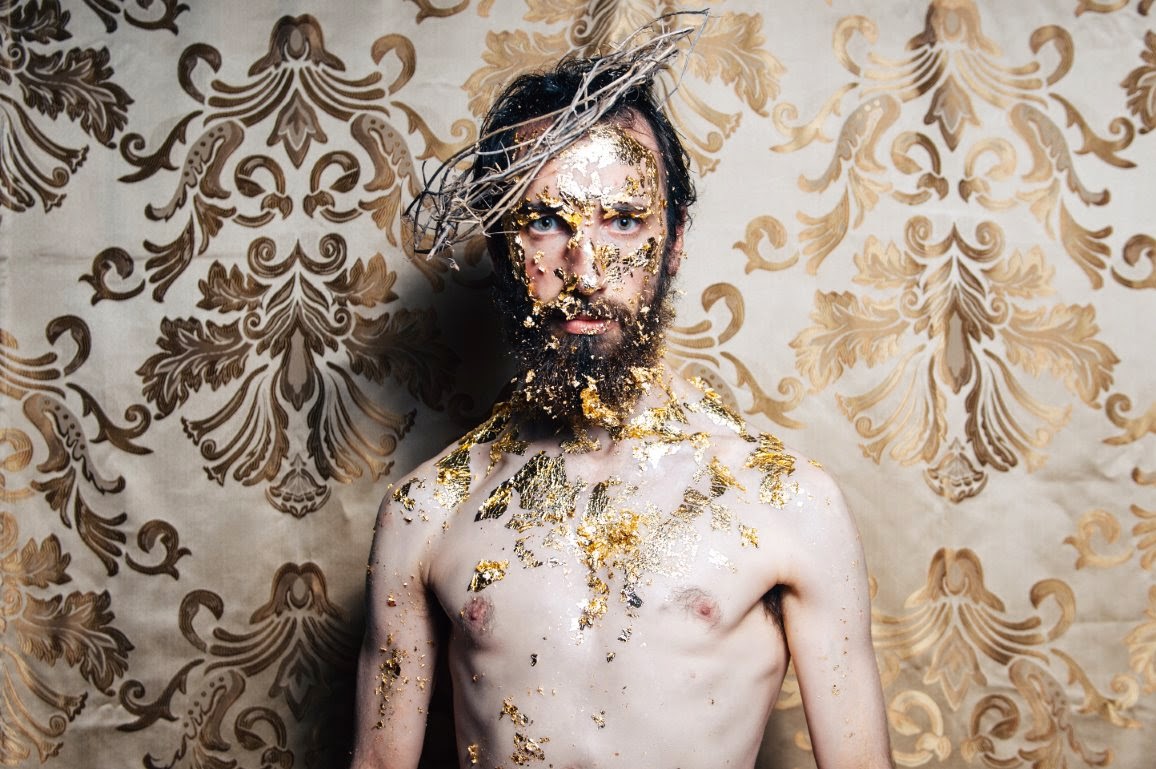 From the Media Release
"Wilson portrays a God-king who realises he is human and comes out with a treasonous consanguinity of celebrity, corruption and religious self-love.

"One of Shakespeare’s least performed texts, Richard II tells the story of King Richard the Second, who rules England with absolute power and is widely criticised for wasting England’s money on pointless wars and implementing unfair taxes.  However, when King Richard banishes his cousin Henry Bolingbroke (the soon-to-be King Henry IV) from the kingdom, his unwittingly sets in motion a series of events that will lead to his overthrow.

"A two-hander, with Olivia Monticciolo (Bell Shakespeare’s Phèdre) playing Bolingbroke, Wilson’s adaptation explores notions of celebrity, corruption and power and promises to be a thrilling, intelligent and scathing allegory for leadership in the 21st century and Australia’s own political climate."  Media Release

Posted by Kate Herbert at 09:41 No comments:

Music by Tom Kitt; lyrics by Amanda Green; book by David Lyndsay-Abaire;
Based on the best-selling novel by Nick Hornby; presented by Pursued By Bear
At Chapel off Chapel, from Sept 11 to Sept 21, 2014
Reviewer: Kate Herbert
Stars: **
Review also published in Herald Sun online on Fri Sept 12 and later in print. KH 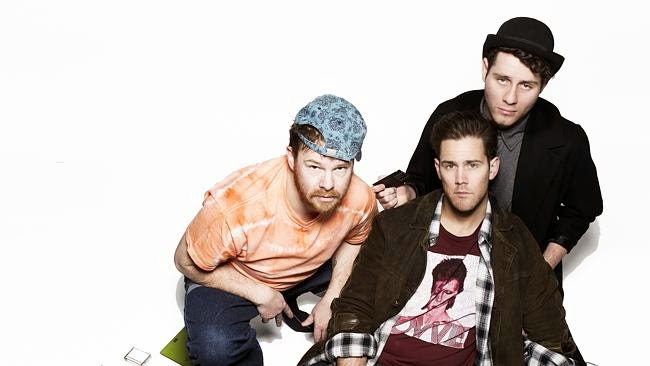 After the popular book and movie about a bloke who runs a record store stuffed with obscure vinyl discs, a third life as a musical seems an obvious step for High Fidelity.

High Fidelity –The Musical emphasises the cynicism of Nick Hornby’s original, 1995 novel rather than the perkily charming nostalgia of the John Cusack movie from 2000.

Unfortunately, David Ward’s production lacks finesse with its messy direction, uneven acting and vocals, awkward design and confined stage space that pushes the actors to the very front of the stage, restricting the sight lines to zero in some scenes.

The greatest asset is the tight, 10-piece band under musical director, Frankie Ross, but Ward unwisely secretes the band behind a curtain in the back corner of the cluttered stage.

Brooding, 30-something Rob Gordon (Russell Leonard) is a musical elitist so blinkered and obsessed with classic and obscure music that he runs a Brooklyn record shop, Championship Vinyl, that has no paying customers.

Instead, it has plenty of weirdoes such as his two co-workers, painfully shy Dick (Liam O’Byrne) and loudmouth Barry (Scott Mackenzie), and other denizens of the store including TMPMITW, “The most pathetic man in the world” (Tom Russell).
Read more »
Posted by Kate Herbert at 17:00 No comments: 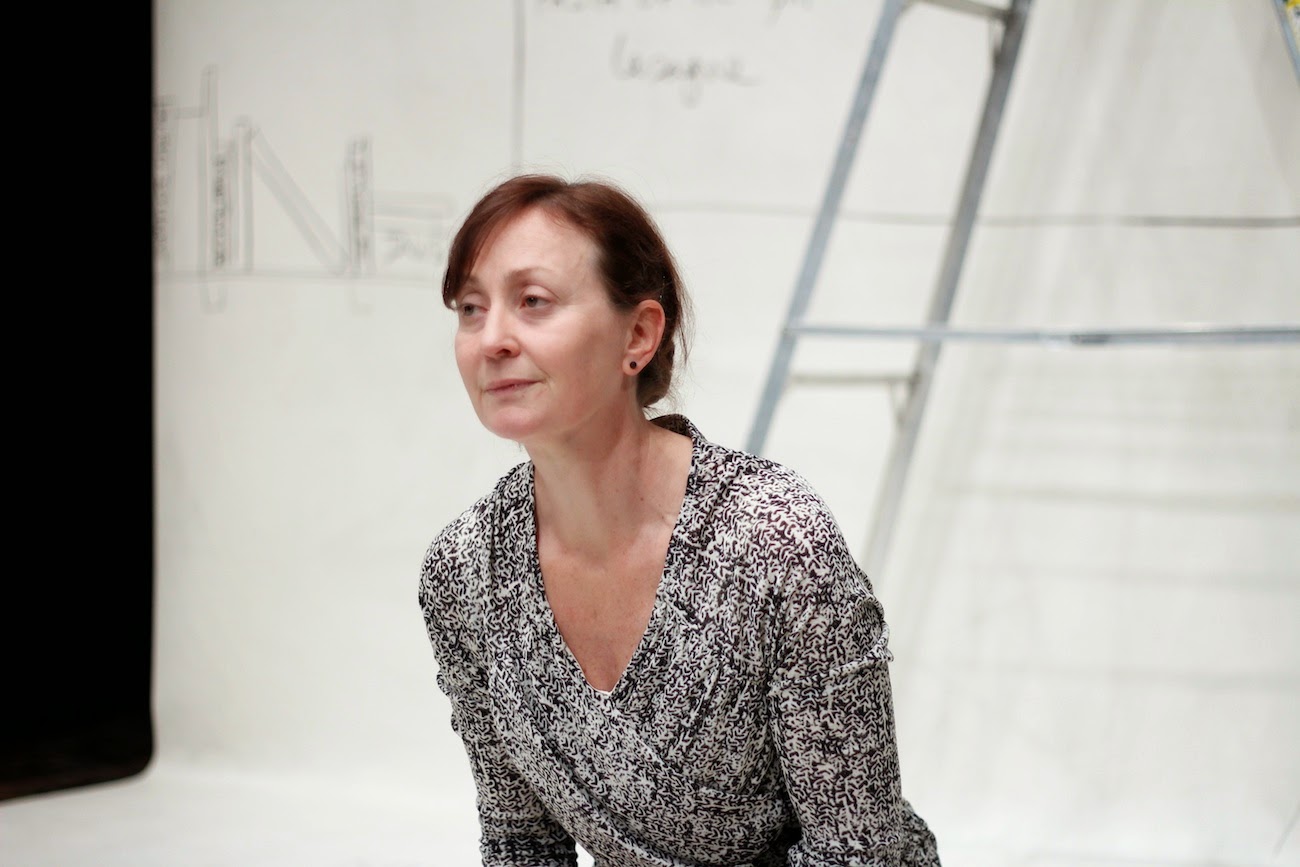 Imagine waking up one day to discover that your partner has died in mysterious circumstances – and that he was living a secret and disturbing double life.

Such is the distressing and poignant experience of the woman in Waking Up Dead, written by Trudy Hellier and developed with imagination and vision by collaborators, Susie Dee (director), Caroline Lee (actor) and Ian Moorhead (sound designer).

Lee is quietly compelling as this reserved, conservative woman, playing her with a haunted and bewildered quality that epitomises her grief and masks her repressed but seething rage.

She is confined to a cell-like space that is framed by a white paper wall and floor that create an atmosphere of entrapment, but also a sense of privacy as the woman struggles to make sense of her life and her grief.

The white environment also provides her with blank surfaces upon which to sketch her memories of her past life with the man she no longer recognises as her husband.

She starts her story in 1980 then moves forward chronologically by increments to 2007, scribbling dates, notes and quotes, and sketching furniture that identifies locations and conjures a black and white landscape of her murky past. 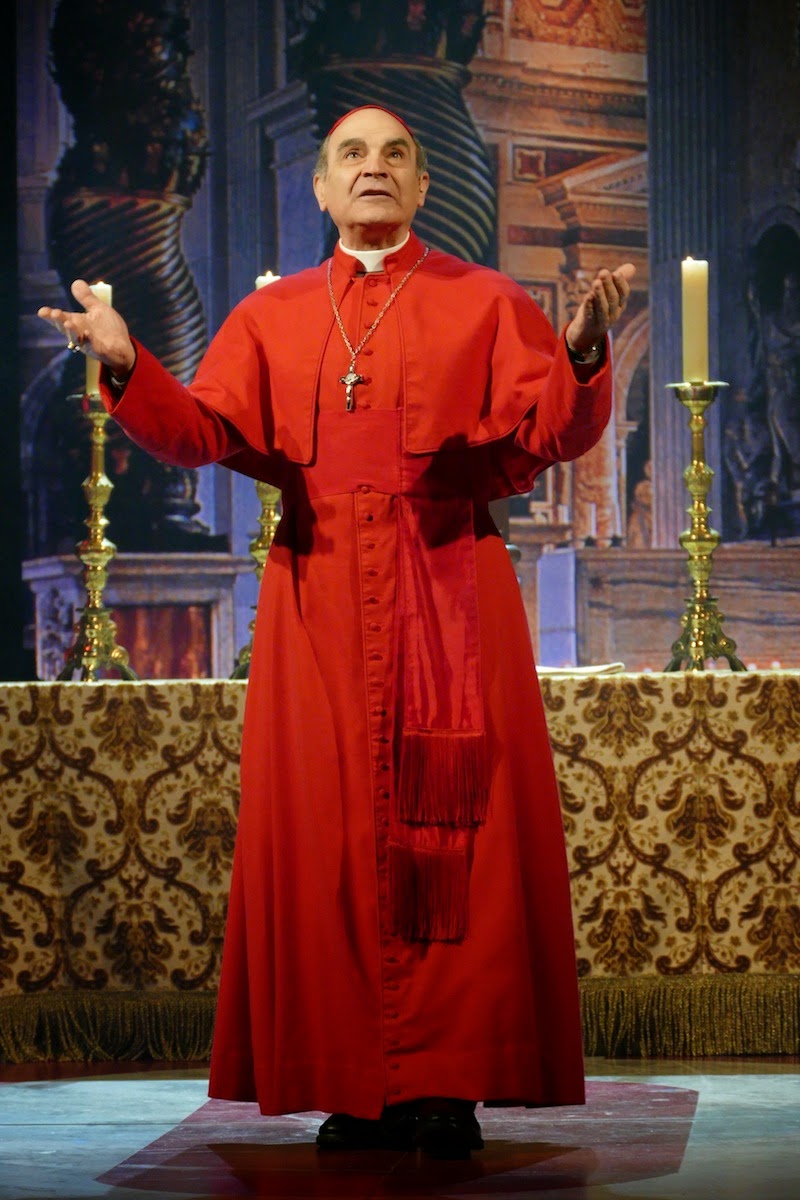 It makes one’s spirit soar to witness the consummate performance of David Suchet and the distinguished cast of actors in Jonathan Church’s sleek production of The Last Confession.

The play extrapolates on events in The Vatican before and after the election and mysteriously sudden death of Pope John Paul I in 1978, 33 days after he was elected Pope and before he could implement his radical, liberal reforms of the Catholic Church.

Suchet plays Cardinal Giovanni Benelli, a serious, businesslike, Catholic moderate who struggles with doubts about his faith and challenges the intransigent conservatism of the cardinals who dominate the Curia, the Vatican bureaucracy that advises the Pope.

Suchet enlivens the role with the full force of his resonant, dark-velvet voice and piercing gaze that we recognise from screen performances such as the meticulous detective, Hercule Poirot, and the villainous terrorist in Executive Decision.

Providing a narrative framework for Roger Crane’s play is Benelli’s fictional confession to The Confessor who is played with a slightly sinister, critical edge by Philip Craig.

Benelli’s confession acts as a narration that tracks the trajectory of events from the last year of Pope Paul VI (Donald Douglas), to the election of Albino Luciani (Richard O’Callaghan) as Pope John Paul I, and the associated power struggles, reform agendas and financial corruption of the Vatican Bank.