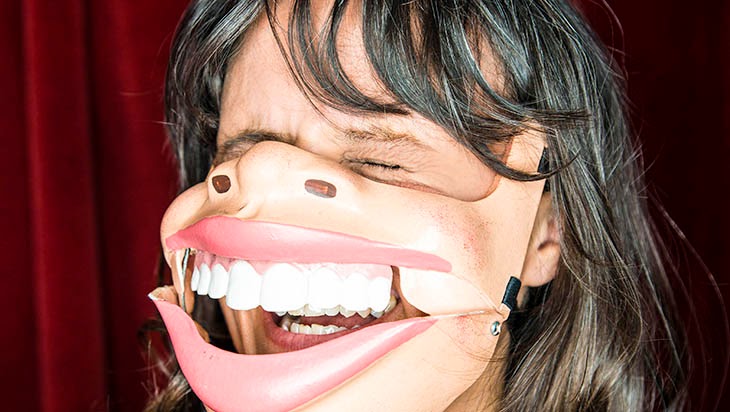 Nina Conti conjures some riotous moments in her show, In Your Face, and many of them are courtesy of audience members who become Conti's human ventriloquist puppets.

Joining Conti on stage for some mischievous ventriloquist shenanigans is Conti's long-standing partner in comedy crime, the jaded but wicked Monkey hand puppet.

While Nina is sweet and charming, Monkey is rude, insulting and gets to say all the things Nina thinks but couldn't possibly say out loud without sounding like a jerk. The Monkey can be a jerk and we laugh.

"What he says is not what I think," she pleads. "Yes it is," quips the Monkey, her other self.

After some chat with people in the front row, what follows is some risky comedy that relies not only on audience participation but individuals coming on stage, wearing half-masks and being manipulated in the nicest, funniest way to look like idiots. 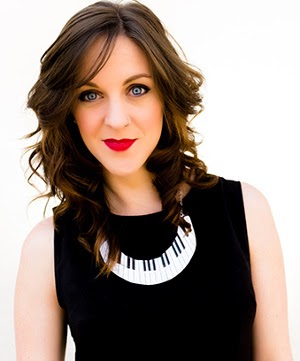 Gillian Cosgriff's musical comedy talents are manifold and her original songs are the highlight of her show, Whelmed.

Seated at her Roland keyboard, she opens with her song, This Bit Is Not In The Show, a cunning little jazz tune with clever lyrics that provide warnings about potentially offensive material (there isn't really any), exit doors and the merciful lack of strobe effects or smoke machines.

Between her cleverly composed songs, Cosgriff, who is in her 20s, delivers standard stand-up material in her particular, nervy, rapid-fire style of banter.

She prattles about begin borderline Obsessive Compulsive, an over-achiever and procrastinator (Her hybrid word being procrast-achiever), a combination that makes it almost impossible for her to sit down and write a song because it needs to be perfect!

She admits that she fritters her time away on Facebook, justifying the time-wasting by asking Facebook friends to make suggestions about their irrational fears so she can use them in her songs. 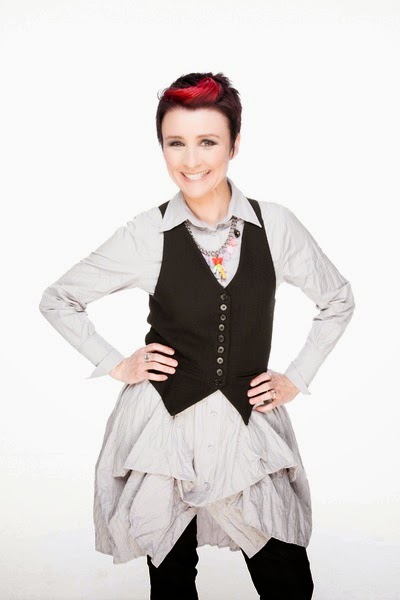 Cal Wilson says that her show title, Undercurrents, refers to all those secret and peculiar inner thoughts that we never reveal to the world. Evidently, she has plenty of them.

Two otters and an egg beater (no spoilers) encapsulate what she sees as her own, eccentric, meandering musings and she reincorporates those otters at regular intervals to make her point.

Wilson chatters about her passion for Christmas and all things Christmassy, particularly since having her child, and her fervour extends to Santa, reindeers, gift-wrapping and when to take down a Chrissie tree.

Her son's antics and childish idiosyncrasies provide lots of material but she misses what seems a golden opportunity to get laughs from the thoroughly modern, inner-city hipster names of her son, Digby, and his friend, Jasper.

Wilson mines more material from her hobby of relentlessly but playfully tormenting her unflappable husband with grotesque seductions or a mind-blowingly annoying, shrill voice she uses to drive him (and us) insane. 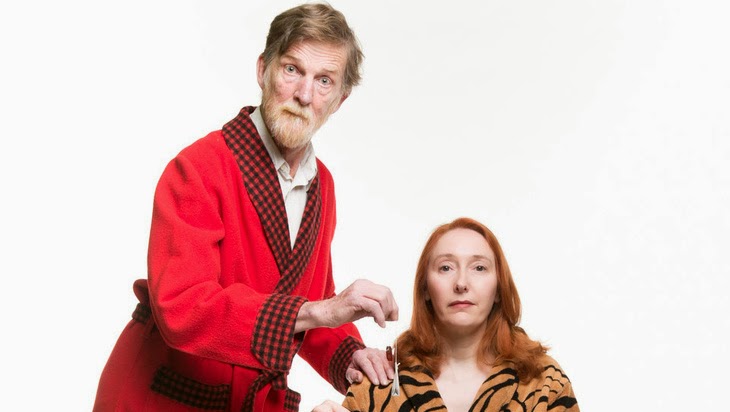 If you think of Drivetime radio on 774 ABC, add a panel interview format, two smart and witty hosts, a parade of guests who either perform in the Comedy Festival,  are obsessed with the Fest, or buy tickets to the Fest, then you have Drivetime With Two Leggy Redheads.
Comedy Theatre, until 19 April 2015
Melbourne Comedy Festival 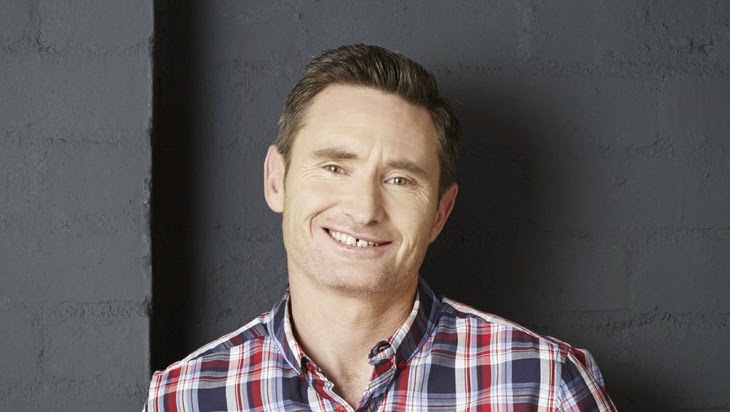 Employing his own brand of feigned oafishness, Dave Hughes purposely stammers and bumbles his way through a routine about familiar and predictable topics including family, fame, travel and fans.

After teasing the front rows of the audience and taunting the latecomers, he slams Jetstar for its appalling treatment of him and vows to spend the next 10 years bagging them – a plan that garners feverish applause.

He has a red-hot go at the pseudo-celebrities on reality TV, the Bombers and their drug scandals and The Gold Coast for its Bogans with their sleeve tattoos.

He trades on his raddled looks that make him appear as if he has gone three rounds with a bottle of Jim Beam and a prize fighter, although Hughes is totally clean living – he says.

He vigorously attacks his targets first, then retreats, laughs and apologises with studied, insincere sincerity.

To pacify his audience after his irate rants, he peppers his hour of stand-up with the repeated phrases, “You’re a great crowd. Never forget it”, and “Good on you. Good on me. Good on them.”


Wil Anderson’s stand-up is fast and furious and his improvised riffs when he goes off script provide some of the funniest moments in his new show, Free Wil.

If normal chatter is 3 words per second, Wil must run at 10 per second to keep up with all his intense and rambling thoughts and theories.

His material is eclectic, smart and hilarious, covering a dizzying array of topics, many of which are about his life in Los Angeles where he now lives most of the time.

Like other comics, he starts the show talking to, or tormenting (depending where you are sitting) audience members and latecomers.

“What’s your name? What do you do for a living?” are his standard icebreakers with alarmed audience members. 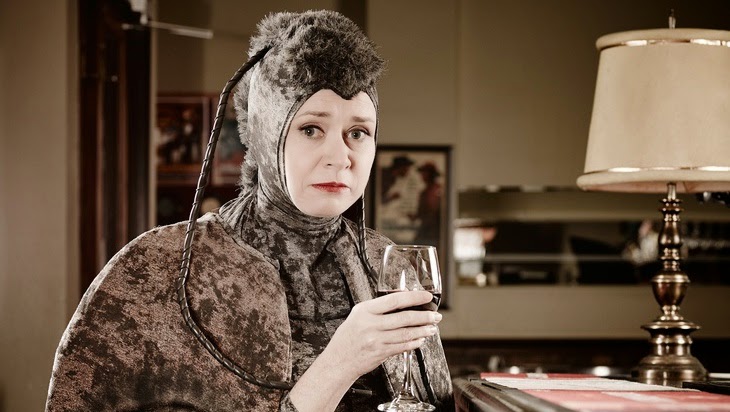 Judith Lucy’s distinctive brand of stand-up comedy is a blend of unashamed, confessional humour and unbridled naughtiness that makes her simultaneously adorable and a bit alarming.

Looking sassy, she arrives on stage shaking maracas and wearing a figure-hugging, black gown reminiscent of a 40s movie star.

Lucy’s show may be cryptically titled Ask No Questions Of The Moth, but she has no qualms about relentlessly questioning audience members who had a bad year in 2014.

She strolls among the front rows, teasing audience victims in her inimitable, laconic and strangely unthreatening style while engaging with their cheerful or tragic stories.

Her material is clever and hilarious, but often it is simply her vocal quality and sardonic tone that make us laugh.

Perhaps her greatest comic asset is her measured, modulated, singsong voice that is almost a parody of a TV advertorial presenter or a CWA woman explaining a scone recipe to an idiot.

The Arena Spectacular, by Global Creatures

All pics below by Joe Calleri from Media Call today, Wed 25 March 2015 at Hisense Arena. 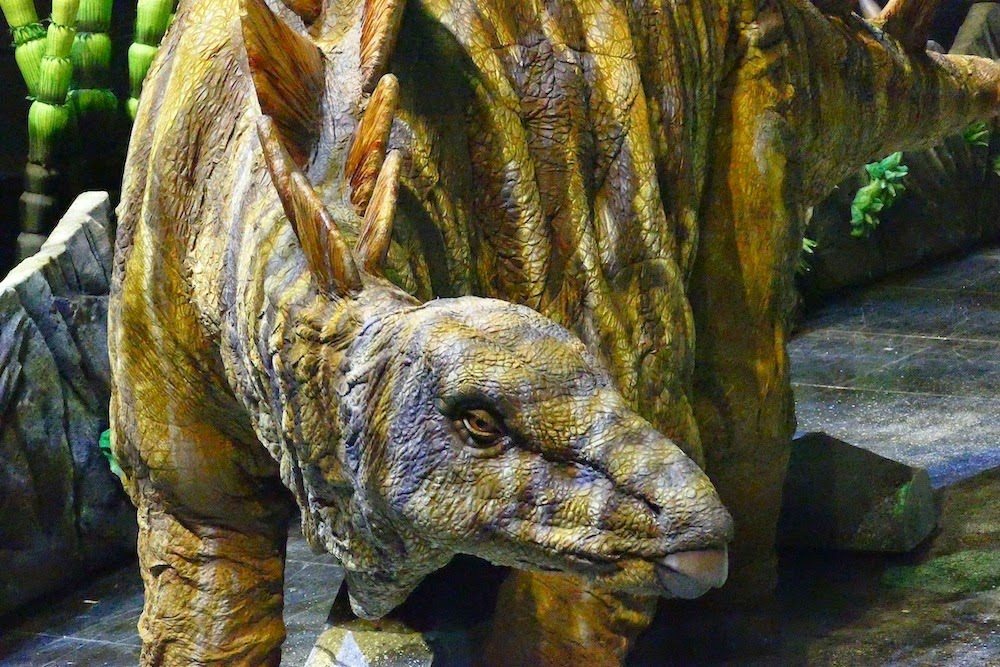 This is not C.G.I.(Computer Generated Imagery)! These scaly, feathered and ferocious dinosaurs are real!

Well, they may not be the real flesh and bone of those 65 million-year-old dinosaurs, but they are certainly realistic and quite a bit scary – except for the cute, baby dinos, of course.

For any junior dinosaur fanatics – a title that describes most kids from 5 to 12 years – this is a Jurassic treat that titillates and terrifies parents and children alike.

We journey through 200 million years of the dinosaurs’ reign on earth, witnessing the splitting of continents, the transformations in the landscape from parched, Triassic deserts to the lush greenery of the Jurassic period.

In this rapid fast-forward through millennia, Huxley the Palaeontologist (Andrew Blackman) narrates the earth’s tale of volcanic eruptions, oceanic turmoil and even bush fires.

We see the evolution of these creatures, watch the carnivorous dinosaurs evolve to walk on two legs and the herbivores escape from their predators. 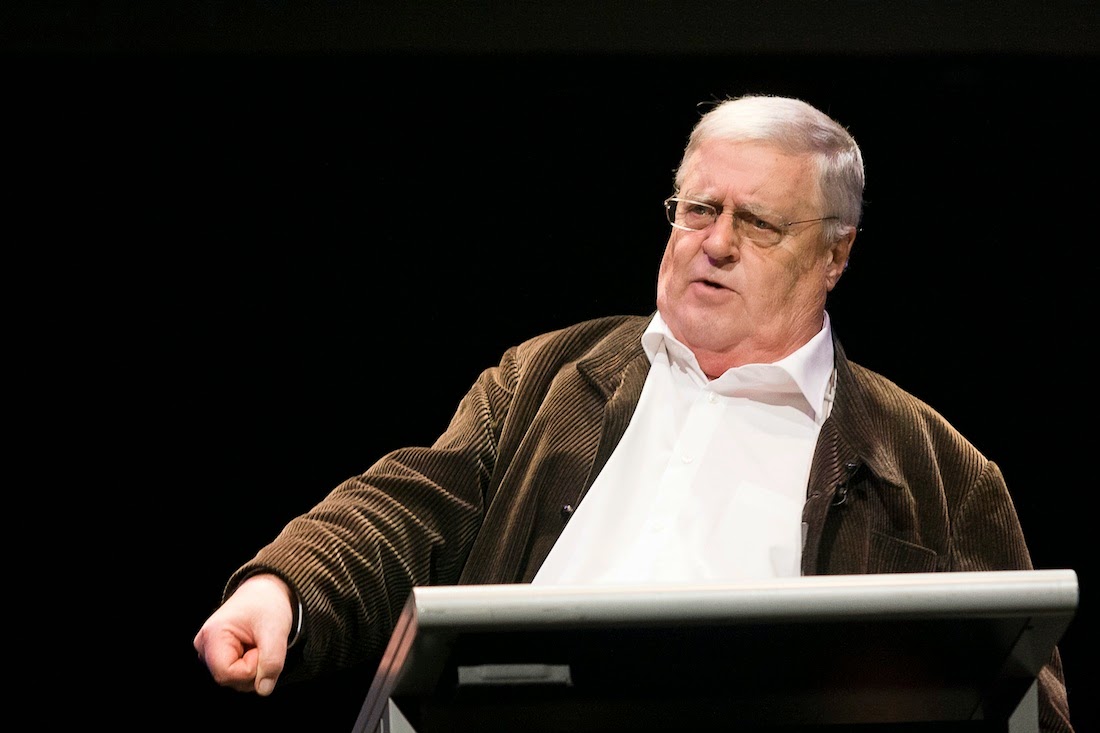 Max Gillies is one of our greatest, Australian political satirists and, after 40+ years of lampooning national and international leaders, his depictions are just as acerbic and disturbingly accurate.

Once Were Leaders does not feature the elaborate wigs and make-up seen in Gillies’ previous live productions or in The Gillies Report from the 1980s.

It is a blend of political commentary and analysis of satire that are illustrated by a retrospective of Gillies’ most memorable portrayals of leaders.

Apart from the insertion of snippets of video, Gillies does this without costumes and prosthetics, but by shifting from an easy, conversational tone into his notable speeches, written by former collaborators and masters of language, Don Watson, Patrick Cook and Guy Rundle.

Gillies describes our recent political history as suffering an extended period of leadership deficit that is epitomised by our current leader, Tony Abbott, with his three-word slogans and political gaffes.

Gillies’ targets include a chronological, fools’ gallery of larger-than-life government leaders, starting with Robert Menzies with his beetle-like eyebrows and the ludicrously big-eared and babbling Billy McMahon.

He moves to Gough Whitlam with his resonant voice and smug attitude, Andrew Peacock’s orange tan and Malcolm Fraser’s awkwardness and patrician tones.

There are also detours to a clown-like Ronald Reagan, supercilious Maggie Thatcher and the Queen, in her 300-room, ivory tower.

Revisiting a flash of brilliance, Gillies ends with his depiction of a seemingly bumbling John Howard wearing a dressing gown and seated in a 1950s lounge room, exemplifying backward thinking government.

“Take a step forward into the past,” say the lyrics of the folksy song we hear, but Gillies’ satire reminds us that leaders should be taking us boldly into the future with integrity, passion and honesty. 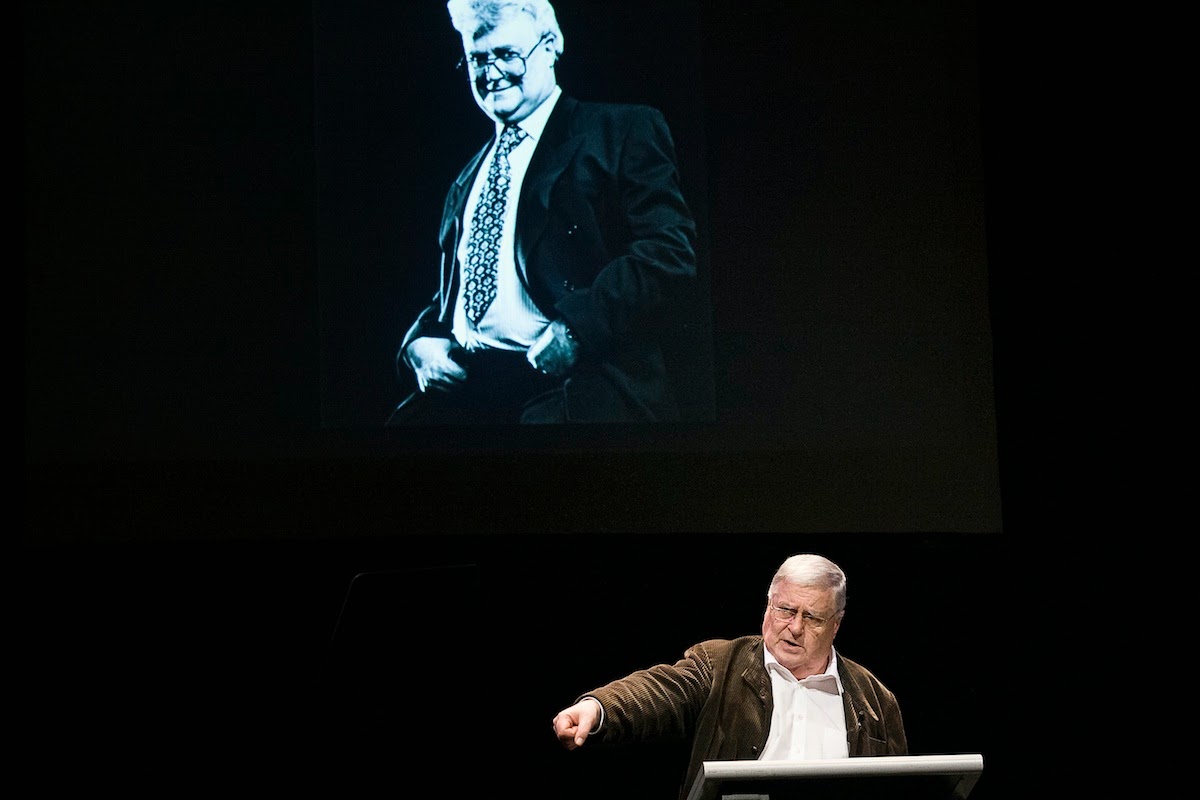 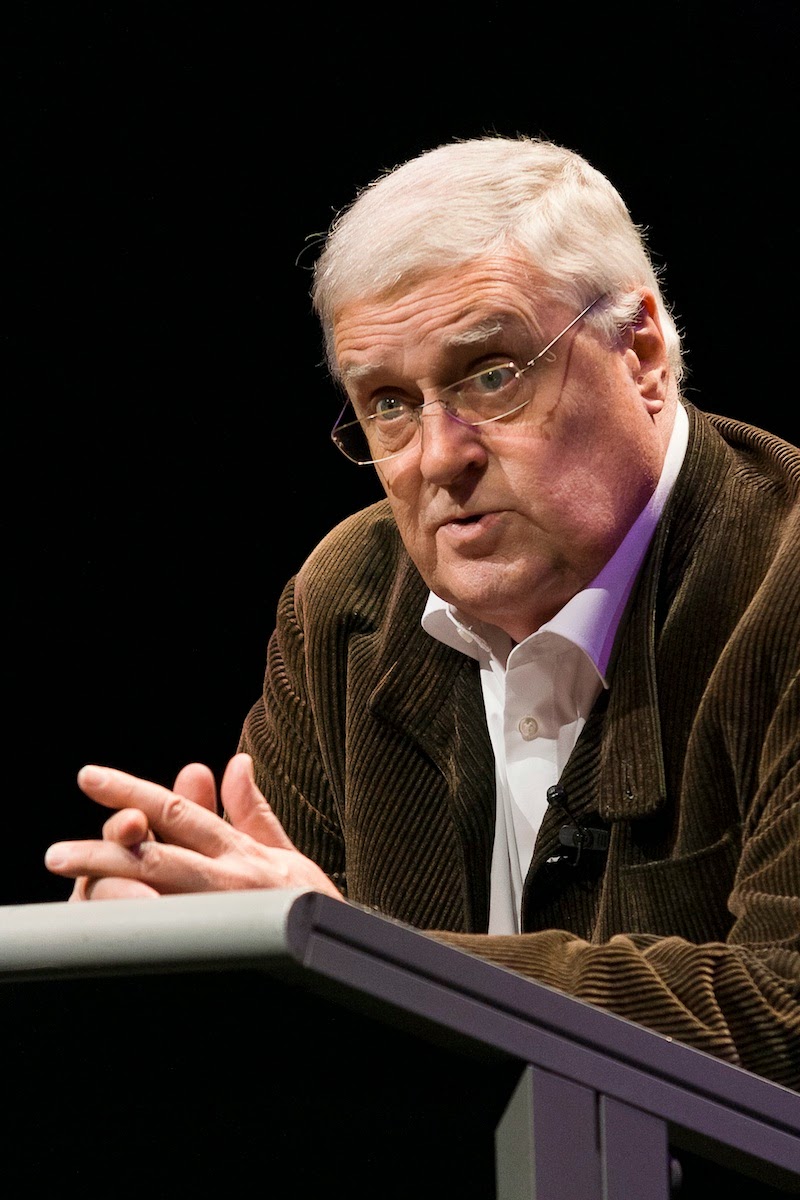 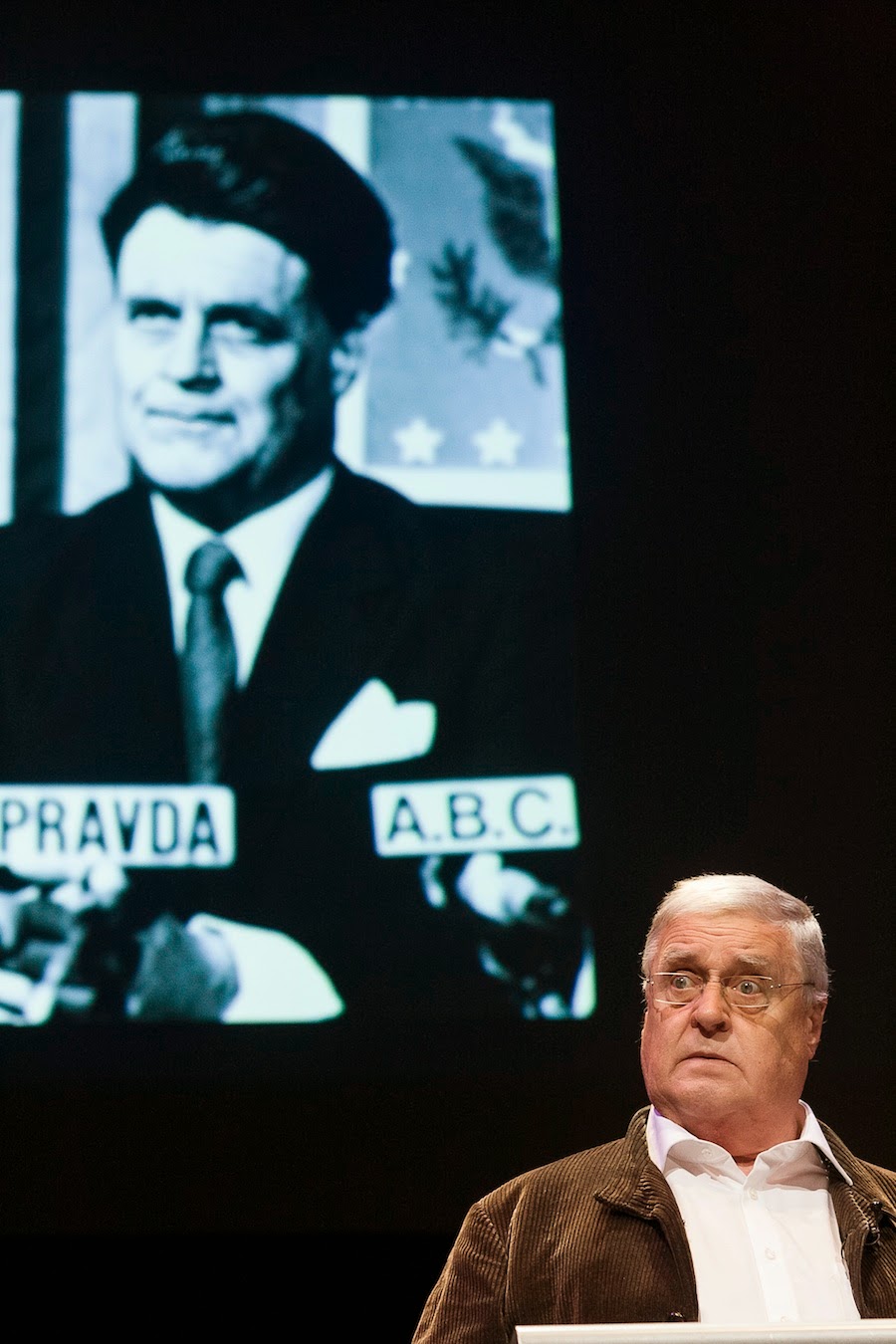 Posted by Kate Herbert at 12:15 No comments: 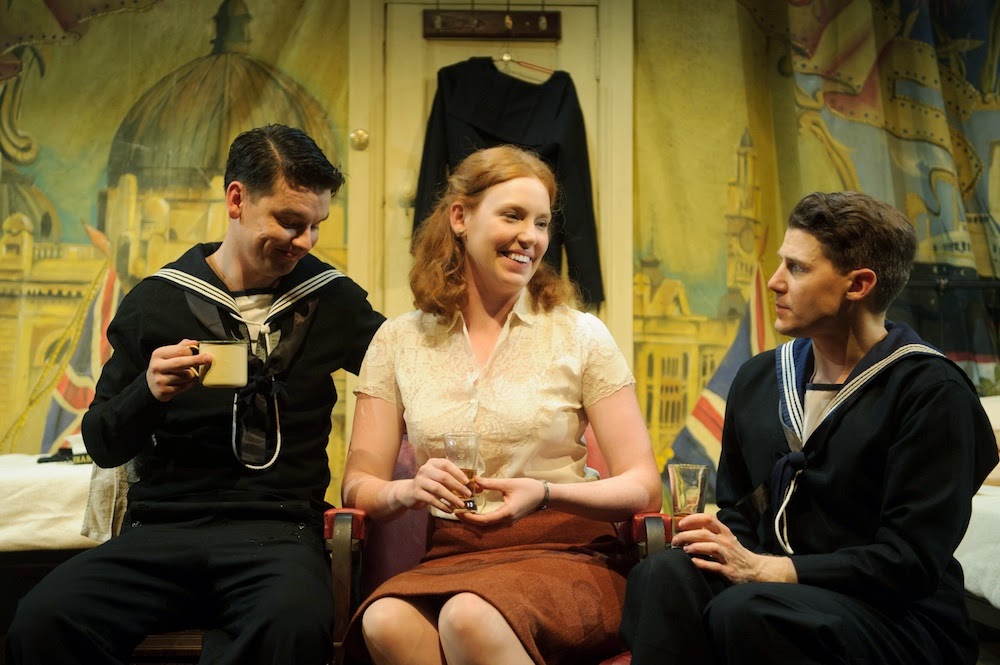 Jacob Machin, Gabrielle Scawthorn, Charlie Cousins
Sitting at old-fashioned tables in fortyfivedownstairs while peering up at the sensual, famously nude portrait of Chloe transports us back to Young and Jackson’s pub in 1940s Melbourne.

Reid’s script is gently entertaining, albeit predictable with a rather contrived ending but, with Wayne Harrison’s direction, it effectively conjures the war period with 1940s music, clothing and quirky, Aussie and Navy slang.

The flexible, in-the-round performing space (design by Dann Barber, Michael Hill) merges with the audience seating, allowing actors to move amongst the tables to get close up and personal with the crowd.
Read more »
Posted by Kate Herbert at 11:21 No comments: