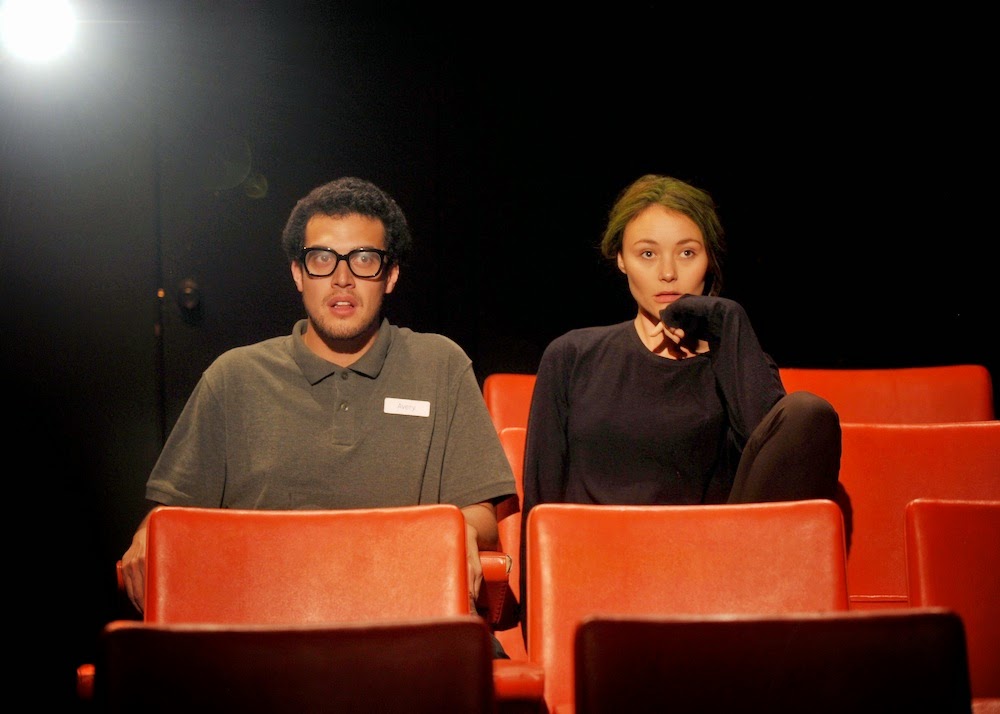 In her Pulitzer Prize winning play, The Flick, Annie Baker’s cunningly wrought dialogue crackles with wit and illuminates characters and relationships in a surprising series of vignettes.

With assured directed by Nadia Tass, The Flick is a fly-on-the-wall view of three cleaners working in a shabby, old Massachusetts cinema that is one of the last to swap its 35mm film projector for fully digital movies.

The entire 3 hours is set amongst the scruffy, empty seats of the fleapit movie house where Sam (Ben Prendergast) trains new boy, Avery (Kevin Hofbauer), in the niceties of sweeping up spilled popcorn, lolly wrappers and some scarily unidentifiable and unsavoury jetsam.

Meanwhile, Rose (Ngaire Dawn Fair), the stroppy projectionist, ventures out from behind the glass wall of the projection room only to taunt the two young men who are her puppets.

Initially, the three are cool and remote in their communication, struggling to find common ground and appearing to be two-dimensional stereotypes, even to each other.

The beauty of Baker’s script is that, just when it seems to be going nowhere, like its characters, the relationships intensify and Sam, Avery and Rose share their dreams, secrets and wounds, becoming friends rather than merely co-workers. 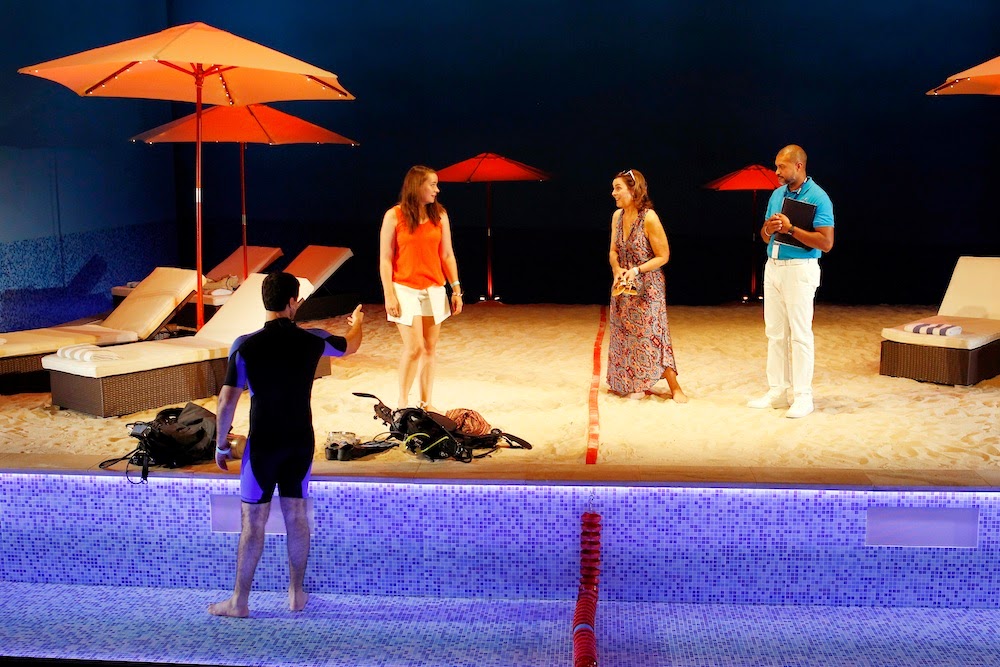 Time becomes elastic and tropical days merge into each other for the characters on an island resort in Lally Katz’ enjoyable, light comedy, Timeshare.

Its greatest strength is the versatile cast (Marg Downey, Brigid Gallacher, Bert LaBonté, Fayssal Bazzi), and all four balance the hilarious aspects of their characters with poignant moments.

While they await the late arrival of her son, Gary (Bazzi), Sandy relaxes on a lounger by the empty infinity pool and Kristy books every one of the all-inclusive activities so she can spend time with sexy, resort worker, Juan Fernando (Bazzi).

On an island that straddles the dateline, time is confusing when one side of the resort is experiencing today while the other is still in yesterday, and this is perhaps most bewildering for Sandy.
Read more »
Posted by Kate Herbert at 10:57 No comments: 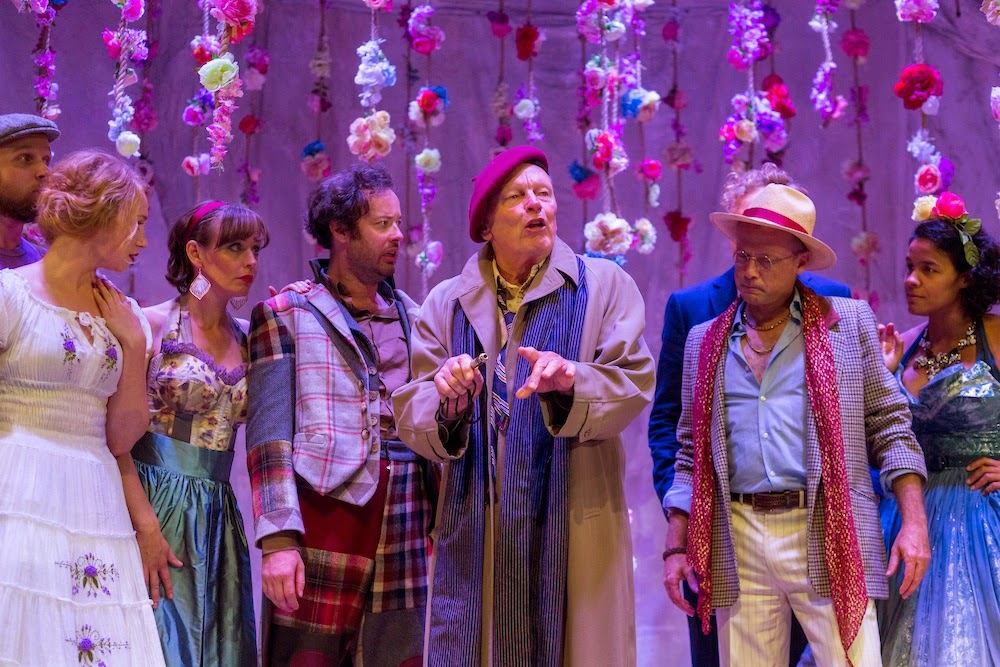 This charming production of Shakespeare’s romantic comedy, As You Like It, playfully emphasises the silliness of love and lovers and the oddly predictable changeability of human nature.

Peter Evans directs the play imaginatively with a nod to the ridiculousness of its story, the absurdity of its characters and the mischievousness of Shakespeare’s witty and bawdy dialogue.

After being banished from her jealous uncle’s court, as was her father, Duke Senior (Alan Dukes), before her, Rosalind (Zahra Newman) disguises herself as a youth and escapes with her loyal cousin, Celia (Kelly Paterniti), and the lascivious jester, Touchstone (Gareth Davies).

In the Forest of Arden, they encounter Silvius (George Banders), a lovelorn shepherd, his beloved Phebe (Emily Eskell), and, eventually, they find Rosalind’s father and his band of lords.

Meanwhile, Orlando (Charlie Garber), dispossessed by his greedy brother, Oliver (Dorje Swallow), and overwhelmed by his idiotic love, pursues Rosalind to the Forest where he pens appallingly bad, romantic verses about her and pins them to trees.

Orlando meets Rosalind in her guise as the boy, Ganymede, and she impishly proposes to teach him the ways of love, its pitfalls and the foibles of fickle women.

Newman brings passion, wit and muscularity to the role of Rosalind, the most fully developed character in the play.

Rosalind is intelligent, independent of thought, loving and chaste, but her composure is disrupted when she falls in love with young Orlando.

The willowy Garber gives Orlando a boyish callowness offset by his intemperate rage and self-indulgent romanticism, but the requisite sexual chemistry is lacking between Rosalind and Orlando until the final scenes.

Outgoing Artistic Director of Bell Shakespeare, John Bell, is exceptional as Jaques, the melancholy lord, and he delivers with elegant simplicity and a distinctive lack of flourish one of Shakespeare’s most famous speeches: The Seven Ages of Man.
Read more »
Posted by Kate Herbert at 11:45 No comments: 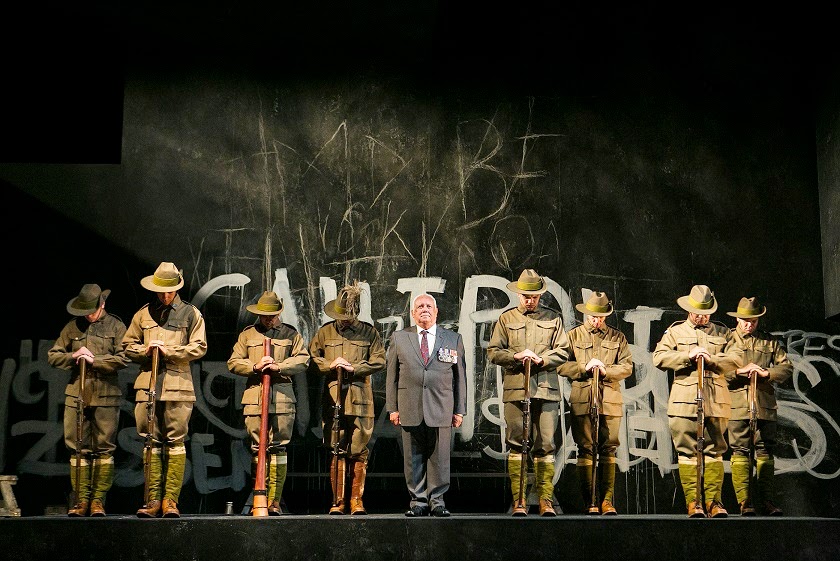 The horrors of war, the pain of prejudice and the solace of mateship combine in Black Diggers, Tom Wright’s play about the 1300 unsung, aboriginal soldiers that fought for Australia during World War One.

Wright’s script does not focus on a single narrative or any one character’s story but is, instead, episodic, with 60 short scenes that move swiftly in Wesley Enoch’s production.

Wright based his research on the many and varied stories of young, indigenous men who volunteered for service, despite not being recognised as citizens of their own country at that time.

Although the acting is uneven, these nine actors (Eliah Watego, George Bostock, Tibian Wyles, Colin Smith, Shaka Cook, Kirk Page, Guy Simon, Luke Carroll, Trevor Jamieson) tell the soldiers’ stories with commitment and care, honouring their memory, although the contribution of those veterans is not documented formally in our history books.

The play divides into five periods, including the years before Federation, Enlistment, The Theatre Of War on the Western Front, Turkey and Palestine, the Return to Australia and the Legacy of the war. 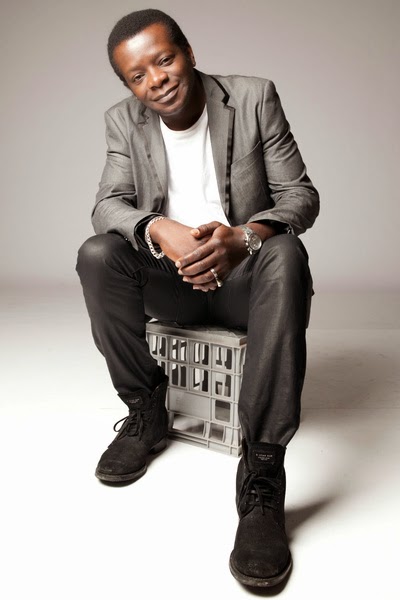 UK comedian, Stephen K. Amos, is a regular and popular visitor to the Melbourne Comedy Festival and he pulls a large crowd of loyal followers.

Amos's warmth, energy and relaxed style are his greatest assets in his stand-up show, Welcome To My World, along with his rapid, ad-libbed repartee with the audience and his ability to turn a mistake into a joke.

His interactions with individuals who foolishly sit in the front rows, produce his biggest laughs, particularly his teasing of 20-year old Daniel, who suffers repeated quips about his safari in Kenya and his business degree.

He also gets comedy mileage from some latecomers that hail from Liverpool, a town that Amos clearly judges to be joke-worthy.

His material shifts between familiar, observational humour and inoffensive political or social commentary about Australia. 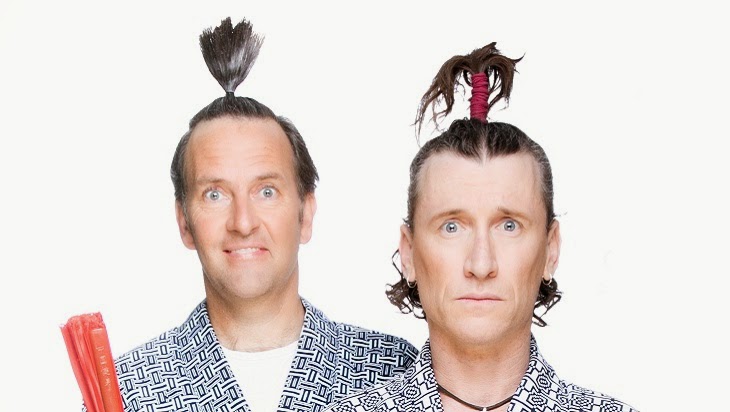 Mash up Gilbert and Sullivan's The Mikado with some hilarious slapstick, goofy characters, hammy acting and delicious harmonies and you have The 3 Mikados.

Directed deftly by Russell Fletcher, this totally bonkers re-imagining of G & S's popular comic opera from 1885 is a treat for so many reasons.

The show is the brainchild of two heroes of the Australian comedy scene, Colin Lane (Lano and Woodley) and David Collins (Umbilical Brothers), who bring their formidable physical and verbal comedy skills to the stage.

Lane and Collins can sing too and are joined by musical theatre star, Esther Hannaford (King Kong) with her exceptional voice, and the inimitable John Thorn on piano.

In this version of The Mikado, the three performers play multiple roles, a theatrical device that creates mirth and mayhem when all characters are on stage at once and the trio must switch characters in the flap of a fan.