By Harold Pinter, Melbourne Theatre Company
Aug 29 to Oct 3, 2015, Southbank Sumner Theatre
I've not reviewed this yet. Will try to do so next week, if possible. K8 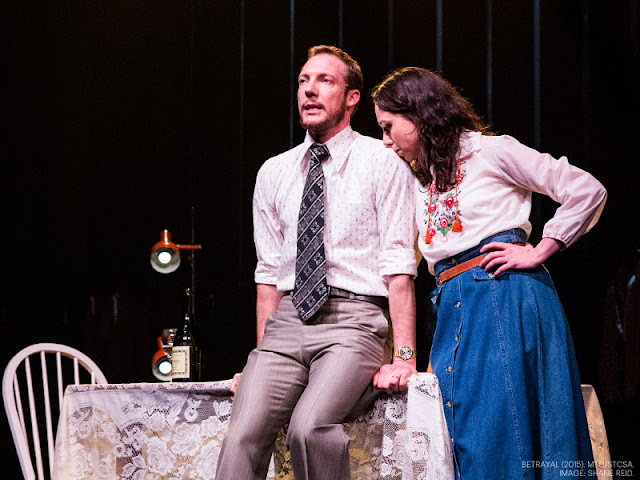 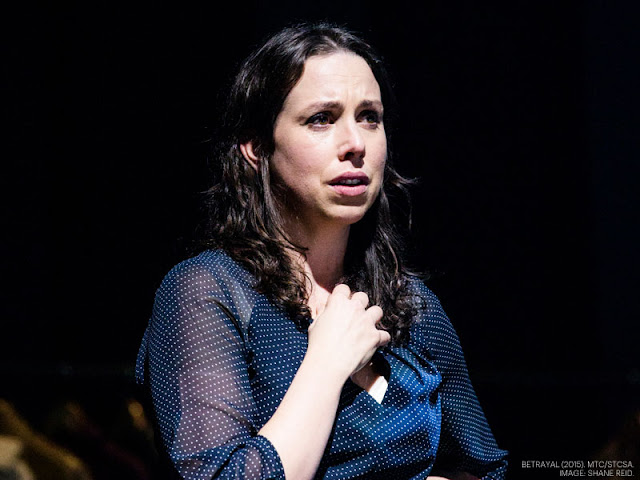 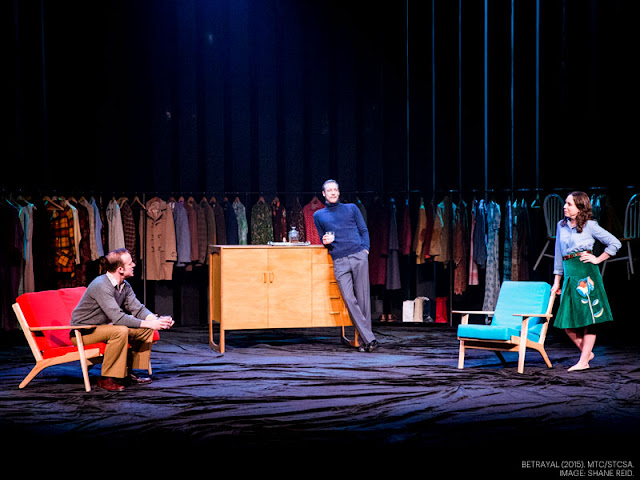 Posted by Kate Herbert at 19:02 No comments:

Sorry for my absence from the blog recently, but...

Sorry for my absence from the blog recently, but I haven't reviewed anything this week. I hope to see Betrayal at a later date.

I have been busy celebrating. For those who don't know from my Facebook, I am now the Victorian VET (Vocational) Teacher of the Year 2015.  Yes. Really!  The Awards ceremony was on Friday 28 August in a very fancy-schmancy event at Crown Palladium.

No, I didn't spend the prize money at the Black Jack table after the Award. 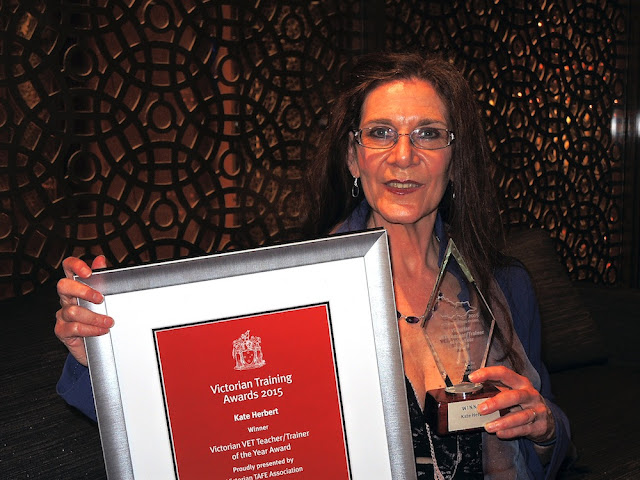 I know. My face is shinier than the trophy.

It really never occurred to me that I could win an award for all those decades of teaching Theatre and Writing.

On 19 November, I represent Victoria in the Australian VET Teacher of the Year 2015.

How about them apples?

Now I just need to write or direct a new play and get an award for that. Just saying.

A tiny snippet of video showing the moment of the Award, the fanfare and my brief acceptance comment is is on my Facebook page here:
https://www.facebook.com/kate.herbert.50 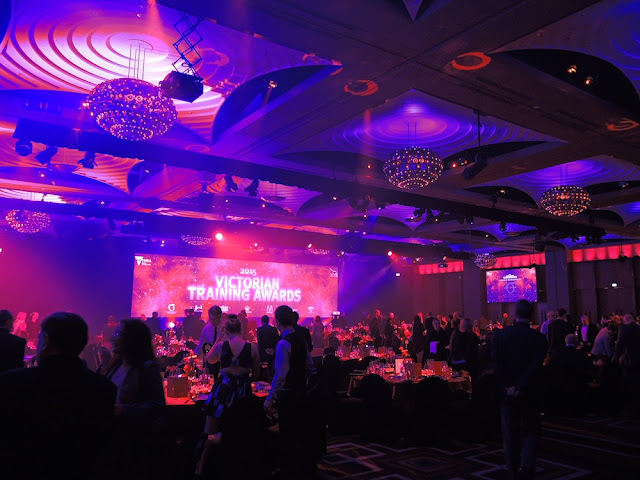 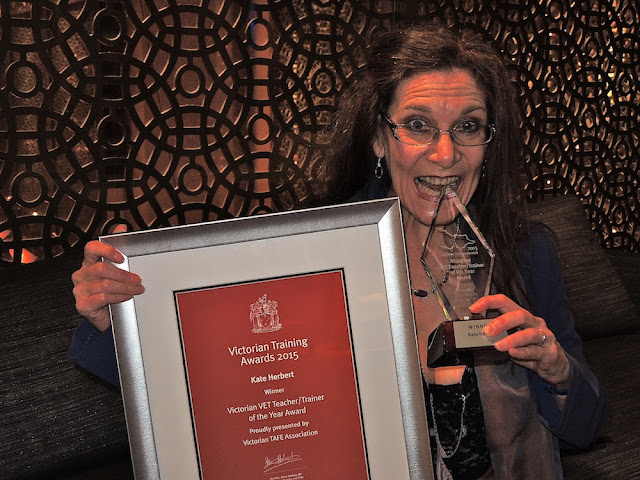 By Sophocles, adapted by Jane Montgomery Griffiths
Matlhouse Theatre, 25 Aug to  13 Sept 2015
I'm afraid I am unlikely to review or even see this Antigone. K8 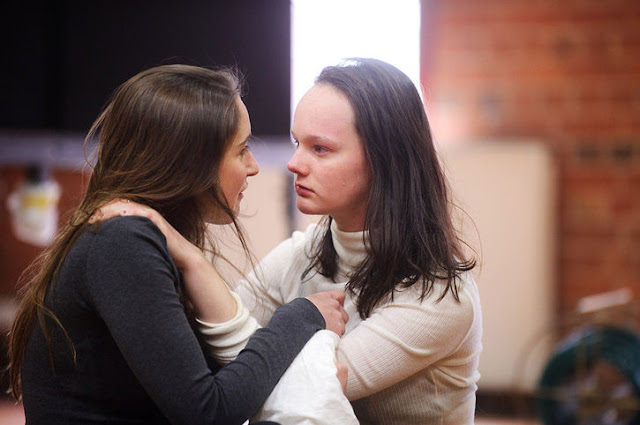 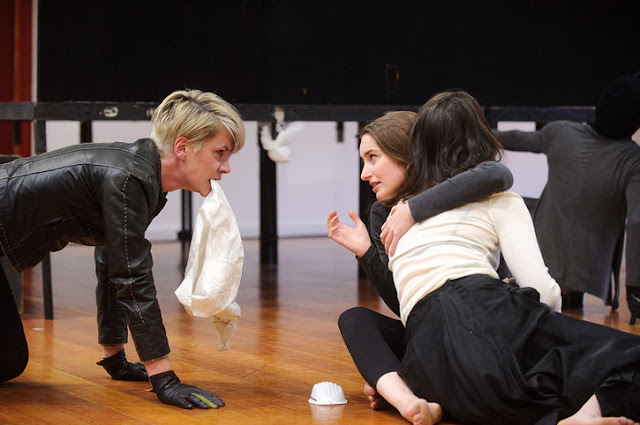 From Media Release:
'...unearths the power of ritual in a shattered community.

'Antigone / has always been a respected member of her community but in civil war all bets are off. She suddenly finds herself on the outside looking in. 'Everyone has a right to bury their dead. Everyone has a right to give their loved ones a dignified resting place. Yet when the community leaders decide that they need to set an example, they deny Antigone her right to mourn. Faced with the prospect of unresolved grief, she rebels against everything she knows. Her fate is mandated: either fall in line or be outcast forever.
'Starring Emily Milledge, Adena Jacobs’ intoxicating re-interpretation of Sophocles’ timeless tragedy isn’t afraid to get its hands dirty as it / unearths the power of ritual in a shattered community.'

Posted by Kate Herbert at 19:07 No comments: 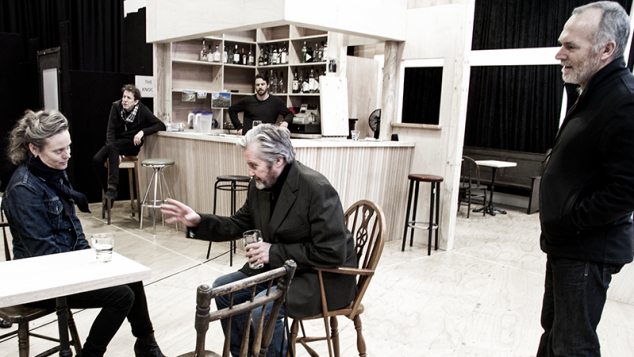 It is the richly drawn characters with their barely masked fears and flaws that drive both drama and comedy in The Weir by Irish playwright, Conor McPherson.

In a pub in a village in the West of Ireland, four local men (Peter Kowitz, Ian Meadows, Robert Menzies, Greg Stone) consume volumes of stout and whisky chasers while they amuse a welcome female newcomer (Nadine Garner) with slightly spooky stories about fairies and ghosts.

The mere arrival of this young and good-looking stranger sparks an evening that travels from local gossip to deeper themes, expressions of fear, death and longing for a life not lived.

All the characters are flawed, frightened or damaged in various ways, and all are floundering around looking for direction in their isolated lives.

These men that live in a time capsule and an emotional limbo have rarely, if ever, examined their lives so when they do reflect, these cheerful, boozing pub blokes feel their worlds unravel.

Sam Strong’s production is delightfully gentle, funny and moving and he gives his consummate cast the freedom to create these eccentric characters and their relationships.

Kowitz is compelling as Jack, the bolshy mechanic, and he maintains our sympathy as he balances on the edge of boozy belligerence and yearning for love and a past unfulfilled.

Menzies brings a nervy and unnerving awkwardness to poor Jim, who pours back pints and chasers as he jitters on his bar stool waiting for his opportunity to interject. His ghostly story about a funeral is chilling.

Stone gives a detailed, nuanced performance as hail-fellow-well-met, Finbar Mack, the chap who managed to leave the tiny village but shivers in his boots when confronted with anything deeper than his glass of stout.

As the young, obliging pub owner, Brendan, Meadows is warm and sympathetic but Brendan remains a psychological mystery to us, perhaps because he has yet to choose and lose his path in life.

Garner, as Valerie, bides her time until, lubricated by a little wine, she reveals her grim secret that drove her from Dublin to seek refuge in this secluded place.

Dale Ferguson’s realistic design replicates the rural, parochial charm of an Irish pub but its apparent order and safety hide dark corners and mysterious doors to a forbidding outside world.

This is an accomplished production that will stay with you not only because of its skillful writing and acting, but also because of its humour, humanity and bold willingness to explore the primitive fears that lurk within us all. 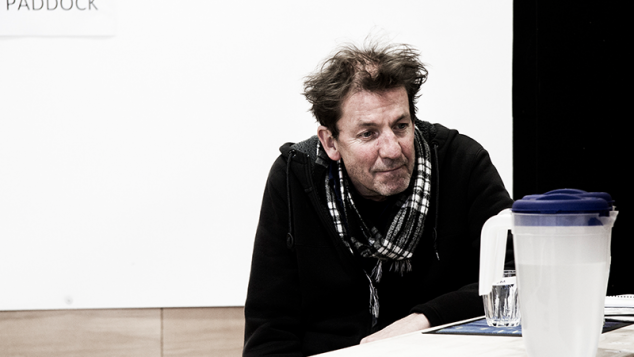 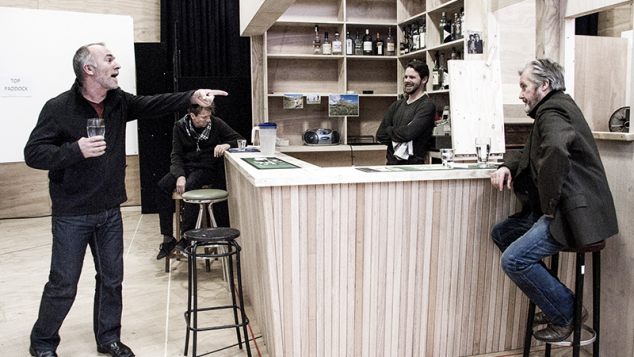 Posted by Kate Herbert at 12:00 No comments: 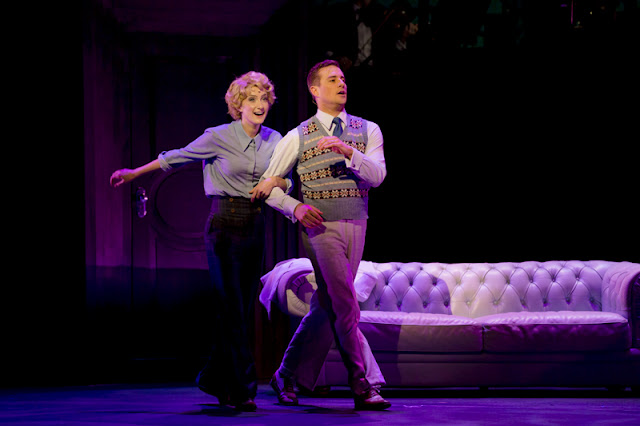 Blend a catalogue of inimitable, early 20th century Gershwin songs with a 21st century book, 1920s bootleggers, playboys and chorus girls and you get the effervescent, new musical, Nice Work if You Can Get It.

After over a decade of development, American writer, Joe DiPietro’s hybrid opened on Broadway in 2012 and won multiple Awards.

In a story set during 1927 in a playboy’s mansion on Long Island, DiPietro captures the flavour and characters of the Prohibition era but modernises them with saucy contemporary gags, bold women and ditzy men.

Nice Work is a hit that successfully straddles two centuries.

Rohan Browne balances sensuality with dim-wittedness as playboy, Jimmy Winter, who is blessed with wealth and good looks but not brains.

Jimmy’s honeymoon goes off the rails when he meets tomboy bootlegger and fugitive from justice, Billie Bendix, played with charming naiveté and gangling awkwardness by Esther Hannaford.

Roger Hodgman’s production gives the performers their heads, never getting in the way of audacious characterisations by his cast of consummate musical and comic artists.

The Gershwins’ music is the star of the show with such unforgettable, singable hits as: Nice Work If You Can Get It, Let’s Call The Whole Thing Off, Someone To Watch Over Me, ‘S Wonderful, Fascinating Rhythm and even an orchestral version of Lady Be Good.

Under musical director, John Foreman, the slick band plays Gershwin with fierce commitment and plenty of brass and percussion.

With such a vivacious cast and chorus there are many highlights, but Whelan Browne’s sassy, narcissistic rendition of Delishious, sung in her bubble bath with a chorus line of bubble girls, is spectacularly funny.

Browne’s opening scene of Sweet And Lowdown with the Speakeasy chorus features some of Dana Jolly’s exuberant, provocative choreography that also sparkles in Fascinating Rhythm.

George Kapiniaris is a classic 20s clown as bootlegging gangster, Cookie McGee, and his duet with Gina Riley as prohibitionist-turned-boozer, Duchess Estonia Dulworth, is a comic gift.

With her fine voice, Hannaford brings new life to the evocative ballad, Someone To Watch Over Me, singing it with a shotgun in hand, and to Let’s Call The Whole Thing Off, her trio with Browne and Tony Farrell as Police Chief Berry.

Blah, Blah, Blah is a delightfully eccentric love duet between Jensen Overend as the dopey Duke, and Monica Swayne as Jeannie, his equally dim girlfriend.

Nice Work is impudent, boisterous, beautifully sung and performed and allows us to hear Gershwin tunes in this new and cunningly wrought musical. 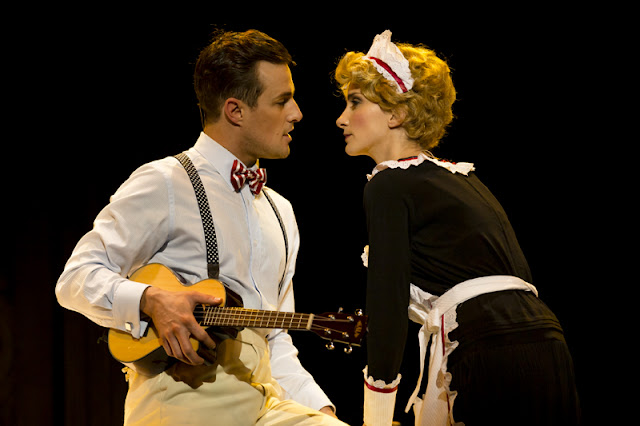 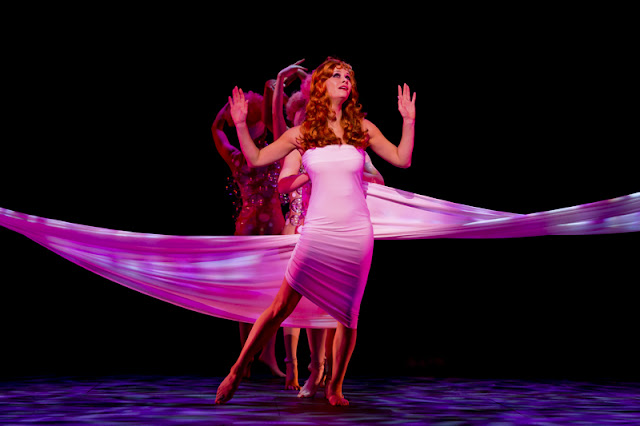 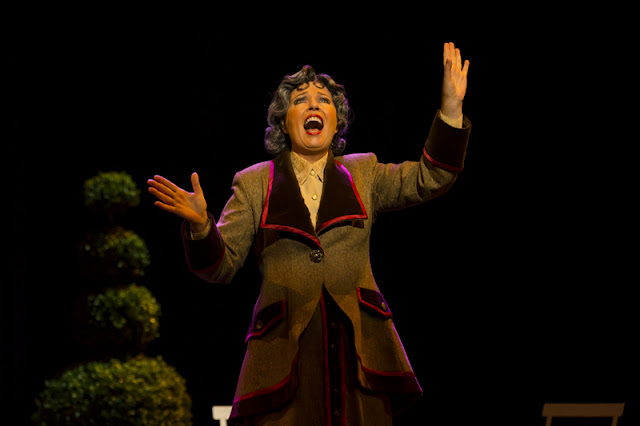 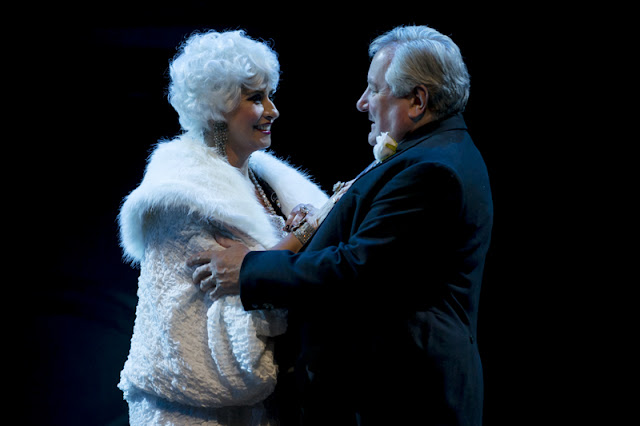 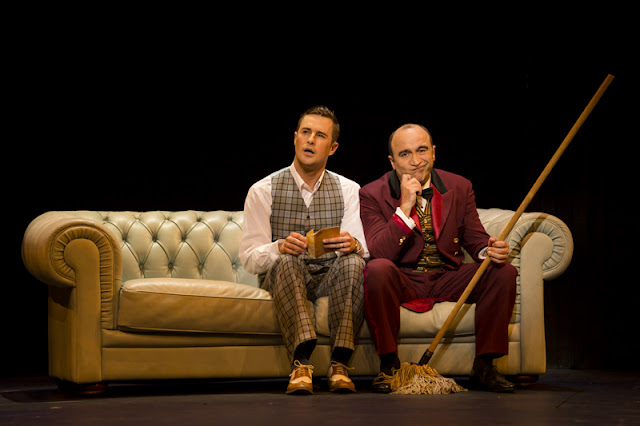 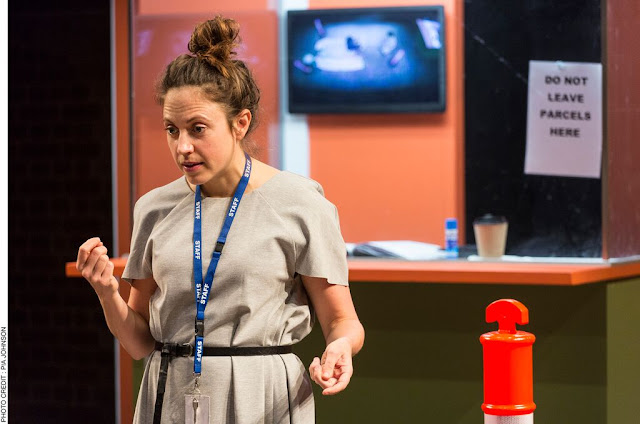 There are so many things to recommend this intimate, deceptively simple production created and performed by two of my favourite theatre artists, Nicola Gunn and David Woods.

It’s not often that a theatre piece is funny, moving, thought provoking and a political call to action, but A Social Service is all of those things.

Gunn and Woods turn their inimitable and searing satirical gaze on the idiotic arenas of public art, government bureaucracy and real estate development in this diverting, one-hour show.

In a volley of impenetrable, artsy jargon, Nicola begins her community consultation with zero sensitivity to the needs, lives or problems of current residents (Shaan Juma), believing that her proposed art project will not only elevate their minds but overcome their poverty.

Arrogant, do I hear you say? It gets better – or worse depending on your perspective.

On opening night, Juma played a young resident of the estate who is the mild voice of reason expressing residents’ views, but other members of the real residential community that contributed to Gunn’s research will play this role during the season.

Working from a script and prompted intermittently by Gunn, Juma sits quietly on a central bench, observing the escalation of volatile debate between Nicola, John and Rory (Woods), the uproariously combative, Northern Irish president of the Residents’ Committee.

Oily John wants to convert flats into artists’ studios, gentrify the estate and use Nicola’s art work to launch his Future Plan, while Nicola wants to use (Yes, use) residents in her ‘socially engaged practice’ that will improve their ‘culturally poor’ lives.

Why? queries Juma. Why indeed. Juma is already running a gentle, inclusive and successful art activity called the Longevity Project that involves a lot of mosaic tiles.

Nothing gets done – except some quietly meditative tiling – and we presume that nobody benefits except John’s developers.

This piece surreptitiously challenges the status quo, compels vigorous, post-show discussion and entertains in that eccentric and idiosyncratic way that only Gunn and Woods can do. 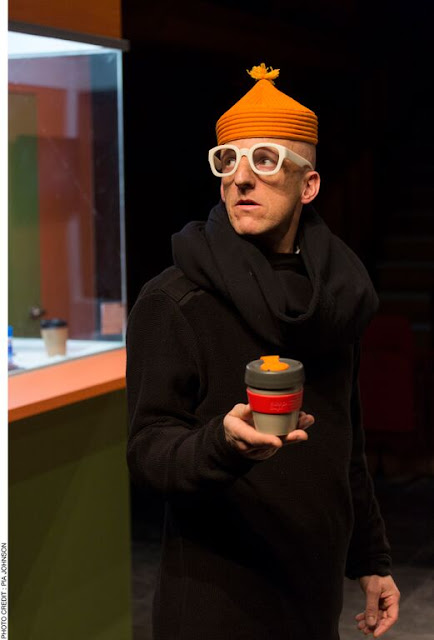 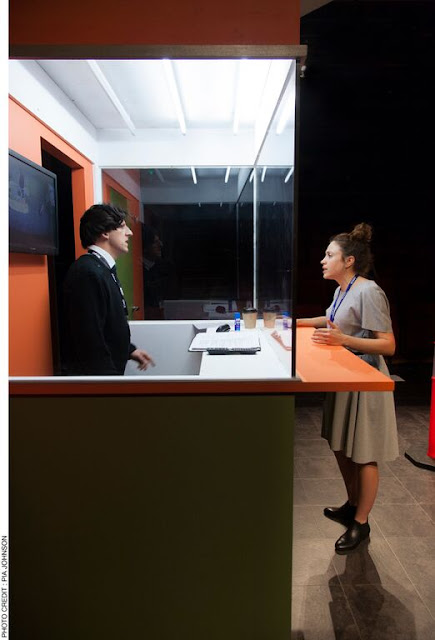 From Media Release (for now.)

A Social Service / should help people, shouldn’t it?
Featuring Nicola Gunn and David Woods, this smart performance sticks its nose into the gap between rich and poor, and smells something funny. Prepare yourself for an in-your-face look at systems that claim to help the needy, but only help themselves.
In a send-up of greed, status and the machinations of power, Gunn and Woods take a satirical look at the state of the public housing system, and the developers and bureaucrats who control its future. Featuring guest performances by residents of Melbourne's public housing estates, A Social Service questions who these safety nets are really there to benefit by digging at a reality more concerned with replicating itself than improving the situation. When the people at the top have no understanding of ordinary worries, needs or wants, maybe their help is the kind / we’d be better off without. (Malthouse MR)