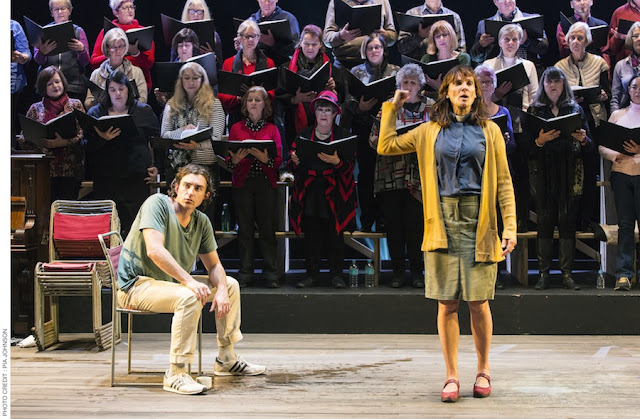 Johnny Carr & Catherine McClements & choir- photo by Pia Johnson
The horrors experienced by a small community when a demented killer invades its normally safe space to murder its members are all too topical, given the spate of mass shootings recently.

The Events, by English playwright, David Greig, depicts Claire (Catherine McClements), an Anglican minister who struggles with despair and incomprehension after her church choir suffers a mass shooting at the hands of a young man, known in the play only as The Boy (Johnny Carr).

McClements is the highlight of this production and she portrays with nuance and sensitivity Claire’s bewilderment, anxiety and disorientation as she wrestles with her own demons while trying to understand the inconceivable violence that drove The Boy to murder her congregation.

Carr depicts not only The Boy but also a range of other characters – a journalist, a right-wing politician, a counsellor, The Boy’s father and Claire’s partner, Katrina – that serve the dramatic role of assisting Claire in her quest for truth.

On opening night, THECHO!R, with musical director Jonathon Welch, features as the on stage choir that gives some sense of community and fills the stage with humanity.

With their live piano accompaniment, the choir’s hymns and other tunes provide warmth to this story that, otherwise, chills to the bone.

The intention of the play is admirable, but it lacks dramatic tension and fails to adequately penetrate or illuminate Claire’s predicament or The Boy’s story.

The dislocated, episodic structure may be intended to mirror Claire’s own inner chaos, but it ends up merely being fragmented and lacking coherence, depth and genuine emotional connection with the characters.

The production is patchy, the script is flabby and the dialogue awkward, particularly when the choir members are required to communicate with Claire and The Boy or speak in unison.

The role of the choir is confused and lacking clarity when they are not singing, at which times they sound under-rehearsed rather than authentically fresh, the latter probably being the director’s original intention.

Strangely, the script includes plenty of talk about emotions, empathy, healing, forgiveness and even revenge, but little genuine sympathy is generated for the characters, except in the final scene when Claire meets the killer.

Claire’s angst, despair and mania are resolved rather too quickly and conveniently in the last scene after her compulsive quest for the truth.

The dramatic investigation of mass shootings is an admirable aim for a new play but The Events misses its mark in too many ways.