Adapted by Toby Hulse from the book by Jules Verne, by Toby Hulse
Produced by Ellis Productions in association with Aleksandar Vass
The Alex, St. Kilda, until Sept 4, 2016
Reviewer: Kate Herbert on Aug 26
Stars:*** 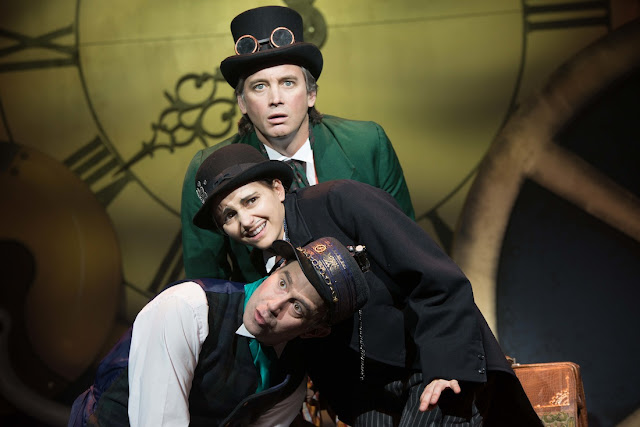 Top to Bottom-  Ian Stenlake, Pia Miranda, Grant Piro
These days, Phileas Fogg might be described as obsessive-compulsive, but in Jules Verne’s 19th century story, Around the World in 80 Days, Fogg is a gentlemanly, English adventurer with a penchant for mathematical precision in all things.

Toby Hulse’s stage adaptation of Verne’s novel, directed here by Terence O’Connell, is a spirited and diverting two-hour romp suitable for the whole family and performed by only three actors.

Ian Stenlake is dapper and haughty as the meticulous Fogg who makes a £20,000 wager with two gentlemen from the Reform Club in London, that he can circumnavigate the world in 80 days, departing at exactly 8.45pm on October 2, 1872 and returning exactly 80 days later by 8.45pm on December 21.

Fogg embarks on his journey with his loyal valet, Passepartout (Pia Miranda), and is pursued by a determined detective, Fix of Scotland Yard (Grant Piro), who believes Fogg to be an infamous bank robber because he resembles the general description of the thief, particularly his “magnificent teeth”.

With pompous self-assurance and a bag stuffed with crisp pound notes, Fogg leads Passepartout and Fix across India, China, Japan and America on a series of madcap adventures on trains, boats and elephants, escaping a typhoon and even rescuing an Indian Princess from certain death.

Piro, with his impeccable comic delivery and mastery of slapstick, is a highlight in multiple roles including the detective, Fix, who he portrays with an absurd doggedness and hilariously over-articulated accent peppered with dropped “h’s”.

With his mobile, clown face and complicity with the audience, Piro garners plenty of laughs as Fix, then in drag as the prim, Indian Princess, and intermittently as a parade of outrageous cultural stereotypes.

Miranda plays Passepartout as a pert and attentive lad, getting additional comic mileage from being compelled to rush about the cluttered stage to change costumes and switch roles in a blink.

Some of the physical comedy routines and cueing need tightening and often the funniest moments for the audience are when things seem to go wrong on stage with tumbling scenery or fast costume changes and the actors appear to be ad libbing animatedly.

The flexible, sepia-toned set (Merinda Backway) captures the 19th century period with a collection of wheels and cogs and an enormous clock-face to remind us of the days and hours ticking away.

The giggles from a nearby 10 year-old indicate that this production tickles the funny bone of a young audience and that the show is an energetic and charming entertainment for the entire family.