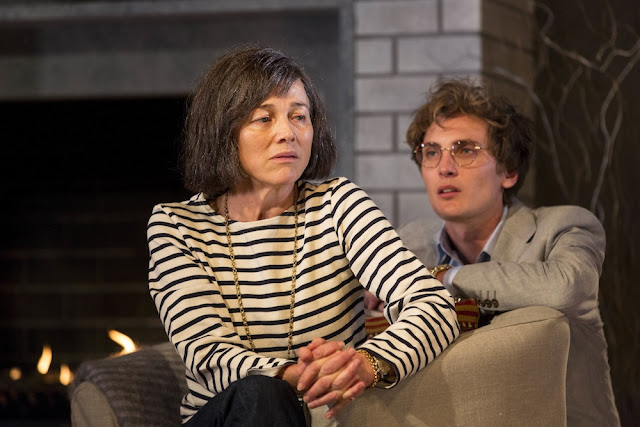 Sarah Peirse, Eamon Farren,  Photo Brett Boardman
American crime novelist, Patricia Highsmith, was as notorious for her abrasive personality, alcoholism, racist views and penny-pinching lifestyle as she was for Tom Ripley, the morally corrupt character featured in her thriller novels.

In Joanna Murray-Smith’s play, Switzerland, a young stranger, Edward (Eamon Farren), from Highsmith’s New York publisher, visits the ailing and ageing Highsmith (Sarah Peirse OK) in her isolated, Swiss villa in 1995, the year of her death.

The stage, like the world in Highsmith’s psychological thrillers, is a dangerous place and Patricia and Edward’s witty war of words barely masks an underlying sense of threat as Edward attempts to convince Patricia to sign a contract to write a final Ripley novel.

Peirse is a distinguished actor in any production and she completely inhabits the formidable Patricia with a complex physicality that captures her crippling age and illness and her fierce and ruthless demeanour.

She delivers Murray-Smith’s clipped and fast-paced dialogue with acerbic wit and a predatory gaze, making this totally dislikeable character dangerously compelling as she slices and dices her young guest with her razor tongue.

Farren’s rangy, private schoolboy looks make the nervy, nerdy Edward a perfect target for Patricia’s cruelty, effectively balancing Edward’s naive admiration with his tenacious drive to win over Patricia, while simultaneously suggesting that he may be hiding something unsavoury.

Murray-Smith’s narrative and dialogue track the grim power play between these characters who seem to be unequal but whose status relationship becomes less clear as the stakes climb higher and their boundaries shift.

Sarah Goodes’ assured direction focuses attention on their status game as the two circle each other like predator and prey, prowling the stage like caged creatures as they assault each other with barbed comments.

By the middle of the 100 minutes, the script starts to repeat itself, with the characters engaging in different, albeit witty, versions of the same argument.

However, the final twist provides a welcome change in pace and a more satisfying ending to this game of cat and mouse, although such a narrative turn is not unexpected.

Switzerland is a sharp-witted and intelligent play but its highlight is Peirse’s audacious portrayal of Patricia Highsmith. 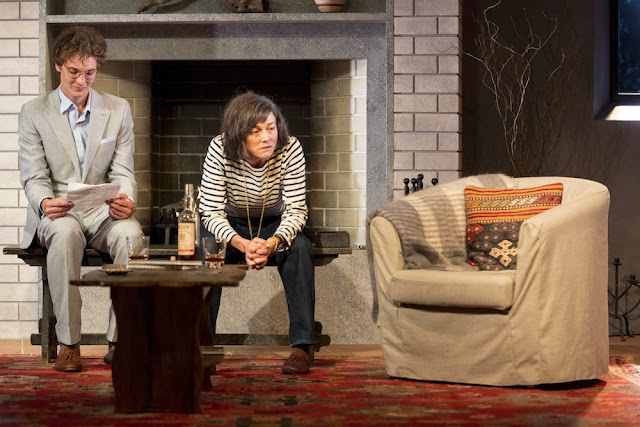