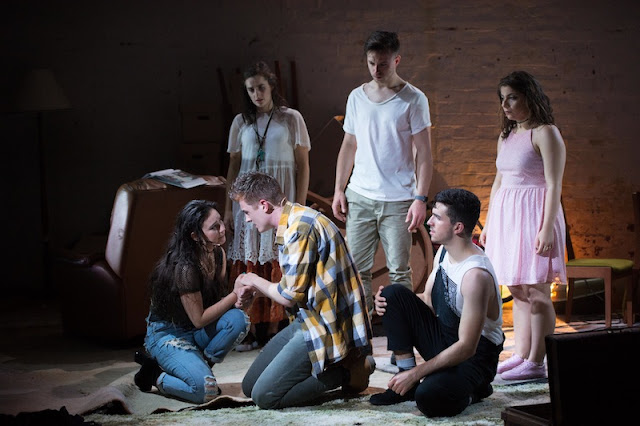 New musicals that are produced on the professional stage must necessarily be compared with more mature musical works, which means that they do not always receive glowing reviews, even when we wish them well in their development.

Hannagan and Jenkin’s music has charm and variety and is certainly the strongest element in the show, and the assured, five-piece band under musical director, Daniel Puckey, plays the score with freshness and energy.

The tunes range in style from solo ballads such as Sweet December Feelings, to rousing five-part harmonies like Between These Walls and A Different Kind of Love, and perky, musical theatre-style choruses such as You Didn’t Prepare Us For This or Never Ever.

After his unexplained, five-year absence, Tom (Joel Granger), a nervous young man in his early twenties, invites his old, school friends and his foster-sister, Kelly (Shannen Alyce Quan), to a party – the titular gathering – in the spooky, crumbling, outer suburban house that he wants them all to come and share with him.

Old conflicts and resentments surface between the friends and are complicated when the creaking and cracking of the old house suggests that it may be haunted by the previous inhabitant.

The narrative is unnecessarily complicated and not very engaging, while the dialogue is predictable, the characters are two-dimensional, juvenile and not very likable, and the relationships are under-developed.

The songs attempt to illuminate the inner life of the characters and advance the story, but the lyrics are corny, and the rhymes are laboured and sometimes excruciating.

The cast of six is strongest when singing, and Chris Parker keeps his direction simple, focussing on the tunes and harmonies that are the most effective component of the production.

Quan’s voice has a clear, bright tone in the nostalgic Sweet December Feelings, and she plays Kelly with abrasiveness mixed with vulnerability, while Granger captures Tom’s neediness and anxiety when singing Part of the Gang and Whispers in These Walls.

Hannah Sullivan McInerney play Daisy, the hippy, and has vocal strength singing the poignant Hair So Long, while Daniel Cosgrove is her blokey and aggrieved ex-boyfriend, Joe.

Daniel Assetta injects playfulness and energy as Luke, Kelly’s party-boy pal, while Olivia Charalambous provides comic relief as clumsy Mia, who admits her crush on Tom in their duet, If Ever I Would Run.

Although many of the songs have successful tunes and harmonies, The Gathering needs further development or a complete rewrite of the story, dialogue, lyrics and characters.

Songs
Between These Walls
Sweet December Feelings
Part of the Gang
Haunted
I Won’t Break
Never Ever
Whisper in these Walls
You Didn’t Prepare Us For This
Hair So Long
I Miss Us
If Ever I Would Run
A Different Kind of Love
One World
Posted by Kate Herbert at 15:00 No comments: