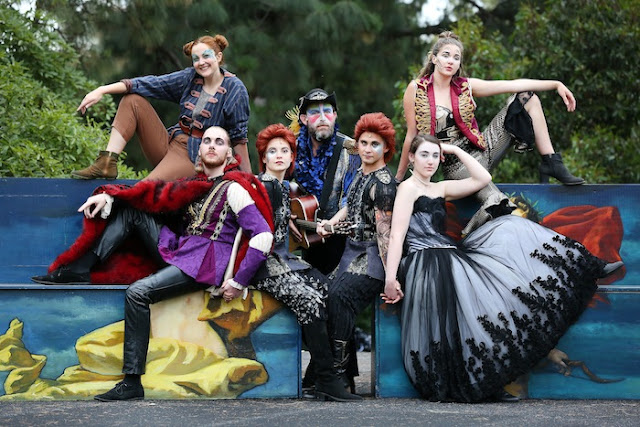 It’s difficult to beat a picnic under the stars on a balmy night in the Botanical Gardens while watching a lively and colourful production of one of Shakespeare’s romantic comedies.

For this summer season, Glenn Elston directs a vivacious cast in a cheeky version of Twelfth Night on an outdoor stage, with plenty of family-friendly slapstick, live music, Shakespearean song and a touch of philosophy, all set during the twelve days of the traditional Christmas period.

However, Elston takes some licence with Shakespeare’s dialogue and characters, peppering the show with topical gags, swapping the gender of two characters and opening the play with a merry, rewritten festive song that starts, ‘On the first day of Christmas my true love sent to me – a shipwreck on the high seas.’
After the aforementioned wreck separates Viola (Elizabeth Brennan) from her twin brother, Sebastian (James Coley), she disguises herself as Cesario, boy-servant to Duke Orsino (Charlie Sturgeon). Viola then falls in love with Orsino who adores the grieving Countess Olivia (Syd Zigier) who, in turn, falls head over heels for Cesario, the boy-girl. Get it?

The real hilarity in this production comes from the madcap antics of Kevin Hopkins as the boozing, partying, wild-haired Sir Toby Belch, and the dotty Anthony Rive as his foppish, idiotic but moneyed comrade in drunken debauchery, Sir Andrew Aguecheek.

Their clownish routine that includes ducking and diving (literally, in Rive’s case) and bobbing up and down like sideshow clown-heads, is a fine example of classic physical comedy, and Claire Nicholls as feisty Maria, and Louisa Fitzhardinge as Fabian, complete the comic quartet.

A show highlight is Mark Dickinson as Feste, Olivia’s jester, who comments on the chaotic, comic action and love triangles with glib and witty jests, riddles and songs (music by Paul Norton).

Dickinson captures Feste’s wry, melancholy wisdom and, with his rich voice, fine guitar playing and compelling presence, delivers Shakespeare’s famous songs that include a country music influenced version of O Mistress Mine and the romantic lament, Feste’s Song (‘With a hey, ho, the wind and the rain’).

Hugh Sexton is suitably pompous, sneering and posturing as Olivia’s ambitious steward, Malvolio, who is the butt of a cruel practical joke by Maria, Sir Toby and their cronies.

Elston’s effervescent, outdoor production contains all the requisite romantic and comic chaos, musical diversions, celebratory drunkenness, mischievous humour and outrageous revelry expected of the festive season – and you get to eat snacks and sip wine!

Posted by Kate Herbert at 10:10 No comments: 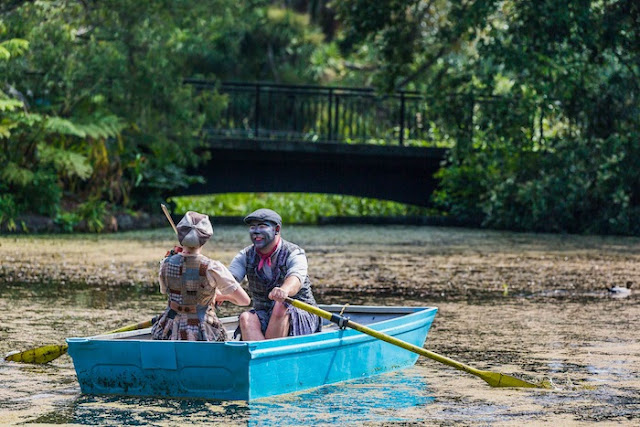 Could The Wind in the Willows be the longest running show in Melbourne? This summer marks 30 years since Glenn Elston first staged, in our Botanical Gardens, his charming adaptation of Kenneth Grahame’s 1908 children’s book.

This vivacious outdoor show is a family event not only for the audience, but for the production company too; Otis Elston, Glenn Elston’s son who played Portly Otter when a child, now directs the beguiling production. Somebody must be cloning Elstons!

Otis Elston’s production emphasises the children’s participation in this tale of mateship and adventure, and the enthusiastic kids howl at the clownish slapstick and bad jokes then go on a dangerous adventure with the Rat Pack and Badger Patrol to rescue little, lost Portly the Otter (Amon Prete) from the Wild Wood.

Their participation includes not only a rescue mission but also singing along to ‘Waggle your ears, wiggle your nose,’ joining the chorus of ‘Quack quack quackady-quack’ in the Ducks’ Ditty, and shouting warnings of ‘He’s behind you!’

Paul Morris once again provides music on mandolin and plays the hilariously sneaky, sleazy and villainous Weasel who lays siege to Toad Hall with his weaselly relatives and giant water pistols filled with ‘weasel wee’.

This year, Chris Southall takes over the role of Head Chief Rabbit who acts as host, leading the children in song, playing guitar and joining Morris to entertain the parents with wittily reworded pop songs.

Leigh Piper is playful as the sensible river-dwelling Rat who loves ‘messing about in boats’, while Andrew Hondromatidis has a fine singing voice as Otter and shows his versatility by also playing the smug Policeman who loves arresting Toad, and a doddering, old Judge.

Doru Surcel plays the pompous, long-winded Badger whose black and white make-up – according to Weasel – makes him look like a renegade from Kiss or, worse, a Collingwood supporter, while Katherine Pearson plays Mole, the obsessive cleaner, with a blend of sprightliness and timidity.

Willows is a dynamic and captivating show for littlies and biggies on a summer’s day – but hide your picnic hamper to avoid sly Weasel and hungry Head Chief Rabbit nicking your sangers and wine.

Posted by Kate Herbert at 08:00 No comments: