If hell is other people, the guests staying with the Bliss family in Noël Coward’s Hay Fever are plunged right into the inferno for an entire weekend.

When each of the Blisses, unbeknown to the other family members, invites a guest to stay the weekend, this eccentric, outwardly easy-going family reveals the extent of its ill-mannered and self-centred behaviour. The Blisses are eminently slappable.

Coward’s play is diverting flummery peppered with witticisms, gentle jibes, a little bit of 1920s sauciness and populated by a parade of silly characters.

In this frisky production directed by Lee Lewis, Prior displays her comedic skills as Judith, with histrionic gestures and ‘theatrical effects’, even singing a sultry, French love song as one of Judith’s blatant seduction techniques.

It’s a pity that Simon Gleeson, with his fine tenor, does not join Prior in a duet at the piano, but he has excellent comic timing and delivery as the poncy, stitched-up diplomat, Richard Greatham.

Davies is suitably brattish and mincing as Simon while Sage pouts and complains as Sorel and Gyngell is wry and prickly as the reclusive David.

Their guests suffer varying degrees of confusion, but Myra Arundel, played elegantly by Monica Sayers, accurately describes the Bliss house as ‘a featherbed of false emotions’.

The mad cavorting and social gaffes are reminiscent of Fawlty Towers, but the Bliss family always prevails because they are almost totally unaware of their own appalling behaviour and its impact on others. Like I said, hell is other people. 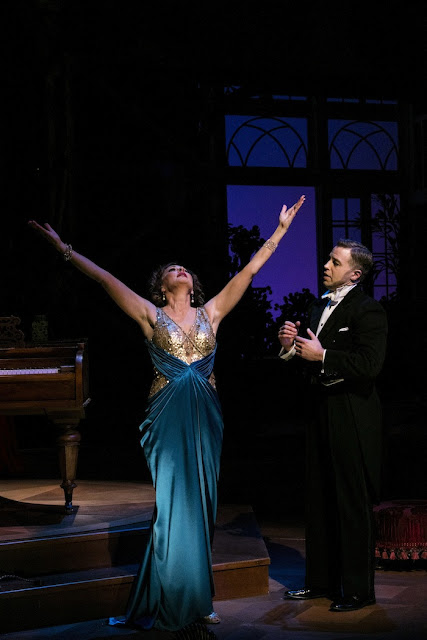 THEATRE
Written by William Shakespeare
by Pop-Up Globe (In repertory with: Henry V, Othello, Much Ado About Nothing, Around the Globe in 60 minutes!
At Pop-Up Globe, until Nov 12, 2017
Reviewer: Kate Herbert
Stars:***
Review also published in Herald Sun Arts online on Monday Sept 25, 2017, and later in print (Tues26/10). KH
Picture yourself in early 17th century London, perched on a balcony, peering down at rollicking actors on the stage of the Globe Theatre while the rowdy ‘groundlings’ – standing-room audience – cheer and guffaw at Shakespeare’s As You Like It.

At the Pop-Up Globe visiting Melbourne from New Zealand, we experience Shakespeare’s open-roofed theatre, the boisterous style of his comedies and the unruliness of the crowds who drink, shout and scoff at the drizzling rain.

However, the narrative will elude those unfamiliar with the play, and one of Shakespeare’s finest and most famous speeches (‘All the world’s a stage’) delivered by the melancholic Jaques (Stephen Papps), is obscured in the flurry of comedy.

As You Like It is a rom-com, so why not have Touchstone (Michael Mahony) the clown eat Vegemite and sing My Heart Will Go On from Titanic, or have Orlando (Adrian Hooke) filch his awful love poetry from pop songs? But please, keep the story clear!

With her cousin, Celia (Stanley Andrew Jackson III), Rosalind (Jonathan Tynan-Moss) flees her uncle, Duke Frederick’s (Stephen Butterworth) court, disguises herself as a youth, seeks refuge in the Forest of Arden and encounters her secret ‘crush’, Orlando, who pines for Rosalind but does not recognise her in disguise.

Tynan-Moss switches gleefully between girlish capering and tittering and gruff, laddish posturing, and the crowd roars at the goofiness of a man playing a woman who pretends to be a man who repels a gay shepherd’s (Jonathan Martin) advances.

Hooke’s Orlando is suitably gauche in his pursuit of Rosalind and his ludicrous love lyrics are diverting, while Mahony’s Touchstone is a comic hit, addressing the audience directly, singing and playing a mandolin, taunting and urging us to cheer and laugh.

As Celia, Jackson is saucy and entertaining, and his dance duet with James Hardy as the snobbish Oliver is a riot.

Paul English brings dignity and grace to Duke Senior, Rosalind’s exiled father, providing one of the few non-comic characters and a considered, clear delivery of the poetic dialogue.

As You Like It is not one of Shakespeare’s greatest plays and, although there are glimpses of his exceptional language, this production emphasises physical comedy over poetry.

Posted by Kate Herbert at 08:26 No comments:

Review also published in Herald Sun Art online on Thurs Sept 21, 2017, and later in print. This show is an early opener for the 2017 Melbourne Festival. KH
Meow Meow is captivating as the seductive devil, Pegleg, stealing the stage in Tom Waits’ and William S. Burroughs’ eccentric music theatre work, Black Rider: The Casting of the Magic Bullets.

American director, Robert Wilson based his 1990 production on the German folktale, The Fatal Marksman, about a young clerk (Kanen Breen) who falls in love with a hunter’s daughter (Dimity Shepherd) whose father (Richard Piper) demands the young man be a crack marksman.

The clerk makes a pact with the devil who guarantees the magic bullets will always hit their target, but it all goes terribly wrong when the final bullet hits his bride.

Waits’ music quirkily merges opera with German cabaret and vaudeville then veers into gospel, jazz and rock influences, all played with zest by the Victorian Opera Chamber Orchestra led by Phoebe Briggs.

As Pegleg, Meow Meow is sultry and sexy while also being demented, dangerous and despairing as she prowls the stage, perches atop a soaring white wall, reaches clawing arms through crannies and sings raunchy or vengeful German cabaret songs.

Breen is a fine singer playing the young huntsman, a tough role that challenges his voice and contorts his body when the tormented youth collapses into madness.

Shepherd has a rich, poignant voice and a highlight is her lament, I’ll Shoot the Moon, as the young bride writhes on her chair waiting for her love to return.

This daring production of Black Rider has some fine performances, eclectic music and compelling imagery although at times its style overwhelms the content.

Posted by Kate Herbert at 17:03 No comments: 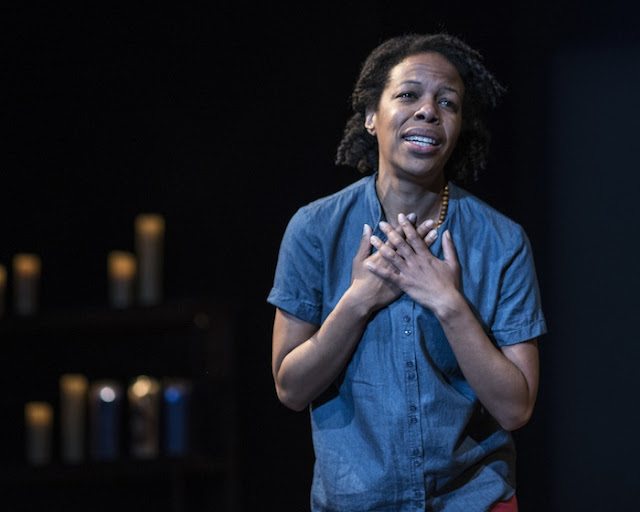 Evelyn, a former Transit Authority worker, now studies ‘energy healing’ in a valiant effort to heal her severely disabled daughter, Candace/Candy, who is immobilised and cannot breathe without a respirator.

Sun combines bold comedy with incisive social observation, empathy and her signature open hearted, engaging style, and we forget that one person plays every role as Sun transports us to Pike St. with rapid dialogue and deft changes of voice, physicality and attitude.

With impeccable technique and split-second timing, Sun transforms from able-bodied Evelyn to the crooked body of Candy, then to Manny, Evelyn’s muscular but war-damaged brother.

A comic highlight is Evelyn’s saucy but stiff-limbed father, Poppy, but his audacity is tempered by grief and humiliation stemming from his Vietnam War service.

Visitors to Evelyn’s apartment include ancient Mrs. Appelbaum whose memory fluctuates, seductive and selfish Migdalia, Poppy’s latest flame, and Manny’s old pal, Tykeen, who prattles and skips as he tempts the clean-living Manny with dope, caffeine and fast food.

Separate from, but intrinsic to the story is Lola, Evelyn’s late mother who was a renowned healer and who cheerfully leads the audience in ritualistic breathing techniques that expel sickness and ill-feeling – and, yes, we really feel better!

The rhythm and pace are frantic as the family members race to storm-proof their world, but one has the impression that their lives are always teetering on the brink of disaster, even without the storm.

This comedy-tragedy is surprising, compelling and moving – but the tragedy is not where we expect it in Pike St. 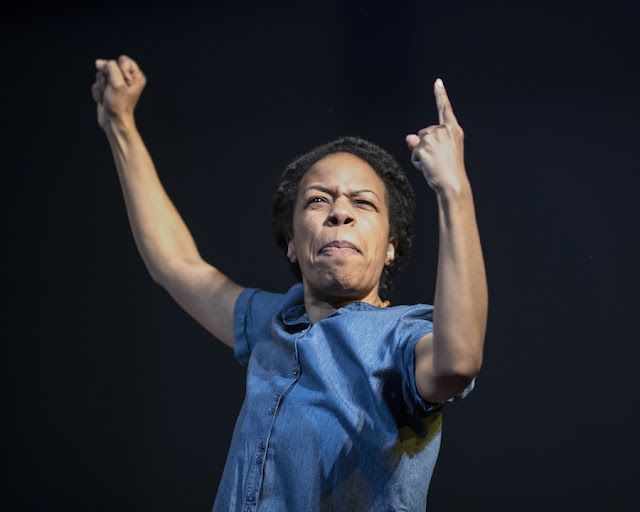 Nilaja Sun
Posted by Kate Herbert at 17:30 No comments:

Written by Brigitte Burton, by Baggage Productions
At Chapel off Chapel, until Sept 16, 2017
Reviewer: Kate Herbert
Stars: **
Review also published in Herald Sun Arts in print only, I believe. KH


Anno Zombie resembles the cult, zombie-horror series, The Walking Dead, but with added jokes and a backing track by Wham!

The play, directed by Natasha Broadstock, is billed as a ‘zom-com’, and Bridgette Burton’s premise has promise as a quirky monster-comedy-romance that could potentially follow the style of The Rocky Horror Show and Little Shop of Horrors.

There are certainly some laughs during the 100 minutes, with many generated by the effusively camp 17-year old, Lee (Taylor Smith-Morvell), who has a penchant for Wham! tunes and garish outfits from the men’s clothing department – and the women’s.

The remaining comic characters include Harl (Glenn van Oosterom), the hipster poser with his beard, man-bun and ethically sourced coffee, and Lizzie (Tiffany Davis), the glamorous but shallow personal shopper with whom Harl hope to repopulate the planet.

Dan Walls does plenty of comical commando rolls as Ray, the former loans broker who’s found his mojo as a gun-totin’ zombie killer, while his wife, Philly (Lauren Bailey), is a guilt-ridden geneticist, and everyone avoids the drooling, brain-chomping zombie, ‘The Undude’ (Matthew Dorning).

Despite its laughs and light-hearted goofiness, the production is shambolic, the script too long with repetitive dialogue, the acting uneven, the multi-level set (Alice Bishop) awkward and noisy underfoot, while scene transitions are patchy.

This production might benefit from some savage editing and tightening of the staging but, in its present form, it relies too heavily on predictable gags and nods to the horror genre. 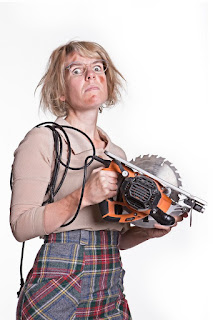 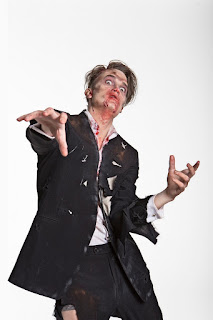 Posted by Kate Herbert at 07:50 No comments: