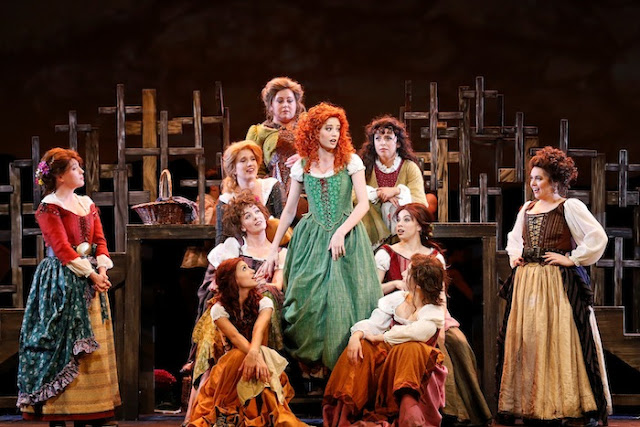 
Lerner and Loewe’s Brigadoon is a deliciously old-fashioned, musical rom-com set in a magical, 17th century Scottish village that materialises out of the mist for only one day every 100 years.

Jason Langley’s production transposes the period from 1947 to 2017 when rich boy, Tommy (Rohan Browne), and his jaded friend, Jeff (Luke Joslin), who are New Yorkers on a tourist trek through Scotland, stumble upon this fairy tale place.

During their single day in this mythical place, Tommy falls in love with copper-haired beauty, Fiona (Genevieve Kingsford), while Jeff fights off the advances of brazen Meg (Elise McCann).

Accompanied by the on stage orchestra under Michael Tyack’s musical direction, the cast provides a feast of musical numbers including Almost Like Being In Love, the memorable love duet sung by Browne and Kingsford.

Browne is magnetic and roguish as Tommy, adding another dimension to the character with his skilful and sprightly dance moves, while Kingsford’s rich, powerful soprano is perfect for the spirited Fiona, and her duet with Browne, The Heather on the Hill, is warm and charming.

Matthew Manahan is boisterously upbeat as bridegroom, Charlie, and he vivaciously leads the ensemble in I’ll Go Home With Bonnie Jean.

Joslin garners laughs as the glib and cynical Jeff while McCann is suitably brassy and seductive as Meg and Nancye Hayes plays the restructured role of Mrs. Forsythe with dignity.

The simple stage design (Christina Smith) provides space for vibrant choreography (Cameron Mitchell) while the hanging wooden crosses that protect the village from the evils of the outside world lend a darker edge to the village story.

Brigadoon is performed infrequently, but the audience’s response to its rollicking tunes, magical landscape and romantic narrative suggests that it should materialise out of the Scottish mists more often. 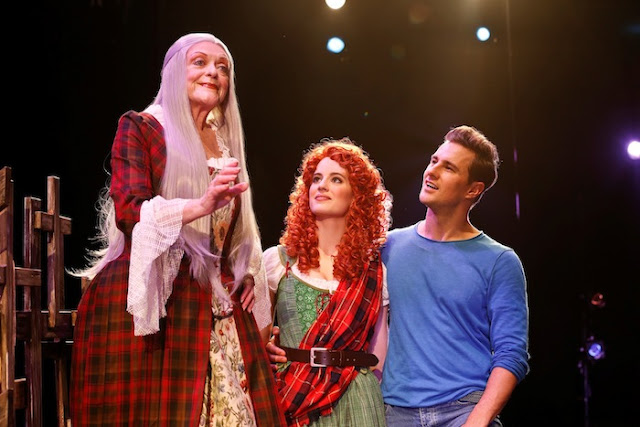 Posted by Kate Herbert at 11:33 No comments: 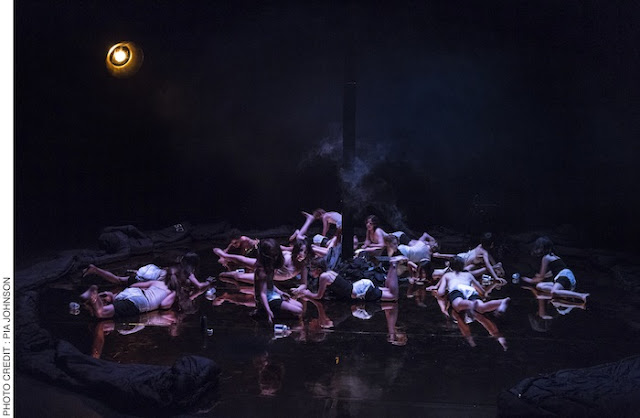 The cast of fifteen children works very hard in Book of Exodus Part II, an abstract, physical interpretation of Exodus, the second book of the Old Testament.

MOVIE
What: What If It Works?
Written & directed by Romi Trower, produced by Tristan Miall
Released in Melbourne on Oct 12, 2017 at Lido, Classic & Belgrave Cameo cinemas
Reviewer: Kate Herbert
Stars:** 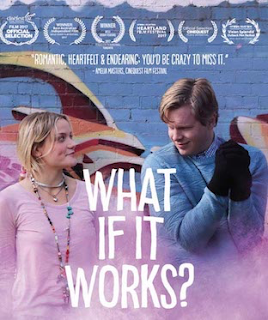 Adrian (Luke Ford) is suspended from his post-doctoral research in quantum physics when his Obsessive-Compulsive Disorder finally impairs his capacity to function.

He encounters Grace (Anna Sampson), a shy artist who has multiple personalities, one of which is G, a provocative vamp and an artist, another being Spike, a crass and abusive loudmouth.

Adrian is a germophobe who cannot abide being touched, wears gloves 24/7 and scrubs everything several times a day. However, he adores driving fast and lives in a chaotic but well-scrubbed garage owned by his father.

This movie suffers from a lack of nuance and complexity in its characters, relationships, narrative and comedy. Adrian, Grace (and her other selves) and the people who surround them are caricatures instead of layered characters. The psychology is simplistic, with Adrian being a two-dimensional representation of an OCD sufferer and Grace’s multiple personalities being broadly comical.

The flimsy and contrived narrative, silly comedy and over-written dialogue are only occasionally interrupted by a couple of more sincere interactions between Adrian and Grace when they perch on their park bench.

Trower vainly inserts colourful drag queens and Melbourne laneways decorated with vivid graffiti to elevate the quirkiness but it is all to no avail when the story is so sketchy.


Parents may relate to a father’s sentimental reminiscences about holding his baby son tucked safely inside his coat on a winter’s day.

They may also feel the aching familiarity of that same father, Andy’s (Joe Petruzzi) pain and alienation when that baby grows into his silent, secretive and surly teenage son, Robbie.

Petruzzi gives a sensitive, nuanced but muscular performance as Andy in American Song, Joanna Murray-Smith’s 90 minute, solo play that was commissioned for an America audience.

Tom Healey’s assured and well-paced direction lends the play emotional and dynamic energy as Andy builds a real, stone wall (designer, Darryl Cordell) while he weaves his tale of hope and joy that turns to grief and horror.

Murray-Smith’s dialogue is conversational and lyrical, philosophical and natural, while Petruzzi is convincing and compelling as Andy, playing him with passion and sympathy.

The writer successfully creates a dramatic structure that initially lulls us into a false sense of ‘happy families’, then sows the seeds of doubt that grow like weeds into genuine fears until Andy reveals one final, horrific incident that changed his life, and the lives of others, forever.

Guns are far too easy to access in America, gun crime is rife and, in a week when so many died in Las Vegas, this play confronts the human loss that is the result of Americans’ unholy and dangerous ‘right to bear arms’.

Through Andy’s musings, Murray-Smith asks where the simpler, more humanist America society that was characterised in Walt Whitman’s famous poem, Leaves of Grass, has gone.

This week, the world is once more asking the same question.

Posted by Kate Herbert at 09:10 No comments:

The love-hate relationship between the mother and daughter in Caravan is ugly, unpredictable and characterised by bickering, confrontations and sporadic reconciliations.

Judy lies stranded on the bed like a beached seal, craving the cheap alcohol that is killing her, while Donna searches for dates on her Tinder account then dashes out to meet them for dangerous, quicky sexual encounters behind the caravan.

The power dynamic is volatile between this co-dependent pair as Donna struggles to nurse her selfish and smug mother who, in turn, whines and manipulates her daughter and refuses, after 37 years, to give her a kind word or reveal the name of Donna’s father.

The dialogue is acerbic and funny, effectively combining Aussie slang with poetic language and, although it has four writers, the tone and style are coherent and cohesive.

With humour and poignancy, the play successfully articulates the desperate plight of these two women who are bound by poverty, tragedy and hopeless dreams of a better life.

Wilks is totally credible as Donna who looks like a trapped and beaten creature that keeps returning to its abuser, while Dee plays Judy with a wry smile and an almost palpable, inner fantasy life that keeps her mood strangely buoyant as she lies incapacitated.

The audience sits outdoors – albeit under cover – peering like voyeurs into the open side of the caravan, experiencing the cramped, physical environment of the ‘white trash’ caravan and feeling the despairing atmosphere of its two inhabitants.

There are echoes of Beckett’s hapless tramps and Stoppard’s Rosencrantz and Guildenstern when the women play games, tell stories and torment each other to pass the endless, isolated hours.

Caravan is an unsentimental observation of this dysfunctional relationship and its leaves an audience hoping that a better day will come for Donna and Judy, but knowing that it will not.

At Fairfax Studio, Arts Centre Melbourne, Oct 5-9 2017
Melbourne Festival
Reviewer: Kate Herbert
Stars: ***1/2
This review is published only on this blog. This NOT a review for Herald Sun. KH

Hamlet killed Polonius. It’s a fictional killing, but we know it happened because we witness him stick the knife into the arras behind which Polonius is hiding while he eavesdrops on Hamlet’s conversation with his mother, Gertrude.

But what would an Australian criminal court make of the evidence?

Please, Continue (Hamlet) is a dramatised and mostly improvised version of a court case against Hamlet, complete with a real judge, real lawyers and forensics expert. The legal personnel change each night but the three constants are the actors playing Hamlet (Chris Ryan), Ophelia (Jessica Clarke) and Gertrude (Genevieve Picot).

If you’ve ever witnessed court proceedings, you’ll know that they can be slow, laborious and mind-numbingly dull with occasional moments of interest or glimpses of brilliance and wit from a barrister.

Such is the case with these proceedings that are based on a blend of Shakespeare’s Hamlet with a real murder case.

On opening night, Lesley Taylor QC led the Defence with confidence, sharp humour and theatrical flair while John Champion SC was formal and dignified leading the Prosecution and forensic pathologist, Ass. Prof. David Ranson was compelling and a bit of a hoot – perhaps unintentionally.

This Hamlet is a lowbrow petty crim rather than a privileged royal and Ryan captures his nervous evasiveness. Clarke’s Ophelia is a resentful party gal while and Picot’s Gertrude is nervy and suitably bemused by the legal palaver.

Please Continue (Hamlet) is perhaps more interesting as an idea than as a piece of theatre but its success depends to a great degree on the legal fraternity’s capacity to entertain a crowd.

Posted by Kate Herbert at 11:47 No comments:

In this production directed by Peter J Snee, the crowd goes wild when these self-conscious women pose with their private bits obscured only by their baked goods and craftwork.

The instigators of this alternative calendar are mischievous Chris (Jenny Seedsman) and her more sedate friend, Annie (Abi Richardson), whose husband John’s (John Voce) death from leukaemia triggers the pair’s plan to raise funds for the hospital that nursed him.

Set in Yorkshire and based on the true story of the astoundingly successful, 1999 WI nude calendar, the play tracks the calendar’s evolution, Annie and Chris’s struggle to gain the support of their stroppy president, Marie (Lise Rodgers), and the national WI, and the personal clashes that arise when the calendar achieves worldwide popularity and fame outstrips charity.

Snee’s production may have its high point in the nude photo-shoot at the end of Act One, but the earlier scenes feel static, with slow cueing and some awkward, stand-and-deliver dialogue.

Firth’s narrative balances warmth with poignancy, although the dialogue gets a bit twee or preachy at times and it is a pity that the important, final scene, when the women visit John’s memorial, sunflower fields on the Yorkshire dales, falls flat.

The performances are good-humoured with McClatchy’s cutely naive Ruth a comic highlight while Waters’ feisty, retired schoolteacher is refreshingly wicked.

The real WI nude calendar has raised over $8 million to date and, in a week when Playboy magnate Hugh Hefner died, it is fun to compare the impact of the cheerful, charitable WI nude calendar with the nudie centrefolds that it parodied.