Because this reviewer saw every KTTP production in Melbourne, it is difficult not to compare Lost: 5 and its mostly young cast to KTTP’s exceptional interpretations and seasoned actors.

Marty Rhone, himself a veteran of the music and theatre industries, provides a heart-stopping, achingly truthful performance in Kaddish, portraying an elderly man suffering crippling grief after his wife’s death and mourning her pauper’s burial.

Rhone inhabits the character, leaving the audience gaping as he shifts from reflective reminiscence to howling pain caused by the open wound of his loss.

Fleur Murphy, in The Rain, sympathetically portrays an old, German woman who spent her life hoarding and protecting the belongings entrusted to her by detainees being transported to the concentration camps.

The remaining young cast members do not as effectively capture the poetic style or complex psychological states of their characters.

Stephanie Pick performs Two Shanks as a silent, young woman who finds an abandoned baby in a rubbish bin while, in A Foundling, Pearce Hessling plays a timid, anxious young man who cherishes a dead bird.

In Getting Shelter, Keneisha Nottle’s character vibrates with clown-like energy that contrasts with the reality that she is dying in a hospital ward. It is hard to reconcile this youthful portrayal with Bob Hornery’s original performance of the same character as an old geezer in 1999 for KTTP.

Although the acting is uneven, the quality of Keene’s writing and Rhone’s performance makes Lost: 5 a noteworthy theatrical experience.

Posted by Kate Herbert at 16:06 No comments:

Perfect’s feisty songs, with their pithy lyrics, diverse styles and quirky musical arrangements (James Simpson), are the highlight of Dean Bryant ’s production, along with the vivacious, hilarious cast of actor-singers.

When Liz and Ben (Verity Hunt-Ballard, Brent Hill) and their friends, Evan and Cynthia (Ben Mingay, Christina O’Neill), bid for the same house in desirable North Fitzroy, tempers fray and their long-standing friendship, based on Ben and Evan’s award-winning, now-defunct comedy act, suffers a fatal blow.

But this auction feeding frenzy is just the beginning of a descent into madness involving the rise of a despotic rule of law designating ‘home owners’ a privileged class protected by armed guards who shoot ‘renters’ who invade the ’Owners’ Zone’.

The scenario gets even more absurd when the tentacles of an unseen (until the final scene) mind-controlling creature (voiced by Virginia Gay) invades the minds of aspiring homebuyers and starts murdering renters.

If we expect political satire to mercilessly flay its targets, then Perfect misses an opportunity to attack significant impediments to home ownership: investors, developers, banks and government. The hapless, single homebuyer seems a soft target.

The clever, entertaining songs make the play’s structure, narrative and dialogue look ordinary and repetitive, and the songs might be better served in a cabaret format linked by incisive, satirical banter.

The multi-talented performers play instruments and sing the irreverent songs, including: Gay’s rendition of Soft Close Drawers, the show standout reminiscent of Kurt Weill, the spirited What the F... Was That?, Better (‘I’m doing better than them’), and Lambert’s lament about her failed auction bid.

If you enjoy a swipe at the housing market and crave songs and silliness in the Silly Season, Vivid White may be just the ticket.

Vivid White Song list
Prologue: What The Fuck Was That?
A House is More
Rescue Dog
Better Gillian Consgriff
The Part of You That Never Moves Out  Lambert lament
They Come Late (Or Not At All)
Hands
Taking Out The Bins
Edinburgh 2005
Soft Close Drawers
One Satirical Song
Vivid White
Men’s Right’s Activist
Snowflake

Posted by Kate Herbert at 14:30 No comments:

THEATRE
Written by Morgan Rose, Red Stitch Actors’ Theatre
(Red Stitch INK new writing program)
At Red Stitch Actors’ Theatre until Dec 14, 2017
Reviewer: Kate Herbert on Wed Nov 22, 2017
Stars: ***
Finding one’s identity can be a lifetime task and all members of the unremarkable family in Desert, 6.29pm struggle to define their places in the world and find it even harder to explain their confusions to loved ones.

Xan’s behaviour becomes more manic, secretive and bizarre when she spirals into grief after her mother announces that local girl, Jo, has thrown herself off the overpass.

Her out-of-control reactions, and the self-narration that accompanies that behaviour, indicate that Xan had an intimate relationship with Jo that she is unable or unwilling to reveal, so she remains trapped and alone in her grief.

The first half of the play is the more effective, with its comical, well-observed dialogue, characters and relationships that highlight the ordinariness of this family, their respective fantasies and thwarted ambitions.

However, the second half loses momentum when it diverges too far from Xan’s story and shifts focus to Jamie and his girlfriend, Abby (Ella Caldwell), sending the story off the rails, with little being satisfactorily resolved or completed by the end.

Bridget Balodis’ direction starts briskly and effectively but the short, snapshot scenes are too frequent in the latter half.

Seymour’s Xan has a brittle edginess but it is a difficult role as Xan’s adolescent meanness is so dislikeable even though we sympathise with her grief.

Sutherland is a delight as Crystal who craves approval and scrambles to keep the family functioning, while Petruzzi captures Rico’s bluff, blokey quality that hides his morbid fear of dying, and Kent embodies the video game geek who has not fulfilled his potential.

Posted by Kate Herbert at 09:20 No comments: 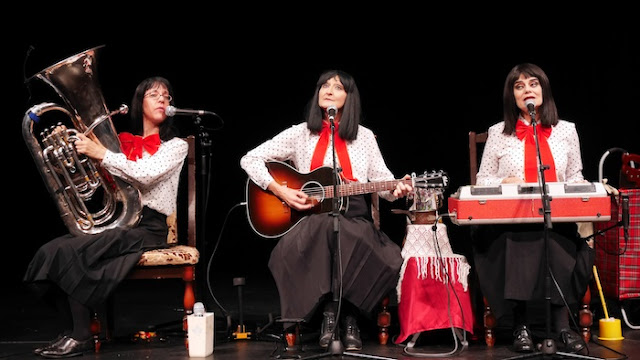 They perform Christmas themed tunes on unconventional instruments – the saw, tuba and a 1960s keyboard – and their oddball musical arrangements transform Chrissie carols into oompah-oompah tunes or a horror movie soundtrack.

While Mourne appears to be a barely controlled lunatic, Eve is her naive follower, and poor, bullied Dawn looks like a frightened hamster.

Mourne drives the show with her dry, gloomy but witty patter as she and Eve tell awful tales of their isolated and deprived childhood in a caravan in the tiny, Queensland town of Esk, while their ostracised half-sister, Dawn, watches mutely.

This cunningly written and well-structured cabaret looks as if it is thrown together by three incompetent old bats, but is clearly the result of the masterly musical-comedy skills of its three performers.

Their version of Santa Claus Is Coming to Town will haunt any child’s Christmas dreams, and a medley transforms popular songs by Lady Gaga, Daft Punk and Sia into Kransky Christmas chaos.

The audience participates with glee, rattling their car keys to Ring of Fire and singing the chorus of Deck The Halls, then the sisters reinvent The Twelve Days of Christmas, assisted by two cheerful victims dragooned from the audience.

This is bizarre and memorable Christmas cabaret that will make you value your normal family and view your Christmas songs in a new light.

The brittle, sharp-witted character in Colm Tóibín’s The Testament of Mary bears little resemblance to the biblical Mary, mother of Jesus, whose purity and forbearance inspired countless religious orders, churches and artworks.

In Anne-Louise Sarks’ production, Pamela Rabe vibrates with barely contained anxiety as she describes, from Mary’s perspective, events leading to the capture, torture and crucifixion of her unnamed son who we know to be Jesus Christ.

Mary roams the bleak, clinical, dimly lit rooms that feel like a prison as she waits for the return of two men, disciples of her son who need her to endorse their narrative that frames her son as a miracle worker and the Son of God.

But Mary tells a different story of a grieving mother wracked with guilt, fear and shame: a mother whose radicalised son is now unrecognisable to her.

Her tale resonates with stories of the mothers of radicalised zealots, who cannot understand their sons’ changed behaviour.

Rabe’s performance is intimate, restrained and steeped in pain as Mary relives episodes including Lazarus’s rising from the dead, a wedding at Cana, Jesus carrying the cross and his horrific crucifixion.

The most powerful scenes are Rabe speaking uninterrupted, directly to the audience, standing still and trembling without the earlier unnecessary action or lighting changes.

However, a body microphone amplifying her voice unnecessarily restricts Rabe’s vocal and emotional range and, although the stylish design (Marg Horwell, Paul Jackson) plants Mary firmly in the modern era, it does not illuminate Mary’s story or adequately reflect Tóibín’s poetic language.

Tóibín’s Mary’s grim story of a distraught mother is as credible as those of the male, gospel writers but hers is more realistic and accessible. 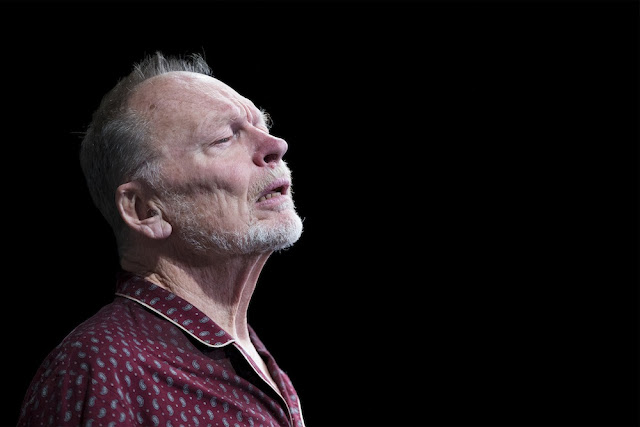 
Watching someone you love spiral into dementia is distressing, but being the person experiencing that descent into confusion must be far, far worse.

And so it is in Florian Zeller’s play, The Father, as we view André’s (John Bell) life from both the outside and from his own addled and angry perspective.

Bell is charming, frightened, frustrated and frustrating as André as he struggles to comprehend the changes in his immediate surroundings when he moves from his own, beloved apartment in Paris to live with his daughter, Anne (Anita Hegh), and her partner, Pierre (Marco Chiappi).

André’s familiar and previously secure world is evaporating as we watch: furniture disappears, he repeatedly loses his precious watch, and he does not recognise his daughter, her partner or his carer.

In a sensitive, nuanced and heart-rending performance deftly directed by Damien Ryan, Bell effectively captures André’s transformation from a belligerent, confident and intelligent older man, into one plagued by angst, fear and bewilderment.

The witty dialogue makes comedy the flip side of despair and characters shift from friend to foe as we observe them from André’s viewpoint.

Hegh is sympathetic as Anne who is overwhelmed by her father’s deteriorating condition, while Chiappi, as her partner, plays the supportive but pragmatic voice of reason.

The Father is a warm but confronting play that tilts our perceptions and challenges our views of ageing and dementia. 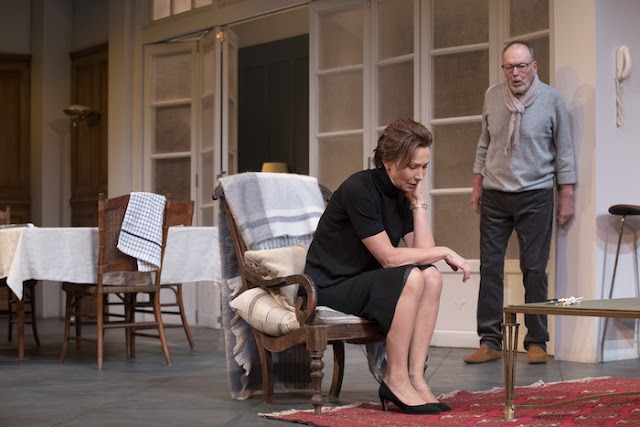 Posted by Kate Herbert at 11:12 No comments: