Grab a picnic basket, a rug, hat and sunscreen and toddle off with the toddlers to the Botanical Gardens for another cheery, jaunty performance of The Wind in the Willows, adapted from Kenneth Grahame’s very English, 1908 children’s book.

The kiddie-rabbits giggle and shout at the cheerful, nose-twitching Head Chief Rabbit (Scott Mackenzie) trading insults, songs and silly puns with Weasel (Paul Morris), but the kids may be equally diverted by rambling water birds, a duck waddling across the lawn, or a dragonfly cruising by.

The children hoot at the characters’ antics, join a picnic, go on an adventure, then on a dangerous mission with the Rat Pack and Badger Patrol to rescue little Portly the Otter (Dusty Bursill) from the scary, Wild Wood.

In Otis Elston’s production, the kids enthusiastically sing ‘waggle your ears, wiggle your nose,’ and the inimitable ‘Quack quack quackady-quack’, and shout ‘He’s behind you!’ in best panto style.

In his gaudy green and pink outfit, Hawke is the flamboyant, vain and plump poseur, Mr. Toad, who behaves like a bratty, British, entitled twit whose head is turned by every new fad from canoeing to motorcars.

Playing the remaining, goofy characters are Kaya Byrne as river-dwelling Ratty, Chloe Bruer-Jones as timid Mole, Doru Surcel as toffy, pompous Badger and Jolan Walker as Otter, a Policeman and a dodgy Judge.

Willows has been a Melbourne summer institution now for 31 years so, if you’ve been hiding indoors for 31 summers, get out now with the family and ‘waggle your ears, wiggle your nose and sing whispering willows.’

Posted by Kate Herbert at 12:30 No comments:


Review also published in Herald Sun Arts in print on Tues Dec 19, 2017. KH
The comedy in Highly Flammable Love is as out of control as the bush fire that ignites in the second act.

Dennis (Doherty), a law graduate, moves from Melbourne to Shilangatta, a remote country town, to be with girlfriend, Kelly (Sengstock), a local copper, but Kelly dumps Dennis unceremoniously, leaving him sulking, boozing and stalking Kelly for months after their break-up.

Writer-directors, Marcus Doherty and Zara Sengstock, are filmmakers who have shifted focus from screen to stage by producing an Australian romantic-comedy for the theatre.

Even experienced theatre-makers avoid writing, directing and acting in their own work, and, although we appreciate the efforts of this creative duo, this overly long production lacks basic dramatic techniques.

From the first awkward scene on a bench at Shilangatta Train Station, the characters and relationships are one-dimensional, the jokes puerile and the performances amateurish and overacted.

Although some audience members laugh aloud, the story is muddled and the dialogue jumps from infantile arguments to preachy exchanges about relationships, gender roles and personal freedom.

The production cries out for a dramaturg to shape the script, and a director to focus the style, balance the pace, inject dramatic energy, stage scenes imaginatively and tighten scene changes.

The style leaps from sketch comedy and messy slapstick, to weird musical/choreographic routines, then to oddly serious dialogue about life, love and arson.

After a patchy first act, the second promises more substance, but soon deteriorates into silliness when characters in cardboard-box cars skitter around the stage in a cartoonish car chase.

Ayesha Gibson, as Zoe the attractive arsonist, provides some credible acting, but Doherty’s uncomfortable grimacing and awkward physicality as the hapless Dennis, is distracting.

Even with the best of intentions and a decent premise, a show can collapse, and Highly Flammable Love needs a skilful theatre doctor to revive it.

Posted by Kate Herbert at 11:17 No comments:

The venue presents multiple shows, but I’m Dreaming of a Christmas Cabaret is a short, Chrissie-themed, cabaret hosted by the charming, talented Matt Allegro (Matt Hadgraft), the show’s highlight who is unfazed by the night’s tiny audience.

He opens with a snappy, jazz version of Jingle Bells that references ‘the local Liquorland’ then introduces timid twins, Amy and Mel, who are clad in Santa-inspired red-and-white outfits and sing three songs, including Jingle Bell Rock, accompanied by simple, but awkward choreography.

Ukulele Will is gently entertaining with his ukulele version of a naughtily suggestive Christmas song written by Scared Weird Little Guys.

Allegro hauls out an upright piano, which he plays skilfully, delivering his version of The Twelve Days of Christmas: a scathing attack on awful Christmas gifts from the rellies (‘four appalling shirts, two ugly mugs’).

Victoria Wolfe is cute, sassy and curvaceous, although her routine that is billed as ‘contortion’ is, rather, a series of charming but simple variations on the splits.

After Allegro’s goofy routine about awful jokes inside Christmas Crackers, he introduces Jem’Appelle, a petite brunette with a dodgy French accent who channels Piaf with renditions of Padam Padam, Je Ne Regrette Rien and Autumn Leaves.

Allegro’s final set includes Santa Claus Is Driving The Tram and a finale in which he dragoons an audience member to lip-sync his rowdy version of We Wish You A Merry Christmas.

We can assume that he didn’t realise his victim was also his reviewer. Lucky it was fun on stage with him!

CONCERT / TRIBUTE SHOW
Produced by Showtime Australia
At The Athenaeum, until Dec 30, 2017
Reviewer: Kate Herbert  on Dec 15, 2017
Stars:****
Review also published in Herald Sun Arts in print on Tues Dec 19, 2017. KH
Talk about enthusiastic! The Melbourne audience members at The ABBA Show were as involved and effervescent as the performers, leaping to their feet, dancing in their seats, waving their arms and singing along like kids at a Wiggles concert.

Their Swedish accents may be dodgy and their banter decidedly cheesy, but the foursome sings with gusto and Pocock and Ball capture the spirit, glamour and sensuality of Agnetha and Frida as they stamp their knee-high boots, flick their hair and sing with passion and flair.

The ABBA Show includes original video of the real ABBA performing, but this concert has no narrative and any dialogue is used merely to introduce songs or encourage fervent fans to sing and dance.

Ball brings an audience member on stage as ABBA’s ‘man after midnight’, and vivacious volunteer, Jack, becomes a show highlight, donning a feather boa and sequined hat before outdancing Agnetha and Frida.

The ABBA Show is delightfully daggy, and witnessing middle-aged blokes wiggling their bods and flailing their arms to Mamma Mia is a delicious pre-Christmas treat. 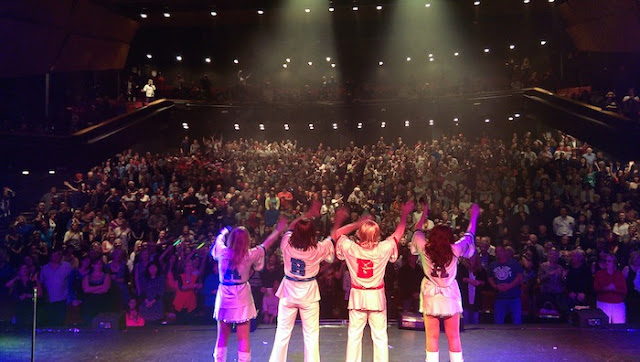 Posted by Kate Herbert at 06:00 No comments:

We Are Lightning!, by Joseph O’Farrell (JOF) and Sam Halmarack, is shambolic, messy and confused, but parts of the show are oddly diverting.

The premise is that a live music venue is closing, so JOF and Sam are producing one, final night of performance, incorporating their own music and segments by a community choir, a young, local band, two older, rock guitarists and a six-piece brass section.

The audience stands like a crowd at a pub gig, switching its attention between four, small, shabby stages, one set against each wall of the cavernous North Melbourne Town Hall, and sometimes trying to watch all four stages at once.

JOF and Sam present as a sort of demented comedy duo, with JOF being the extroverted, yammering guy playing drums and brainstorming outlandish ideas for the show, while Sam plays guitar, sings his original, love ballads and runs away when the show gets overwhelming.

The audience enjoys JOF and Sam’s songs and banter and the brass sextet is a treat – especially when they appear in marching band outfits – but the two guitarists’ hard rock riffs are all too brief. Give us more!

The 50-person community choir sings Shenandoah, adds back-up vocals to Sam and JOF’s numbers or strolls around the hall in colourful robes, while the youth band plays original songs, one of which muses nostalgically about being 17.

A voice-over by one of the participants captures the confused form of this show when she announces that JOF and Sam have produced a show that’s not actually the performance for which she and others signed up.

We Are Lightning! starts with some good and some goofy ideas, but it is not ground-breaking theatre and its execution is chaotic and rambling so it needs some tightening and clarifying.