NB: This short review will appear only on this blog. It is not written for, or published in Herald Sun. I've been having a break from reviewing. KH 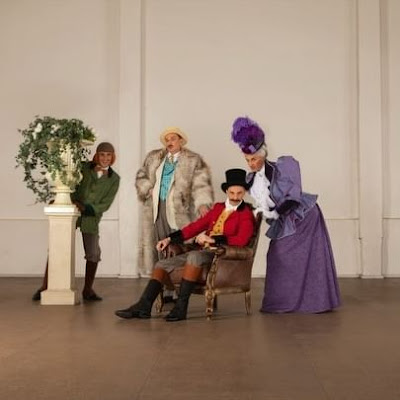 Alec Guinness’s inimitable virtuoso portrayal of multiple characters in the British comedy, Kind Hearts and Coronets, inspired me as child to choose a career in character comedy (Yes, I was doing that long before reviewing!).

This daffy, Tony award-winning musical, A Gentleman’s Guide to Love and Murder, is the same story with a different title and, in a nod to Guinness’s performance, Mitchell Butel plays all eight, toffy members of the D’Ysquith family.

With consummate comic timing and versatile characterisation, Butel plays pompous aristocrats, a camp dandy, a blousy dame, an execrable actress, a lisping vicar and the refined head of the D’Ysquith family.

Chris Ryan is in fine voice playing Monty Navarro, the penniless clerk who discovers he is ninth in line to be Lord D’Ysquith. But the D’Ysquiths dismiss Monty’s claim so he starts knocking off all eight heirs to the Earldom. Monty narrates his story from a jail cell.

The show is a diverting night in the theatre, with plenty of laughs at the expense of these upper class Twits and lots of quirky character performances by Butel.

The orchestra is tight and finely tuned, but the songs (music & lyrics, Steven Lutvak; book & lyrics, Robert L Freedman), despite their witty lyrics and smart rhymes, all start to sound the same in the end.

This show is like Gilbert and Sullivan colliding with Oscar Wilde and an old fashioned Ealing comedy. It's fun and frivolous but it breaks no new ground in musical theatre.
by Kate Herbert

Posted by Kate Herbert at 10:53 No comments:

When Caesar (Kenneth Ransom) becomes too ambitious, former supporters, incited by conniving Cassius (Nick Simpson-Deeks), convince Caesar’s friend, Brutus (Ivan Donato), to conspire with them to assassinate Caesar on the Ides of March, a date about which a soothsayer warned Caesar.

Shakespeare’s play is an epic political thriller with slaughter, battles, treasonous plots and a political coup.

James Evans’ scaled-down, touring production is a novel interpretation of a power grab, but its severely edited script and grungy style cannot deliver Rome’s grandeur or the devastatingly vicious in-fighting of its formidable antagonists.

Donato brings strength and truthfulness to Brutus’s struggle with his decision to murder Caesar, delivering Brutus’s monologues with clarity and conviction, while Ransom’s Caesar is vain, insecure and easily swayed by flattery.

Simpson-Deeks’ Cassius is suitably manipulative while convincing Brutus that their treachery is reasonable.

Mark Antony (Sara Zwangobani) is played here as a woman, and Antony’s renowned speech, ‘Friends, Romans and countrymen,’ is uncomfortably split before and after interval, although Antony’s rhetoric to rile citizens to mutiny against Caesar’s assassins is effective, despite Zwangobani’s mild delivery.

Caesar’s gruesome assassination is stylised but awkwardly choreographed and his bloodied corpse is never seen, while the deaths of Cassius and Brutus are so casual as to be dismissive and lacking tragedy or drama.

This production will not appeal to Shakespeare purists but may engage those unfamiliar with his plays with its stripped back, industrial grunginess.

Posted by Kate Herbert at 10:40 No comments:


I didn't review this show but here is some info & a pic. KH 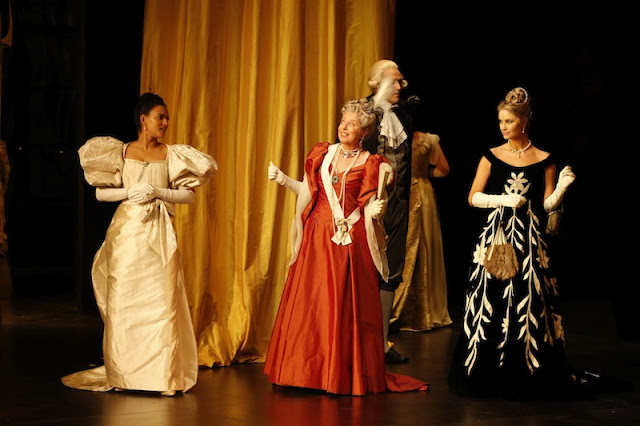 Posted by Kate Herbert at 09:59 No comments:

Book, Music and Lyrics by Richard O’Brien
Produced by Howard Panter, John Frost and GWB Entertainment
At Her Majesty’s Theatre, until August 26, 2018

I couldn't review this show, but here's a couple of pics. KH

Posted by Kate Herbert at 14:21 No comments:

Melancholia, from the film by Lars von Trier
Adapted for the stage by Declan Greene
By Malthouse Theatre.
At Merlyn Theatre, Malthouse, until August 12, 2018.

I didn't review this show but here is a pic and some info. KH

Lip Service, by John Misto
By Strange Duck Productions.
At Southbank Theatre, The Lawler, until July 28, 2018.

I didn't review this show but here is a pic and some info. KH

Lip Service is set during ten years of Helena Rubenstein's career in New York and deals, among other things, with her rivalry with Elizabeth Arden.

Coral Browne: This F***ing Lady!
Written by Maureen Sherlock
By Prospect Productions
At fortyfivedownstairs, until July 22, 2018

I didn't review this show, but here is a pic and and some info. KH

Genevieve Mooy plays Coral Browne, an Australian actress who made it big in England and America. She even married Vincent Price! Browne is relatively unknown here despite having been born in Footscray.

Festen, by David Eldridge (no review)

Festen, by David Eldridge, by Play Dead Theatre
Rippon Lea Estate Ballroom, Elsternwick, until July 22, 2018.
I did not review Festen, but here is a pic and cast/ creatives.
Based  on an award-winning Danish film of the same name.
Jennifer Sarah Dean - Director

Posted by Kate Herbert at 13:51 No comments: