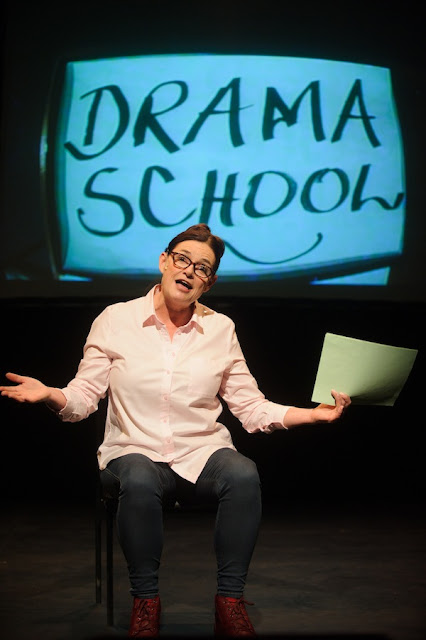 'Welcome to my life', says Hannie Rayson as she bursts enthusiastically onto the stage at the beginning of her one-woman storytelling show, Hello Beautiful!, based on her 2015 memoir of the same name.

Whether she is addressing the audience directly or reading stories selected from her book,  Rayson exudes warmth and a quiet humility tinged with gentle confidence that comes from a successful writing career.

Directed by Matthew Lutton, she reads her stories standing at a small lectern or seated at a desk littered with papers, while story titles and family photos are projected on a screen behind her.

Rayson wears her heart on her sleeve as she reveals her emotional and psychological quirks, and embarrassing or enlightening experiences during her evolution from psychology student at Melbourne Uni, to drama student then, eventually, into successful playwright.

Leaky is a series of witty observations about her childhood and the whispered secrets about ladies' internal plumbing and other secret women's business, while The Snake and the Shared House captures with acerbic wit, the chaos, foibles and grubbiness of life and love as a student in the 1970s in a shared house in Fitzroy.

Other stories address Rayson’s social and political views about feminism, work and the politics of the nation, while the story titled Arthur Boyd is a poignant tale not only of meeting the great artist himself, but also of a tragic turning point in her own life.

Drama School reveals with incisive observation, the quirks of studying theatre at the Victorian College of the Arts in the 1970s and the launch of Rayson’s career as a playwright when she and her colleagues formed the company, Theatreworks.

This hour-long show will appeal to fans of Rayson’s writing and those who value simple, engaging storytelling about ordinary and extraordinary moments and familiar people and places.