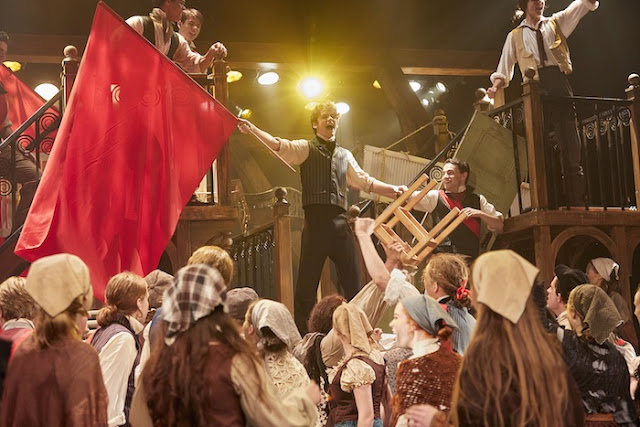 This production of Les Misérables by Young Australian Broadway Chorus may have a youthful cast, but their enthusiasm is contagious and the show entertaining, vivacious and often moving.

Les Misérables, based on Victor Hugo’s epic novel, is set in the early decades of 19th century France, ending in Paris after the tragedy of the failed1832 Paris Uprising.

The lead performers are capable actor-singers, but several give standout performances. Bryce Gibson plays the key role of Jean Valjean, the former convict, now gentleman, pursued relentlessly for decades by his nemesis, the policeman, Javert, played by Nicholas Sheppard.

Gibson and Sheppard may lack the years and gravitas usually required for these ageing rivals, but their commitment is unquestionable. Gibson’s renditions of Who Am I? and Bring Him Home are powerful and heartfelt while Sheppard makes a noble tragedy of the song and scene of Javert’s suicide.

Jordie Race-Coldrey is charismatic as Enjolras, leader of the student revolt, and, with his fine vocal tone, he effectively leads the ensemble in the stirring chorus of the anthemic song, Do You Hear the People Sing?

The rich-voiced Rhea Brendish makes a fine Eponine, Jasmine Arthur’s bright soprano is suited to Cosette who falls in love with Ben Gonsalvez’s rather goofy Marius, while Emily Svarnias breaks hearts as Fantine, singing the heart-wrenching I Dreamed A Dream.

The talented, youthful orchestra skilfully delivers the thrilling music that underscores the spirited, massed choruses and makes this production of Les Miz a musical treat that may be the starting point for a few professional musical theatre careers.