The excitable and very vocal crowd cheers and gasps at the remarkable, jaw-dropping special effects of John Tiffany’s production that combines magical illusion, black theatre puppetry, startling appearances and disappearances, and whirling choreographic scenes - oh, and familiar characters as well as new ones.

Tiffany keeps the action swift and vivacious in Parts One and Two that are an endurance test of over five hours for the audience - but nobody seems to mind.

Based on an original new story by JK Rowling, Jack Thorne and John Tiffany, this new play, written by Jack Thorne, which hurls us back into the world of Hogwarts when Harry (Gareth Reeves) and Ginny’s (Lucy Goleby) son Albus (Sean Rees-Wemyss) begins his less than stellar school years at Hogwarts Academy.

A cunning twist is that Albus's best friend is the goofy and incompetent Scorpius Malfoy (William McKenna), son of Draco, Harry’s childhood nemesis.

The signs at the theatre say, ‘Keep the secrets’, so this we will do. You will not hear anything of the cursed child, the changing fate of young Albus, Scorpius, Harry and his cronies, Ron Weasley (Gyrton Grantley) and Hermione (Paula Arundell) or the current headmistress Professor McGonagall (Debra Lawrance).

If you loved the Potter books and movies, this is a must-see for you. There are working magic wands, magical creatures, moving staircases, terrifying dementors, villains and heroes, battles for life and death, broken familial relationships and all your favourite characters.

The heroes of this production are the invisible people who manipulate human bodies, puppets, staircases, wands and other paraphernalia to create this fantastic world before our eyes.

As Scorpius, McKenna delights the crowd from start to finish, and Rees-Wemyss, as Albus, is a suitably disenchanted, rebellious teenager.

Occasionally, some dialogue feels a bit cheesy and uncomfortable, a few characters are a bit shouty and lacking vocal control, and the story is extremely convoluted.

But, ultimately, there is plenty of spectacle to keep the audience cheering and clapping as we witness the continuation of the fight between good and evil that is at the heart of the Harry Potter series. Everyone goes home tired and happy. 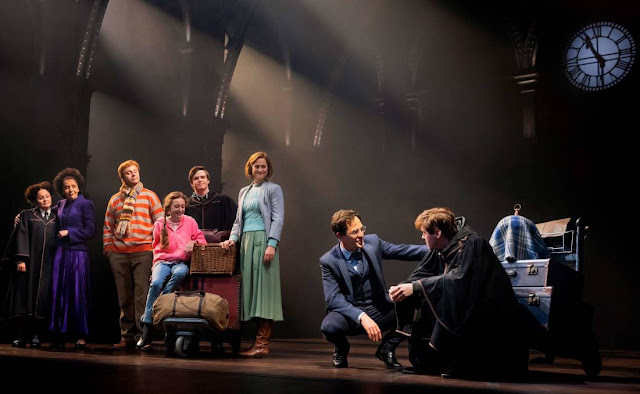 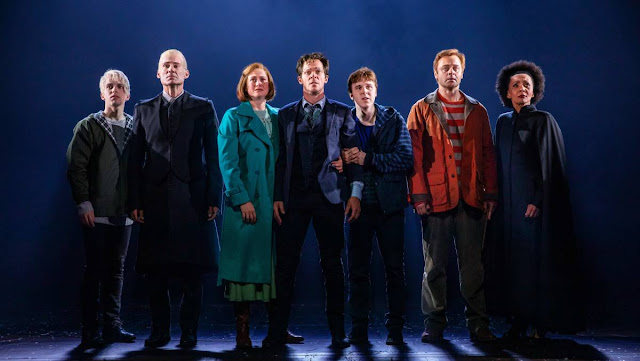 Posted by Kate Herbert at 12:59 No comments:


Miriam Margolyes bustles about the stage like a demented doll in The Lady in the Van, bossing and bellowing at her reluctant and conflicted 'neighbour', Alan Bennett - or is he her ‘host’?

In his play, directed here by Dean Bryant, Bennett depicts himself as two separate aspects of his character: Alan Bennett 1 (Daniel Frederikson) who reluctantly allows this recalcitrant, old lady to park her equally scruffy van in his garden indefinitely and assists her with letter writing and numerous complaints against the society on the fringes of which she dwells.

Alan Bennett 2 (James Millar), dressed identically to his doppelganger, scribbles in his notebook, journalising every eccentric activity of his malodorous subject whose name, she says, is Miss Mary Shepherd.

Margolyes' performance is bold, vigorous and comical, and intermittently reveals a vulnerability that allows us to see the inner turmoil and fractured mind of this peculiar, former nun who lives in her squalid van but still clings to a thread of dignity.
Bennett's characters and narrative gently raise issues of tolerance, community spirit and the failures of the social welfare system, while the middle class characters, Pauline (Fiona Choi) and Rufus (Dalip Sondhi) pretend to be liberal and spout sympathetic, lefty rhetoric while shunning the lady in the van.
The cast is strong, however the episodic structure and lack of depth of most characters, apart from Miss Shepherd, make the play feel like it skims across the surface of the story.

The staging cunningly creates a sense of location by sliding chairs, fences and even vans on and off stage on invisible tracks, but this device becomes distracting.

The Lady in the Van is a gentle, funny and sometimes moving story about a woman whose life should have gone along another track and it reminds us that we are becoming a less caring community that needs to assist and provide for its more vulnerable members.