Michael Gray Griffith’s play, Marooned, has a creeping, disturbing atmosphere, which is not surprising in a play about suicide.

What may be surprising is the quietly increasing sense of hope that the four characters, three men and one woman, feel as they wait, marooned, in an anonymous waiting room after being informed by an inaudible voice that their ‘attempts have failed’.

The existential pain is palpable in each character as they slowly and uncomfortably reveal their suicide stories, helping each other to understand their predicaments, and realising that they want to live. But in order to return to their lives, they must be permitted to leave the waiting room.

Darcy Smith is vulnerable as the sensitive, young, gay man; Christopher Jay is brash and gruff as the tough-guy tradie with tattoos; Rohana Hayes is brittle and reserved as the older professional woman; while Gregory Caine thoughtfully portrays the profoundly disillusioned businessmen whose relationship with his wife and children is irreparably damaged.

Each of the characters’ stories represents a different group in our community, but all reveal how delicate is the human psyche, how fragile is our mental health and how tenuous our grip on this life.

Performances are intense, committed and credible, although the pace of the production is slow and could benefit from tighter cueing and greater variation in rhythm and dynamic range to increase the dramatic tension.

This production needs a trigger warning for audiences who may find this topic distressing, but the play has the support of suicide prevention adviser, Malcolm Guy, who spoke briefly before the play about how best to communicate with a suicidal colleague, friend or family member.

Just one moment of intervention, a kind word, or a listening ear could prevent a tragedy. Marooned may be upsetting for the audience, but our new awareness may help save a life. 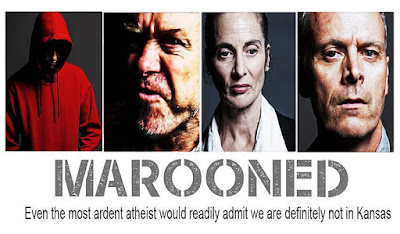 
'Written in two days of furious writing, half of it in a lonely hut in the bush, this Melbourne play, that was rehearsed in a living room is kicking extraordinary goals. After writing for years in obscurity Michael Gray Griffith is emerging as the bravest and one of the most powerful playwrights of his generation.

'Four souls, one woman and three men are Marooned in a waiting room in the afterlife. They have no connection other than they have all tried but apparently failed to take their own lives. Because they are strangers they are able to talk about their suicides in a remarkably frank way. But as time slowly passes, in a series of vignettes, some of them not only begin to yearn to go home but fear that they haven’t survived. This fear and this want manifests into an ever- growing hunger to live. But despite this hunger they are still Marooned. Finally, one of them believes that their only way out, is for them to come together and explore the silence of why they are here.'

Posted by Kate Herbert at 09:27 No comments:


For a soccer team of Catholic lads, winning the 1969 final of the ‘beautiful game’ – as soccer is known – cannot shield them from the ugliness of the bigotry and sectarian violence in their home of Belfast.

Taking place from 1969 to 1971 in Northern Ireland, Ben Elton’s book for The Beautiful Game provides a challenging and thought-provoking glimpse into the corrosive impact of The Troubles on these young lives.

Stephen Mahy is charmingly gawky, naïve and hopeful as talented soccer player, John Kelly, who falls for and marries his teenage sweetheart, Mary (Stephanie Wall), and plans to leave Belfast to play for Everton in Liverpool.

Mahy and Wall’s budding teenage romance is credible, and Mahy’s warm, powerful voice is well-matched by Wall’s bright, clear tone in their love ballads and the quirky duet, Don’t Like You.

An ensemble of capable singers supports Mahy and Wall in Karen Jemison’s swiftly paced production. The gaggle of Catholic girls, who are a like a team cheer squad, includes engaging performances from Nicola Bowman as virginal Bernadette and Ellie Nunan as naughty Christine.

A tight, skilful band, under musical director, Daniele Buatti, does justice to Andrew Lloyd Webber’s music that incorporates Irish rhythms and instruments into poignant ballads such as Let Us Love in Peace and stirring anthems including the title song and God’s Own Country.

Elton’s lyrics are sometimes a little heavy-handed and his dialogue preachy or obvious. The narrative loses momentum at the beginning of Act Two, which starts with a wedding, rather than ploughing on into the crisis facing John and Mary as The Troubles touch their lives when a friend is killed, another knee-capped, one joins the IRA, and an innocent is imprisoned.

It’s difficult to distill into two hours the impact of the hundreds of years of Irish conflict, but The Beautiful Game has a fair crack at doing just that.

Posted by Kate Herbert at 10:41 No comments:


The Rapture Chapter II: Art vs Extinction, may seem totally bonkers, but this new production by Finucane and Smith is also intellectually challenging, visually stimulating and socially responsible.

In this tempestuous show described as ‘apocalyptic cabaret’, the ‘eye’ of the storm is Moira Finucane (more like Moira ‘Hurricane’), who rails and rants about social, political and personal ‘truths’ while parading in and out of eye-popping costumes along a raised catwalk.

Finucane visited the Antarctic and returned with a fearsome, new character, an Ice Queen who weaves ominous tales of melting ice flows and disappearing species that foreshadow further climatic degradation and woe for our planet.

She transports her ardent audience and transforms herself, shifting costumes, characters and topics for almost two hours – much of which is compelling but some of which is cryptic or confusing. The production could benefit from a neat trim.

A highlight, in addition to the Ice Queen, is Finucane’s cleverly written, rhyming, poetic saga, The Krill, that feels like a merging of The Ancient Mariner and Moby Dick, although its hilarious and shrill Krill chorus (Mama Alto, Piera Dennerstein) is unique.

There is a topless ranting punk; a character draped in plastic, ocean fishing net while bemoaning the horrors of ocean drag-nets; the weird woman wrapped in fur and feathers, hailing from a theatre near a forest in Denmark and railing about violence against women; and Finucane’s final, naked, vulnerable and panic-stricken creature, dripping with inky, black fluid.

Ray Dimakarri Dixon, a Mudburra artist from Marlinja, NT, sings plaintiff and enchanting songs in his aboriginal language that is spoken by only 50 people, and his presence is the pure, still point in this show. He is truly ‘a keeper and protector of the land’.

But the show ends on a positive note, with Finucane, at the final bow, announcing that the entire audience will receive her ‘Roadmap to Hope’ that is printed on recycled paper in a brown bag filled with treats. It is worth a read and the krill lollipop is very cute!

Here's what I'm planning to see in the Theatre Program at Melbourne Festival this year. I'm not seeing everything and not reviewing all that I see. Will review three shows for Herald Sun, but I'll post reviews of most on blog. There may be changes.
Stand by. KATE

Posted by Kate Herbert at 12:53 No comments:


Longhouse: Melbourne
Panel discussion presented by  Melbourne Theatre Company and Contemporary Asian Australian Performance
Thur 5 Sep, 6pm – 8pm
Southbank Theatre, The Lawler
This panel discussion may be of interest to some of you. KATE
From Media Release:

'Contemporary Asian Australian Performance returns to Southbank Theatre on Thursday 5 September for a panel discussion with key creatives from MTC’s production of Golden Shield by Anchuli Felicia King.
'Panelists include Golden Shield Director Sarah Goodes, Assistant Director Alice Qin, and Associate Designer Kat Chan, with an introduction by CAAP’s Executive Producer Annette Shun Wah. Writer-performer Diana Nguyen will facilitate the discussion.
'The event will be live-streamed on CAAP’s Facebook page, including audio of questions and comments from the audience.
'Following the discussion will be networking opportunities intended to facilitate connections within the Asian-Australian professional performance community.'

Posted by Kate Herbert at 15:10 No comments:

From Media Release:
'The sequel to their 2017 award-winning art event, The Rapture.


'From the icebergs of Antarctica deep in the snow in silk couture amongst scientists, penguins and distant avalanches; from the red centre of Australia in rich cultural exchange with First Nation genius artists; forests in Denmark, silent movie houses in Berlin, and Rapture’s exhibit at Prague Quadrennial; Moira Finucane lands back into Melbourne to unleash The Rapture Chapter II: Art vs Extinction.


'Welcome to the lair of the Ice Queen; a spike-crowned, jewel-encrusted human glacier dressed in cascading silk, surrounded by porcelain icicles, sculptures of extinct birds, dripping icebergs trapped in ghost nets, she rumbles into life.


'In this apocalyptic cabaret, artists beyond gender and genre sing up an ice storm – torch singer Mama Alto, operatic wonder Piera Dennerstein, 85 year old angel of song Shirley Cattunar and from Marlinja NT, Mudburra artist of profound cultural power, Ray Dimakarri Dixon with songs of standing strong direct from the heart of our country. '
Posted by Kate Herbert at 13:57 No comments: