THEATRE
By Make A Scene, produced by La Mama
At La Mama Courthouse, until May 26, 2019
Reviewer: Kate Herbert
Stars: ***1/2
This review also published in Herald Sun online on Fri 17 May 2019 and in print on Tues 21 May. KH
Pinocchio, a solo performance by Jasper Foley, delightfully blends direct-to-audience narration with hand-held puppets and the physical comedy and masked characters of the Italian Commedia dell’Arte.

In fact, Foley’s Pinocchio resembles the mischievous, impulsive and playful Arlecchino (Harlequin) from the Commedia stable of stock characters.

Created by Foley with Christian Bagin (director) and Rosa Campagnaro (assistant director), the play is based on Carlo Collodi’s original story of the wooden puppet that dreams of being a real boy.

Performing on a space empty except for a box-style puppet theatre in the style of Punch and Judy (design: Eloise Kent), Foley tumbles, prances and poses clownishly, incorporating slapstick routines known as ‘lazzi’ in the Commedia.

Using expressive, leather masks (by A. G. Newman), several puppets, and simple costume changes, Foley populates the stage with a parade of characters, transforming from cheeky, child-like Pinocchio, to ancient Geppetto, or the villainous Phineus Fox.

The exuberant audience of VCE students cheers and participates avidly when Foley invites individuals on stage to don a mask or a peaked cap to play characters in Pinocchio‘s fraught journey, or to create a soundscape for the dark forest.

A few slow scene changes could be tightened, and some narrative moments need clarification, but Foley’s joyful energy rebalances the show.

Although the production is often performed for primary school children, this version includes satirical, topical references to politics, popular music and even Pinocchio’s existential question, “Should I have done Maths Methods instead of Drama?’, a line that elicits a wild cheer from the full house of Drama students.

The sparkly-eyed Foley exudes warmth and charm as he addresses his audience directly and they, in turn, excitedly and willingly suspend their disbelief as Pinocchio’s quirky story unfolds and resolves with a surprise ending. 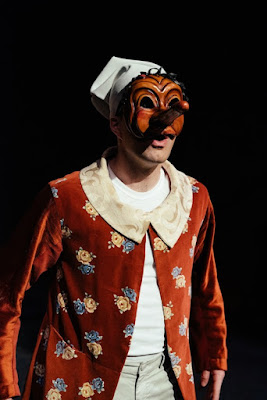 Posted by Kate Herbert at 17:29 No comments:


Music by Cy Coleman; book by Mark Bramble; lyrics by Michael Stewart
At Comedy Theatre, until Sunday June 2, 2019  (at present)

Todd McKenney plays 19th century show promoter, Phineus Taylor (P.T.) Barnum with flamboyant pizzazz as he sings, dances, quips and even tightrope walks his way through Barnum’s chequered show biz career and personal life.
In Barnum: The Circus Musical, directed stylishly here by Tyran Parke, Barnum is depicted as an audacious ideas man, a frivolous, self-absorbed dreamer whose fantastic ideas sometimes came to fruition on the stage or under a big top, and sometimes turned to ashes – literally, in one case.

However, although the subtitle is ‘The story behind the world’s greatest showman’, the truth about this ambitious and driven man may be darker, his character crueller, more flawed and totally self-obsessed.

Or was he just a great PR merchant born before his time? Social media would have been his best friend now.

The songs in Barnum may not be as memorable as other musicals but There’s a Sucker Born Every Minute, One Brick At a Time and Bigger Isn’t Better, amongst others, are all ebullient and singable tunes.

McKenney is mischievously engaging as Barnum, directly addressing the audience and slipping topical references into the dialogue, while Rachael Beck is dignified and fine-voiced as his long-suffering wife, Charity.

Suzie Mathers is perfectly cast as the pet and sweet-voiced soprano, Jenny Lind, AKA the Swedish Nightingale who Barnum promotes in his later shows with varying success. Barnum’s other acts are mostly freaks and oddities, such as The Oldest Woman in the World (Akina Edmonds) and tiny Tom Thumb (Joshua Reckless).

Barnum is a playful entertainment for the family, although it may be a bit too dark and adult for some of the tiny tots who were in the audience at this opening weekend matinee.