A short version of my review was published in Herald Sun on Fri March 9, 2012.  KH 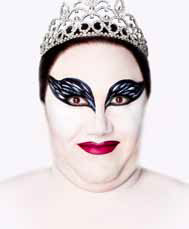 Let’s face it, blokes in drag always get a laugh and, when you put the rotund Trevor Ashley  into a tutu and tiara, the crowd shouldn’t expect meaningful content from such campery.

If you have delicate sensibilities, are looking for art or have refined tastes, then this raunchy cabaret that gives itself an R rating is not your cup of cha.

It is less a psychological drama than a pantomime for adults, a miscellany of bad taste, crass jokes, sexual innuendo, colourful expletives, simulated sex, satirical rewrites of musical theatre songs and gay gags.
Although the show could be slashed to an hour, its highlights are mostly its musical numbers and a few crazy character moments.

Ashley is riotously high camp as the ingenuous Portly, a virginal, anorexic ballerina who auditions for the lead in Swine Lake and must play both the black and white pigs.

She contends with a psychotic mother (Tara Morice), a sleazy choreographer (Brendan Moar) and a talented but sexually provocative dancer (Lisa Adam).

Adam’s salacious dance routine to Go Into Your Dance is deliciously sassy and wicked, Morice’s demented mother is chilling while Moar is suitably handsome and arrogant as the lustful choreographer.

There are plenty of clever, funny parodies of well-known songs about dance from pop tunes (Murder on the Dance Floor, Dancing Queen, What a Feeling) to musical theatre melodies (Everything Was Beautiful At the Ballet, from A Chorus Line).

The vulgar gags get repetitive, the characters’ chatter interrupts the interesting musical parodies and it needs a big edit, but the in-jokes make the crowd roar.