This review published only on this blog. KH 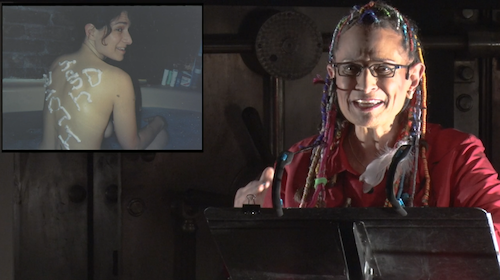 The title of this gently confronting and evocative storytelling performance says it all. It is A Life’s Journey of Sexual Orientation and Gender Expression told by the charming and engaging Zelda (AKA Judith Z. Miller) who opens her heart and her life to the audience.

With her expressive face, sharp features and multi-coloured beaded hair, Zelda reads her equally colourful life’s story while standing at a lectern, imbuing her memories with passion, joy and melancholy as images of her younger self are projected behind her.

Zelda’s tale begins in1950s New Jersey and charts her life from childhood and adolescence and the accompanying sexual awakening, and into adulthood when she discovers theatre and finally finds her tribe of lesbians and her freedom.

Her stories are quirky and funny, distressing and sad, excitable and volatile and intermittently suicidal and tragic.

She has to hide her sexuality through her childhood and adolescence, keeping her females lovers a secret. However, times change sufficiently for her to be able to join public and celebratory marches and festivals for lesbians.

Her stories are peppered with social commentary on gender identity, sexuality and issues of male harassment and, later, male vulnerability.

She talks about gender identity and her own gender fluidity, although she wonders if she needs labels. She dresses in drag as her sassy, male alter-ego and says she feels right as both her feminine and masculine self.

Life for the Queer community now, Zelda says, is so different from her youthful experience being ostracised and hidden as a lesbian.

In the final, moving moments of her performance, Zelda imagines time travelling to visit to her younger self and comforting, advising and reassuring that young Zelda (known then as Judy) with stories that celebrate all the positive achievements that await her in her future.

Que Será Será is truly an epic tale of a coming of age in one’s sexuality and gender identity. 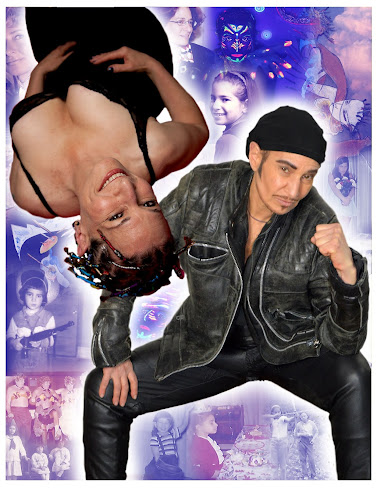 Zelda AKA Judith Z Miller
Posted by Kate Herbert at 12:21