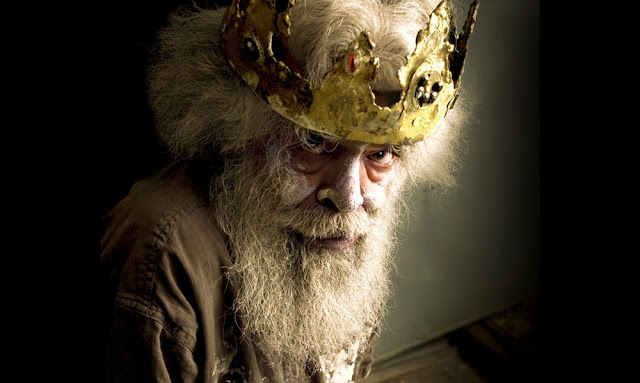 Uncle Jack Charles
Uncle Jack Charles, a Koori elder, indigenous activist and actor, openly admits that he has been a heroin addict and career burglar for much of his 70 years and that he spent 20 years of his life, on and off, in Victorian prisons.

You’d think it might be a stretch (excuse the pun) to sympathise with such a flawed character, a man who was relentlessly bent on destroying people’s peace of mind by burgling their houses, but Jack Charles reformed his ways late in life – and his charm and delight at being with an audience is infectious.

And he apologises – in a fictional appeal to the High Court of Australia, when he presents his case to have his criminal record expunged so his life can continue unhampered by the restrictions that apply to a convicted criminal. As he says himself, it is unlikely to happen.

In his show, Jack Charles V the Crown, Charles looks like a grey-woolly-haired pixie with a wide smile and a deep, resonant voice that sounds of rust and dust and hidden pain.

With impish delight under-laid with melancholy, Charles addresses the audience directly for much of the show, relating anecdotes of his happier, early life in care, then in foster care then, later, in a punishing Boys’ Home where abuse was rife.

The real-life Charles is dwarfed by enormous images of himself projected on a huge screen behind him, showing excerpts from Bastardy, the 2008 documentary about his life in which he bares all, revealing his heroin use, his list of crimes, arrests and court appearances.

In telling the unpalatable details of his life as a Stolen child, his subsequent trauma and his later addiction, crimes and incarceration, Charles’ dialogue, written with John Romeril, effectively merges poetic language with Charles’ disarming, amusing and conversational style and direct delivery.

Rachael Maza directs the show with a gentle hand that allows Charles’ mischievous character to shine as he works on a pottery wheel, talks about running ceramics workshops in prisons, about meeting his unknown siblings and mother, accepting his sexuality, dealing with past trauma, facing addiction and working as an actor on stage and screen.

Charles is not alone on stage, but three musicians join him (Nigel Maclean, Phil Collings, Malcolm Beveridge), underscoring his stories with evocative sound and accompanying Charles as he plays guitar and sings a few of the country music songs he loves.

Jack Charles V the Crown is not perfect theatre, but it has heart and, despite his obvious flaws, Uncle Jack Charles may win over even the hardest critic – perhaps even the High Court?