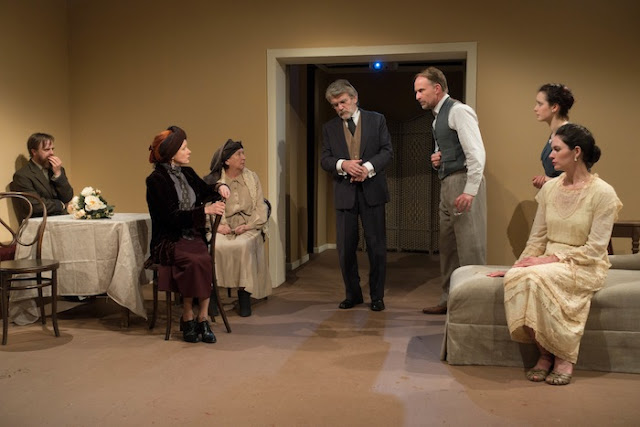 Nadia Tass’s production of Uncle Vanya begins with whimsy and farce tinged with cynicism but, as these late 19th century Russian characters confront the futility of their lives, the mood collapses into despair and grim pessimism.

Tass’s direction of Annie Baker’s modern adaptation of Anton Chekhov’s play focuses on the relationships and has a moody, languorous quality that matches the existential crises that all of the characters face during the play.

The first act is very funny, highlighting the absurdity of their circumstances when the old professor, Serebryakov (Kristof Kaczmarek), returns with his young, beautiful wife, Yelena (Rosie Lockhart), to the family estate, where he upends everyone’s lives with his demands for breakfast at noon and supper at 2am.


David Whiteley captures Vanya’s resentment, frustration and escalating despair as he shifts inexorably from sarcastic criticism of their increasingly slothful lives, to hopeless infatuation with Yelena and, finally, to outrage and fury when Serebryakov announces he will sell the estate.


Ben Prendergast portrays Dr. Astrov, Vanya’s friend and companion-in-vodka, with a mounting wildness that arises from Astrov’s boozing and his own obsession with the lovely but indolent Yelena.

Chekhov wrote ensemble plays and this cast works as a unit to create this lethargic and depressing world of gentry who have lost any sense of purpose and who scratch at each other’s weaknesses until they bleed.


Eva Seymour is an earnest, albeit relentlessly angst-ridden Sonya, Lockhart is a suitably languid and presumptuous Yelena, and Kaczmarek is successfully blustering, vain and insensitive as Serebryakov.

Marta Kaczmarek is a delight playing Marina, the wily, old Nanny who wrangles the adults as if they were still recalcitrant children, while Justin Hosking makes poor, ignored Waffles a sympathetic character, and Olga Makeeva plays an elegant elderly, Maria.

Chekhov’s plays broke the theatrical traditions of the 19th century with their ‘scenes from country life’ and their reflection of real life and real people in real time doing and saying dull and ordinary things.

Sitting through nearly three hours of Chekhov can be excruciating, witnessing these characters drink tea and vodka, talk about trees and struggle with their depression.

However, Tass’s production, although uneven, has enough variety of flavour and detail in tone and delivery to keep an audience interested.