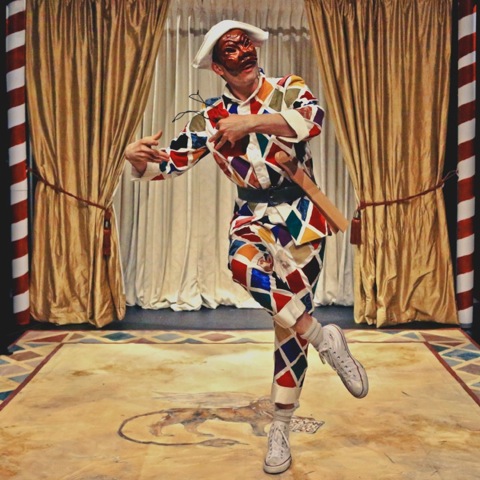 
When you laugh at a comedian’s jokes or a clown’s prat falls, offer some thanks to the improvising, masked players of the mediaeval Commedia dell’Arte, AKA The Italian Comedy, who roved Europe performing their shows outdoors on street carts.

By the time Carlo Goldoni wrote The Servant of Two Masters in 1746, these comedies were performed inside on theatre stages but Goldoni still used the stock, comic, masked characters of miserly masters, cheeky servants and stories of star-crossed lovers that were so familiar to European audiences.

In spirited and funny adaptation directed by Rosa Campagnaro, Christian Bagin is the highlight as Truffaldino, the servant whose decision to serve two masters simultaneously provides plenty of opportunity for mayhem.

The charming Bagin, sporting the traditional, leather half-mask of Harlequin, brings to life the ravenous and lusty Truffaldino, tickling us with his impeccable comic timing, precise physical comedy, inventive improvisation and gleeful engagement with the audience.

Campagnaro’s production pivots on Bagin’s Truffaldino, but he is supported by a vivacious and capable cast including Irene del Pilar Gomez as Pantalona, a female version of the grasping, old miser who marries her daughter, Clarice (Freya Pragt) off for a good dowry.

Lelda Kapsis as the cross-dressing Beatrice, with Darcy Kent as the pompous twit, Florindo, elicit plenty of laughs as the second pair of lovers, while Sharon Davis teases the lads in the audience as the bold and lascivious servant, Smeraldina, although her voice becomes shrill at time.

This production provides a fine example of the Commedia style, masks, characters and narrative for the VCE Drama students attending the play and it is diverting evening for anyone who loves some old-fashioned, physical humour. 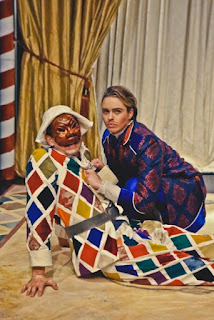